Thousands of demonstrators to defend regional languages, Bretons and Basques particularly mobilized Bayonne (AFP) Basques, Bretons, Catalans, Corsicans or Alsatians: thousands of people demonstrated on Saturday in different cities of France to defend "immersive education" in regional languages, censored by the Constitutional Council. "People are there because they are afraid that associative schools will be closed. The decision of the Constitutional Council could take away all their funding" a 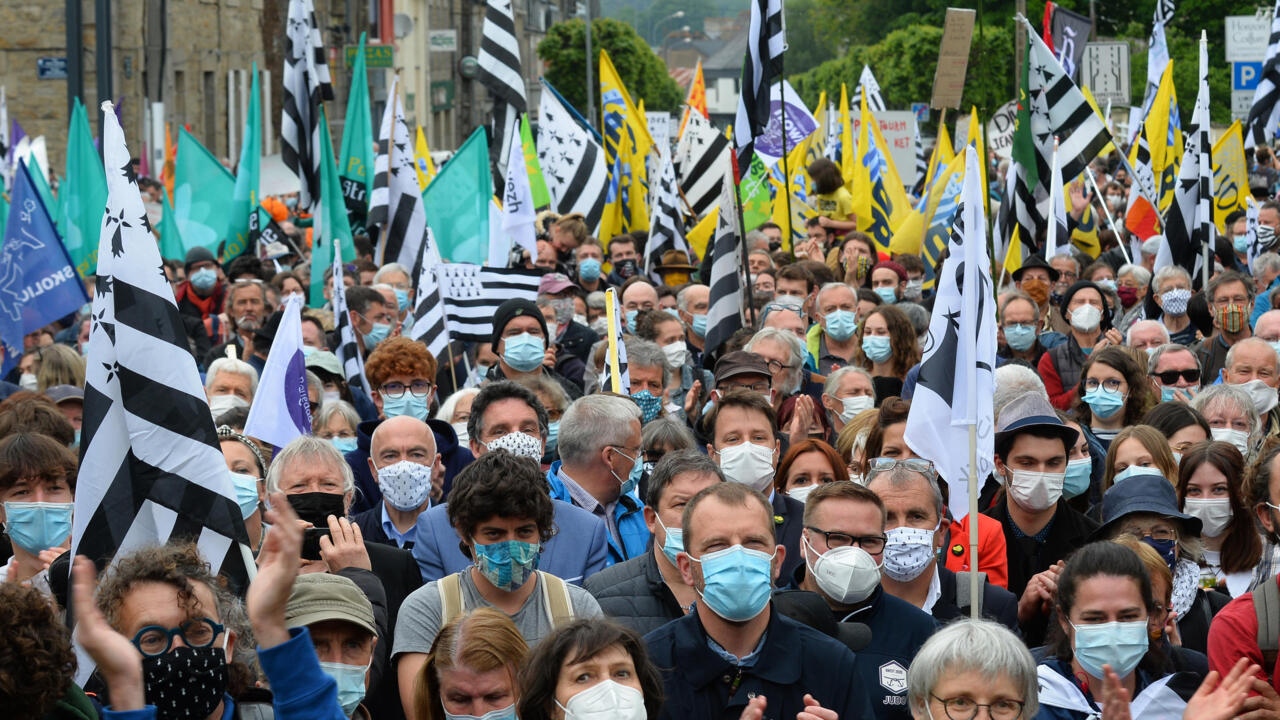 Basques, Bretons, Catalans, Corsicans or Alsatians: thousands of people demonstrated on Saturday in different cities of France to defend "immersive education" in regional languages, censored by the Constitutional Council.

"People are there because they are afraid that associative schools will be closed. The decision of the Constitutional Council could take away all their funding" and "calls into question a teaching method used for more than 50 years", declared to l 'AFP the deputy of Morbihan Paul Molac (Liberties and Territories), present among the 6,000 Breton demonstrators in Guingamp (according to the prefecture, 10,000 according to the organizers).

In Bayonne, 10,000 people according to the organizers, 6,000 according to the police, demonstrated in the streets of the city, in a calm and family atmosphere, but with fierce determination.

"We need solutions so that one in five children in kindergarten is not found unconstitutional at the start of the school year," demanded Peio Jorajuria, president of the Federation of immersive associative schools, known as ikastola, where 5,000 children attend school.

In tight rows, the children marched behind the signs of their respective schools.

Basque, "it's the first language I learned, I like to speak it and I want to continue speaking it at school and outside," said 8-year-old Naroa.

"Overnight we are told that this teaching is quite simply illegal. I am very worried about my language. To say that we are against French is a false argument", fears Arkaitz, who came with his daughter Otxanda, 8 years old.

In Perpignan, a thousand Catalans also marched to the sound of drums, waving "blood and gold" flags.

"It looks like they don't know what an immersive school is. They believe that you don't learn French," lamented Elena Gual, director of the Arrels school, a public immersion school. in Perpignan.

"Yet the academy inspection comes to check regularly and knows that we are doing the job properly. We would like to continue teaching and doing what we have been doing for 40 years," she added.

According to Yann Uguen, president of the associative schools of immersive teaching in Breton Diwan, "we must modify the Constitution" to get out of "the impasse".

"It is a regression, because it is the very principle of the immersive teaching of a regional language which has been declared unconstitutional", also criticized Claude Froehlicher, president of the association of parents of pupils Eltern Alsace, in Colmar, where around 200 people gathered on Saturday under the Alsatian red and white flags.

Cécile Walschaerts' two little girls aged 7 and 5, Belgian married to an Alsatian, did their kindergarten years in Alsatian / German immersion.

"The only way to ensure that my children can become true speakers of Alsatian and later pass on to their children a language that has been in their family for centuries is teaching in immersion", a- she explained.

To learn Alsatian is to enter "a universe of nursery rhymes, legends, games in this language", she put forward, refusing that this learning be reduced to "a folklore".

In Bastia, Corsican polyphonic songs closed at midday the demonstration of a little less than 200 people, including the leader of the independence movement "Corsica Libera" and president of the Assembly of Corsica, Jean-Guy Talamoni, in front of the academic inspection for the defense of the Corsican language.

Two banners were displayed with the message "So that our languages ​​live".

"It is a fundamental mobilization. The Constitutional Council has denied a democratic fact. What is happening is extremely serious. It calls into question all the devices for teaching the Corsican language", launched at the microphone Ghjiseppu Turchini, language teacher Corsica.

In Lille, around forty people called on the rector to teach Picard primary school and recruit Flemish teachers.