The Minister of Energy and Infrastructure, Suhail Al Mazrouei, revealed that the Sheikh Zayed Housing Program has completed the implementation of the first and second groups of the "Mohammed Bin Zayed 1 Residential City" neighborhood project in the Emirate of Ajman, with 497 housing units, and they are being handed over to beneficiaries who have met the required requirements, while 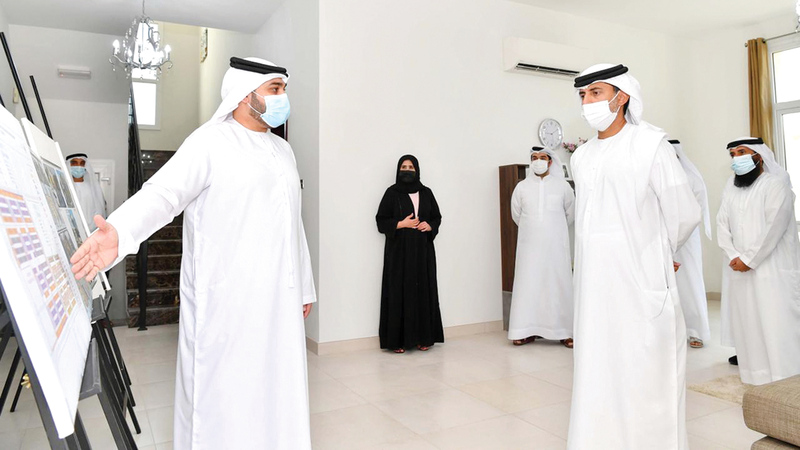 Work is underway to complete 401 homes

Al Mazrouei during his tour of the project implemented by "Zayed Housing" in the Emirate of Ajman.

The Minister of Energy and Infrastructure, Suhail Al Mazrouei, revealed that the Sheikh Zayed Housing Program has completed the implementation of the first and second groups of the “Mohammed Bin Zayed 1 Residential City” project in the Emirate of Ajman, with 497 housing units, and they are being delivered to beneficiaries who meet the required requirements, while work is underway to complete. The third and fourth groups, with a total of 401 residences, point out that the project, which includes the construction of 898 residences, at a total cost of one billion and 100 million dirhams, is expected to be completed during the second quarter of 2022.

Al Mazrouei witnessed, during his tour of the project implemented by the program in the Emirate of Ajman, that the first beneficiary of the project received his home, according to preventive and precautionary measures to limit the spread of the new Corona virus, while he pointed out that the ministry allowed the beneficiaries to reserve their homes through the smart “Zayed neighborhoods” system, which is available via The website of the Ministry of Energy and Infrastructure, which was designed by the program as the first smart government system at the regional level, which enables customers to reserve housing separately, enter through the residence and identify its area, number of rooms and accompanying service facilities, within the scheme, and the system aims to ensure equal opportunities in choosing the location of the dwelling.

Al Mazrouei pointed out that the ministry took into account in the project the implementation of all appropriate service facilities to meet the needs of current and future Emirati families, reflecting the model of an integrated community city, and that in the field of roads, external roads have been completed and work is underway to implement internal roads in the project.

During the visit, Al Mazrouei met with a number of beneficiaries of the housing complex to get acquainted with their perceptions, needs and development proposals to formulate future visions and directions related to the housing sector. He explained that the Ministry of Energy and Infrastructure is working to anticipate the future of housing within the next fifty years project, by translating the ideas and proposals presented, which are considered It serves as a road map for future government housing that keeps pace with the aspirations and needs of UAE citizens and the rapid changes in various walks of life, noting that within the framework of the Ministry of Energy and Infrastructure keeping pace with the goals of sustainable development, the Sheikh Zayed Housing Program was keen to build innovative and sustainable housing in various residential complexes, including the Mohammed Bin City neighborhood Zayed 1, in which the "Zayed 2071" residence was approved as the first residence to obtain the highest environmental assessment in the country.

The project, like the rest of the program’s projects, meets international sustainability standards and environmental requirements, as the program applies the standards of the Sustainability Program and the Pearl System in all its housing projects, and that by applying the sustainability standards in the Muntazi Residential Complex, the housing is expected to achieve high environmental results thanks to its design with the specifications of homes that generate clean energy, and the reduction of income External heat by up to 20%, saving energy consumption by 12%, water by up to 43.3%, recycling construction and organic waste, and improving the internal environment through the use of materials that are not harmful to the environment and the general health of the family.

In turn, Director of the Sheikh Zayed Housing Program, Eng. Jamila Al-Fandi, confirmed that the Ministry of Energy and Infrastructure is keen to provide citizens with high-quality housing that conforms to sustainability standards in order to achieve family stability and well-being for the people of the Emirates, which is a well-established approach to leadership, and pointed out that the construction work in the Mohammed City neighborhood project Bin Zayed 1 Housing Unit, which is implemented by the Ministry in the Emirate of Ajman, and includes the construction of 898 housing units at a total cost of one billion and one hundred million dirhams

It is expected to be completed during the second quarter of 2022, and is on schedule.

The neighborhood of "Mohammed Bin Zayed City 1" consists of four groups, consisting of 11 different residential models: from five bedrooms to two bedrooms, and they have a contemporary and modern style of facades, and 50% of the housing units will be subject to major expansion, while all of them can expand horizontally.

• Construction work in the district of "Mohammed bin Zayed City" includes the construction of 898 houses, at a cost of one billion and 100 million dirhams.