"Gross violation of the convention on diplomatic relations": Moscow protested over the action near the Russian embassy in Kiev

The Russian Foreign Ministry expressed its strong protest in connection with the continuing provocative actions near the Russian embassy in Kiev. On May 26, a rally of nationalists took place near the diplomatic mission, who blocked the central entrance to the building. The department also summoned the Charge d'Affaires of Ukraine to the Russian Federation Vasily Pokotilo. Russian diplomats said that this is another gross violation by the Ukrainian side of the provisions of the Vienna Convention on Diplomatic Relations of 1961. 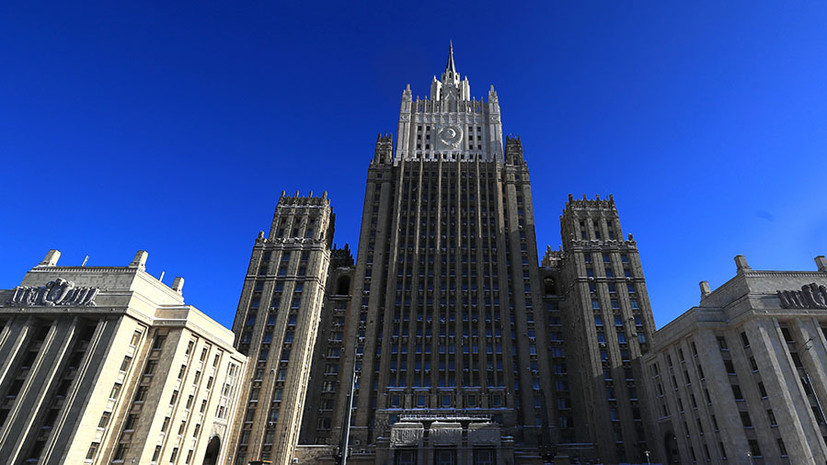 On Friday, May 28, the Russian Ministry of Foreign Affairs summoned the Charge d'Affaires of Ukraine to the Russian Federation Vasily Pokotilo.

Russian diplomats expressed their strong protest in connection with the ongoing provocative actions near the Russian embassy in Kiev.

The Foreign Ministry recalled that on May 26, a "performance" took place near the building of the Russian diplomatic mission in the Ukrainian capital, during which the central entrance to the institution was blocked, as well as threats and insults were made against Russia and the Russian leadership.

“The Ukrainian diplomat was told that the Russian side considers this provocation as another gross violation by Ukraine of the provisions of the Vienna Convention on Diplomatic Relations of 1961,” the message says.

It is noted that the Russian Foreign Ministry demanded that Ukraine take measures to prevent such actions in the future and provide conditions for the normal operation of the Russian diplomatic mission, its security and inviolability.

In addition, the Russian Embassy in Kiev sent a note of protest to the Ukrainian Foreign Ministry in connection with the incident.

As Ukrainian media reported earlier, on May 26, a rally took place near the building of the Russian Embassy in Kiev.

As UNIAN writes, the organizers of the event claimed that it was dedicated to the memory of those killed "for the territorial integrity and independence of Ukraine."

The protesters tried to burn an impromptu model of the Kremlin near the walls of the Russian diplomatic mission, and also hung out near the embassy photographs of the killed "Russian invaders" with a threat to "repeat" the attacks.

Recall that on April 26, the Russian Foreign Ministry announced the expulsion of the diplomat in response to a similar action by the Ukrainian side on April 19.

Then Kiev declared the adviser of the Russian embassy persona non grata because of activities allegedly incompatible with diplomatic status.

The Russian Foreign Ministry stressed that the accusations made by Kiev against the Russian diplomat are unfounded and groundless.

Russian diplomats also drew attention to the fact that Kiev made a decision to declare the counselor of the Russian embassy persona non grata as a "symmetrical" response to the announcement that it was undesirable for the consul of the general consulate of Ukraine in St. Petersburg to stay on the territory of the Russian Federation.

At the same time, the Foreign Ministry recalled, the Ukrainian consular officer had previously been detained for unlawful acts.

According to the FSB, he tried to obtain information of a classified nature during a meeting with a Russian citizen.

The Russian Foreign Ministry issued a warning to the Ukrainian side that additional measures could be taken against Kiev in the event of further hostile actions against Russian diplomatic and consular missions.

Earlier in the month, the Russian side sent other protest notes to Kiev.

In particular, one of them concerned another anti-Russian action in Kiev, which was described by the official representative of the Ministry of Foreign Affairs Maria Zakharova.

According to her, on the evening of April 20, "Ukrainian extremists staged another Russophobic sortie at the walls of the Russian embassy in Kiev."

Also on russian.rt.com "There are no more problems in the country": the Russian Foreign Ministry assessed the messages about Ukraine's sanctions against Rossotrudnichestvo

Zakharova said that the activists blocked the central entrance to the embassy, ​​unfurled posters with insults, and also projected inscriptions using obscene language on the facade of the building using a laser installation.

Russia demanded that Ukraine conduct a thorough investigation of the incident, bring to justice the participants and organizers of this provocation, and take measures to prevent similar incidents in the future.

In addition, in early April, Russia sent a note to Ukraine in connection with the imposition of sanctions against Rossotrudnichestvo.

According to Zakharova, Ukraine, during "another bout of Russophobia," decided to impose sanctions against a number of organizations, one of which was Rossotrudnichestvo.

She called such measures an unfriendly step, which is in direct conflict with the current agreement between the Russian and Ukrainian governments on the establishment and conditions for the operation of information and cultural centers of February 27, 1998.