3 Palestinian journalists were fortunate enough to have survived an Israeli air strike in the northern Gaza Strip during their field work covering the continuous Israeli aggression on the Strip for days. 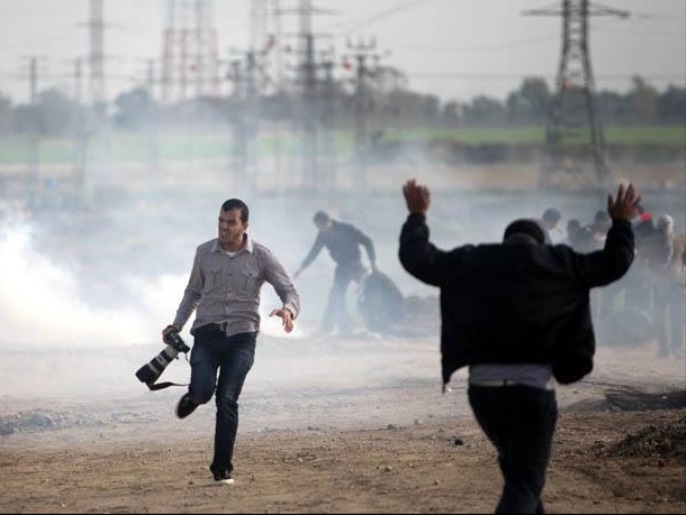 3 Palestinian journalists were fortunate enough to have survived an Israeli air strike in the northern Gaza Strip during their field work covering the continuous Israeli aggression on the Strip for days.

The Turkish Anadolu Agency photographer, Mustafa Hassouna, told Al-Jazeera Net that shrapnel from an Israeli missile hit the back of the car and scattered inside, and had it not been for him wearing a shield (protective jacket) and a helmet that repelled these shrapnel from him, he would not have remained alive, while his colleague Muhammad Al-Aloul was injured in the legs, and a driver was injured The vehicle also injured his body.

The Swiss-based Journalists Support Committee quoted a journalist at Palestine Today, Dawood Abu Al-Kass, that their protective jackets protected them from possible severe injuries that could have killed them.

Journalists who are "naked" are protected

A limited number of Gaza journalists who work for international news agencies and prominent television networks possess protective and safety tools, while many of them work under insecure conditions that pose a real threat to their lives.

Israel prevents the supply of these tools to the Gaza Strip from a large list of goods that it classifies as dual-use materials and claims that it fears that they will reach the resistance.

Hassouna asserted that the journalist's wearing of protective gear greatly protects him from many dangers during his work in the field in times of war and tension, but he asserts that this protection is not the equivalent of "complete immunity", and says that "there are no taboos in the occupation, and he targeted our car despite it being distinguished." From all directions, the word press, in both Arabic and English.

He added, "The place was terrifying, and I asked the driver to walk quickly to get away and I was sensing the danger, and if a missile hit the rear end of the car, and if we were traveling at a lower speed, we would have had a direct and fatal hit."

They reduce the risk, not prevent it

The coach of occupational safety at the International Federation of Journalists, Sami Abu Salem, confirmed to Al-Jazeera Net that the shield, helmet and other safety tools are important for every journalist working in the field, as they reduce the risk that he may be exposed to.

He said, "It does not mean that it reduces the risk that it protects the journalist at all times and from all dangers. In the current reality in Gaza from shelling and bombing raids and missiles, these tools do not provide a complete protection for the journalist, but they remain necessary and important."

Abu Salem gave the example of the martyr journalist Yasser Murtaja, who wore a distinctive shield with the emblem of the press, when the occupation forces targeted him with a bullet that hit him in the stomach, while he was covering the memory of "Earth Day" as part of the activities of the "March of Return" in 2018.

Fadel Shana'a, a photographer for the international "Reuters" agency, was also martyred in 2008 when an Israeli tank shell hit a car marked by press marks in the middle of the Gaza Strip. Abu Salem said, "Fadl was taking all security and safety measures at that time and wearing a shield and helmet."

In the case of the journalist Hassouna, Abu Salem says that the shield and the helmet were credited with protecting him from shrapnel that would have posed a real threat to his life.

He added, "In any case, it is better for a journalist to wear these tools that protect him from some risks, distinguish him from others in the field, and guarantee his rights with insurance companies that do not recognize any journalist who was not wearing them at the time of the injury."

As an international occupational safety trainer, Abu Salem advises journalists who do not have protective gear to reduce their movement in the field and to stay as much as possible in less dangerous places, given that no place is completely safe in Gaza. In his opinion, "This reduces the quality of work and the ability to detect The facts, but the safety of the journalist is more important than any news. "

The rise of the journalist martyr Yasser Murtaja a short while ago, succumbed to his injury on Friday afternoon,

In the absence of these tools in the market, journalists working for local media outlets, or those not affiliated with a specific medium (Freelancers), resort to tailors to sew vests that resemble shields and are distinguished by the word press, but they are not protective and do not provide any protection.

A limited number of journalists succeed in obtaining professional safety equipment from their foreign colleagues, who bring them with them during their visits to Gaza via the Beit Hanoun (Erez) crossing, which is under Israeli control.

While the price of protection tools for a journalist outside Gaza ranges around two thousand dollars, their price may reach 5,000 dollars if someone has them and wants to sell them.

The deputy head of the Palestinian Journalists Syndicate, Dr. Tahsin Al-Astal, told Al-Jazeera Net that Israel places restrictions on foreign journalists and pushes them to sign pledges to return with these means after the end of their mission in Gaza, but many of them leave them to Palestinian colleagues out of sympathy, and they are responsible for disposing of the pledge in their own way upon departure.

He emphasized that the Syndicate had not succeeded in previous times in bringing these means into Gaza, due to the total rejection of Israel, so that the journalist in Gaza would continue to face his fate in the field, and the danger still threatening his life.

According to Al-Astal, Palestinian journalists in the West Bank and Jerusalem do not face this problem, and their access to protection means is much easier than it is in Gaza, but at the same time they are not safe from Israeli targeting and attacks that pursue a policy of silencing and concealing the truth.