Farewell to Academician Wu Mengchao: The farewell time is too short and there are too many things to say

China News Service, May 26, title: Farewell to Academician Wu Mengchao: The farewell time is too short and there are too many things to say   Author: Li Shuyu Li Qiuying   When it is rainy and rainy in the south, vehicles will stop and go to the Shanghai Longhua Funeral Home in an endless stream. On May 26, 2021, the farewell ceremony for the remains of Academician Wu Mengchao was held in Sha 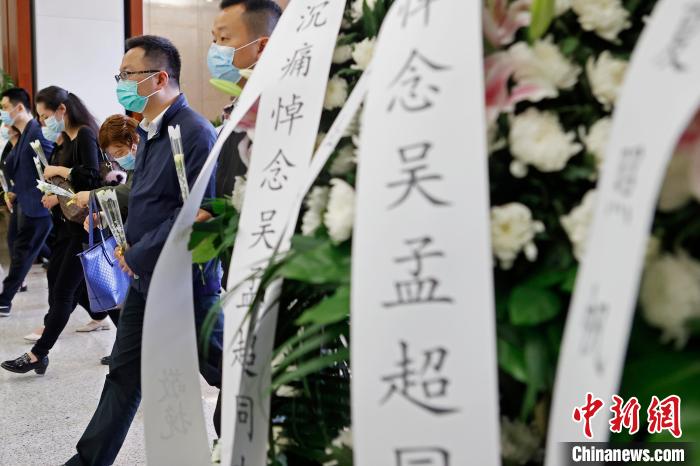 China News Service, May 26, title: Farewell to Academician Wu Mengchao: The farewell time is too short and there are too many things to say

When it is rainy and rainy in the south, vehicles will stop and go to the Shanghai Longhua Funeral Home in an endless stream.

On May 26, 2021, the farewell ceremony for the remains of Academician Wu Mengchao was held in Shanghai Longhua Funeral Home.

"Do you think it's raining here?" The taxi driver Feng Master looked out the car window: "I think it's more like tears." It took nearly an hour for the 5 km journey, but Master Feng didn't see any impatience: " There are too many people saying goodbye. After sending you off, I will also go."

The farewell ceremony for the remains of Wu Mengchao, academician of the Chinese Academy of Sciences and "Father of Chinese Liver Surgery", was held on the 26th at Shanghai Longhua Funeral Home.

At 7 o'clock in the morning, in the drizzle, people from all over the country, holding bouquets in their hands, with tears, lined up in silence to see this respectable old man off.

On May 26, 2021, the farewell ceremony for the remains of Academician Wu Mengchao was held in Shanghai Longhua Funeral Home, and people waited outside the hall of the funeral home.

With more than 70 years of experience in medicine, Wu Mengchao has completed more than 16,000 liver operations, independently innovated more than 30 major medical achievements, and promoted China's liver disease medicine from scratch, from existence to excellence, and made the diagnosis of liver disease in China accurate. , Surgical success rate and postoperative survival rate have reached the world's leading level.

The "navy blue" and medical uniforms that can be seen everywhere outside the funeral home are Wu Laosheng's lifelong love.

Those who rushed to see Old Wu last time were his former comrades-in-arms, students, patients, and many ordinary people who had never known each other but were also touched by Wu's deeds.

On May 26, 2021, the farewell ceremony for the remains of Academician Wu Mengchao was held in Shanghai Longhua Funeral Home. The citizens laid flowers at the flower offering place.

"A good doctor sees illness in his eyes and people in his heart." This is the famous saying of Wu Lao.

As an ordinary person, you may not know much about medicine.

But the "three hearts" left by Mr. Wu-attentiveness, enthusiasm and love, have truly warmed everyone.

The green hedge outside the funeral home is already a sea of ​​flowers today.

White lilies, yellow chrysanthemums, handwritten cards are interlaced in the bouquets-it is the people's nostalgia for this benevolent elder.

If a card is too small, attach another card: the farewell time is too short, and there are too many things to say.

At the flower offering place, some people were holding a thick document bag with hundreds of messages from netizens.

People who have never known each other in the world, at this moment, share their grief.

People who interviewed him said that they thanked Mr. Wu for letting them appreciate what is benevolent love; his patients said that Mr. Wu carefully tucked his clothes every time he finished the examination; he only saw his name in the textbooks, and Old Wu said goodbye enough to make many medical students' eyes red: "You are a role model for me on the way to study medicine" "This life must be my bounden duty to cure diseases and save people"...

Wang Renhua, a citizen of Shanghai, placed a wreath at the flower offering place.

She has been engaged in placement assistance and education for many years. She once sought medical treatment from Lao Wu for prisoners on parole.

"Later, people blamed me, why did you cause trouble to every prisoner, Mr. Wu?" Wang Renhua remembered what Mr. Wu said at the time.

"Old Wu said:'The prisoner is also a human, and he also has the right to live.'" At this point, she couldn't say anything.

On April 13, 2018, Academician Wu Mengchao performed an operation on the patient at the First People's Hospital of Xuzhou City, Jiangsu Province.

Yu Buwei, president of the Anesthesiologists Branch of the Chinese Medical Doctor Association, is a doctoral student of Mr. Wu.

Outside the memorial hall, Yu Buwei looked at the photo of Mr. Wu in his mobile phone.

In the group photo, Wu Lao held his hand tightly, and the two of them smiled and looked at the camera together.

"Old Wu has always been very kind to us, so he held my hand at the time, and I didn't feel any special." Yu Buwei raised his head, tears faintly in his eyes.

"I saw this photo again today, and I felt that it was my happiest moment.

The elegiac couplet hanging in the memorial hall outlines the life of this medical master: "A generation of masters who lay down their livers and courage, Rio Tinto's medical career model, peach Tao and Yu Li, cast a sincere doctor."

The old Wu in the portrait is smiling and looking lovingly.

The people who came to say goodbye bowed deeply to the portrait three times.

On January 28, 2017, Academician Wu Mengchao went to all floors of the hospital as usual on the first day of the Lunar New Year, sending Chinese New Year blessings to the medical staff who stood by their posts.

The "Internationale" that Mr. Wu loved during his lifetime echoed in the memorial hall, and the solemn and solemn atmosphere also contained a firm strength.

"If I really fall on the operating table one day, it may be my greatest happiness." Wu Mengchao said this sentence for many years.

He has been in medicine for more than seventy years, and his "fighting posture" has always been consistent.

On January 28, 2017, the first day of the Lunar New Year, Academician Wu Mengchao went to the hospital ward to visit patients as usual, and at the same time gave New Year greetings.

For Wu Mengchao, even retirement does not mean stepping off the battlefield: "As long as my country's liver cancer power has not been thrown into the Pacific, I will continue to fight!"

The "war" with the disease stems from his "love" for the people.

"I once thought of giving up studying medicine countless times," Dr. Li of Hepatobiliary Surgery wiped away the tears from the corners of his eyes. "But Lao Wu said,'Only inexhaustible love can illuminate the suffering souls'."

On August 31, 2017, Academician Wu Mengchao marched the military salute at the symposium.

"You are a star in the sky, and even a beacon on earth." This sentence was written on the bouquet card.

When we look up at the starry sky, the star named after Wu Lao is shining brightly; when we look inside, this lighthouse will also illuminate the way forward.