US Secretary of State Anthony Blinken met with Egyptian President Abdel Fattah El-Sisi yesterday, upon his arrival in Cairo, which played a major role in reaching a ceasefire between Israel and the Palestinians that he hopes to establish. 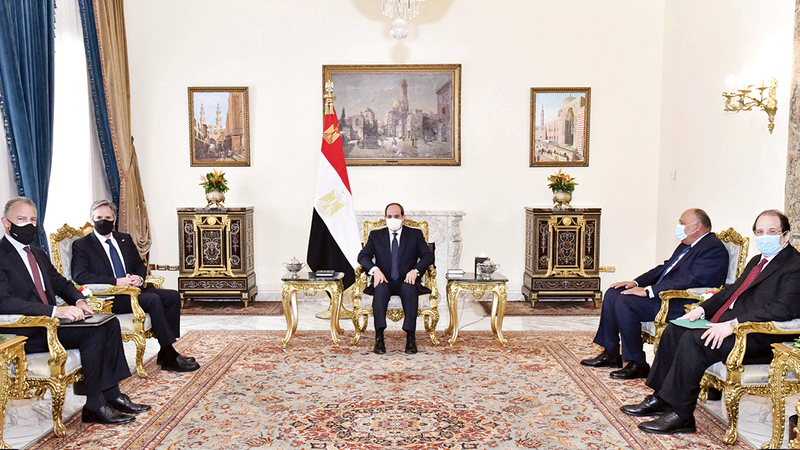 Al-Sisi during his meeting with Blinken on confirming the truce agreement between Israel and the Palestinians.

US Secretary of State Anthony Blinken met with Egyptian President Abdel Fattah Al-Sisi yesterday, upon his arrival in Cairo, which played a major role in reaching a ceasefire between Israel and the Palestinians that he hopes to establish, while Palestinian President Mahmoud Abbas called for work to stabilize the truce agreement With Israel in the entire Palestinian territories and support efforts to rebuild the Gaza Strip.

The meeting between Blinken and Sisi lasted nearly an hour and a half, and was attended by Egyptian Foreign Minister Sameh Shoukry, and General Intelligence Chief Abbas Kamel, the agency in charge of the mediation file between the Palestinians and Israel.

In addition, Blinken said, addressing the US embassy staff in Cairo, that the United States and Egypt are cooperating in order for the Palestinians and Israelis to live in peace and security.

He added, “We in Egypt have a real and effective partner in dealing with violence and ending it relatively quickly.

Now we are working closely together to build something positive. ”

Before heading to Cairo, Blinken met Israeli President Reuven Rivlin yesterday morning and thanked him, in a tweet on Twitter, for his "pursuit of coexistence, tolerance and peace."

Blinken said in a statement that the United States "is in the process of granting aid" to the Palestinians of more than 360 million dollars, including 38 million dollars in humanitarian aid.

He affirmed that he is working with the US Congress to grant economic aid for development worth $ 75 million, in addition to giving $ 5.5 million in urgent aid to Gaza, parts of which were destroyed by the Israeli bombing.

But Blinken stressed that the aid should not go to Hamas, which "brought nothing but misery and despair" to Gaza, as he put it.

Blinken pledged yesterday to restore contacts with the Palestinians and defend Israel at the start of his Middle East tour.

The US Secretary of State met, the day before yesterday, the Israeli Prime Minister Benjamin Netanyahu, in occupied Jerusalem, before meeting with Palestinian President Mahmoud Abbas, in Ramallah, where he said that he hopes to "rebuild" the relationship between the United States and the Palestinians with the "right of Israel" to Defend itself.

Blinken noted that "it is possible to resume efforts to reach a solution based on the two states" of Israel and Palestine.

He said that this solution, which is supported by the international community and neglected by the administration of former US President Donald Trump, remains "the only way to secure the future of Israel as a Jewish and democratic state, while at the same time granting the Palestinians the state they deserve."

For his part, British Foreign Secretary Dominic Raab called yesterday for Israel and the Palestinians to end the "cycle of violence" through the two-state solution, ahead of his lightning visit yesterday to Jerusalem and Ramallah.

The Egyptian mediators are active in installing the unconditional ceasefire, which did not indicate any plan to rebuild Gaza.

Egypt sent medical and food aid to the Gaza Strip last week through the Rafah border crossing, which is the only point of contact for Gaza with the outside world that is not controlled by Israel.

Last week, before the ceasefire was reached, Egypt promised to provide $ 500 million in aid for the reconstruction of Gaza, with Egyptian companies assigned to carry out these actions.

Egypt was the first Arab country to sign a peace treaty with Israel in 1979.

For his part, President Abbas called for work to stabilize the truce agreement with Israel in the entire Palestinian territories, and stressed in a statement after his meeting in Ramallah, British Foreign Minister Dominic Raab, the importance of working to stop the "attacks" of settlers backed by Israeli forces in the West Bank. Including Jerusalem.

The statement quoted the British Foreign Secretary as stressing his country's position in support of the two-state solution and Britain's willingness to support peace efforts between the Palestinians and Israelis, and to continue working to support the Palestinian people and build their institutions and economy.

This comes at a time when the "central" Israeli court in occupied Jerusalem postponed yesterday a decision on the issue of displacing Palestinian families from the Batn Al-Hawa neighborhood in the town of Silwan, south of Al-Aqsa Mosque.

According to the Palestinian News and Information Agency (WAFA), the court held a session to consider decisions to displace six of the 86 apartments in Batn al-Hawa neighborhood in Silwan.

The agency quoted the head of the Defense Committee for Silwan's lands and real estate, Fakhri Abu Dhiab, a researcher in Jerusalem affairs, as saying that "the events that took place in the Sheikh Jarrah neighborhood prevented the court from issuing a decision in favor of the settlers."

He added that "the decision to evacuate the homes is a political and not a judicial one," stressing that "the solidarity activists will remain present in Batn Al-Hawa neighborhood to support the steadfastness of the people."

• Blinken says that the United States and Egypt are cooperating so that the Palestinians and Israelis live in peace and security.