Hometown people braved the rain to remember Wu Mengchao: "We are waiting for you to come back" 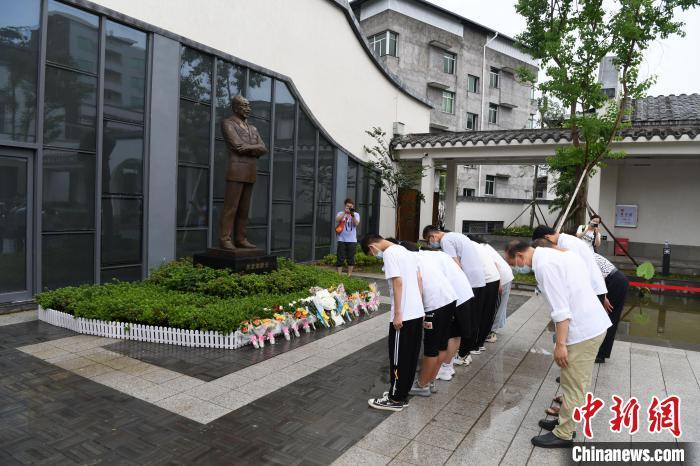 China News Service, Fuzhou, Minqing, May 24th. Title: Hometown people braved the rain to remember Wu Mengchao: "We are waiting for you to come back."

On May 24, Fuzhou, the heavy rain continued.

Fuzhou folks bowed in memory of Wu Mengchao three times before the sculpture.

Wu Mengchao, an academician of the Chinese Academy of Sciences and a returnee from Malaysia who was known as the "father of Chinese hepatobiliary surgery", died in Shanghai at 13:02 on May 22 at the age of 99.

In 1922, Wu Mengchao was born in Houlong Village.

At the age of 5, he left his hometown with his mother and went to Malaysia.

When he returns to his hometown, the "shrimp oil smell" in the accent remains the same, but the old boy has become a generation of famous doctors.

After returning home several times, his medical ethics and nostalgia are remembered by the people in his hometown.

"It was 1986. As soon as my eldest brother and sister-in-law came back, they opened an outpatient clinic at the Overseas Chinese Travel Agency in the county square. The eldest brother looked at the liver and gallbladder, the sister-in-law went to the gynecology department, and provided free consultations for the folks." Speaking of Wu Mengchao's first return home, Wu Mengchao's "Heart" was burned in the mind of his cousin Wu Mengzhong.

Wu Mengzhong, who also works in the hospital, serves as a "triage" for Wu Mengchao and his wife: those who come from deep mountains and remote villages will look first, and those who live near the city will look later.

"A lot of people came here admiringly. It was after twelve o'clock and one o'clock in the afternoon, and they couldn't eat food. He said he was used to it."

Wu Mengzhong still remembers that, as a medical master, Wu Mengchao warned his relatives and disciples, "I have no power, I will only see a doctor and have surgery, and other ideas about promotion and wealth, don't come to me."

On the same day, Fuzhou also has the Sanfang Qixiang Wu Mengchao Advanced Deeds Exhibition Hall, and the Mengchao Hepatobiliary Hospital of Fujian Medical University also set up a condolence hall to express the common grief of the hometown people to Academician Wu Mengchao.

In the condolence hall of the Mengchao Hepatobiliary Hospital of Fujian Medical University, Cui Linsheng, the deputy head nurse of the hospital, recalled to reporters two experiences of working as a health nurse for Wu Mengchao returning to his hometown.

She said that the first meeting was in January 2017. Wu Mengchao returned to his hometown to attend the World Fuzhou Shiyi Spring Festival Gala. "He has a great reputation and we are all nervous. As a result, he smiled and said,'Don't call an academician, call Grandpa'. We all call him "Grandpa Laughing"."

In September of the same year, Wu Mengchao returned to his hometown to participate in academic activities.

Cui Linsheng noticed that Wu Mengchao always sits at the desk for a long time before going to bed every day. Once she quietly took a closer look, only to find that the old man was writing a diary.

"He developed the habit of writing a medical diary when he was young and kept it for a lifetime. Such perseverance is our spiritual wealth."

Entering the condolence hall of Mengchao Hepatobiliary Hospital of Fujian Medical University, Huang Yao, a doctoral student of Wu Mengchao and deputy chief surgeon of the hospital, was reluctant to leave for a long time.

"Wu Laochang said to us, let others enjoy the glory of the'Master of Man', I only pray that you will fulfill your vocation as a'man among the people'." Huang Yao kept in mind the teacher's indoctrination.

In the Academician Wu Mengchao's pavilion, the trajectory diagram of the asteroid No. 17606 named "Wu Mengchao Xing", several foundation works on hepatobiliary surgery, and the "National Science and Technology Progress Award" medals... each of the exhibits are silent, telling this. The home and country conditions of a returned overseas Chinese academician are stunned.

In the past ten years, Wu Mengchao has returned to his hometown more than ten times, showing his nostalgia for his homeland.

Wu Mengzhong told reporters that a few years ago, after Mrs. Wu Mengchao passed away, the villagers welcomed her back to the Wu Family Ancestral Hall in Houlong Village; the old man once told him that when he was gone, he would go home.

"We are waiting for you to come back." Immerged in the memories of the past, Wu Mengzhong was unable to extricate himself for a while.

An operation notice displayed in the Academician Wu Mengchao's hall impressed Wu Jinfeng, the niece of Wu Mengchao's niece the most.

On March 15, 2019, when the Eastern Hepatobiliary Surgery Hospital of the Second Military Medical University issued this operation notice, Wu Mengchao performed a liver tumor resection and cholecystectomy for a 66-year-old male patient, which took three and a half hours.

"This is the last operation performed by Uncle Surgery. He was 97 years old." Standing in the Wu Mengchao Academician's Hall, Wu Jinfeng stared at Wu Mengchao's live images on the screen, and said softly, "We are waiting for you to come back and have a good rest. ."(Finish)