The last farewell to Battiato, private funeral in the small church of his villa in Milo

A security service is planned in anticipation that groups of admirers move on pilgrimage to Milo as they had already done with affection two years ago. The mayor, Alfio Cosentino has proclaimed the city mourning 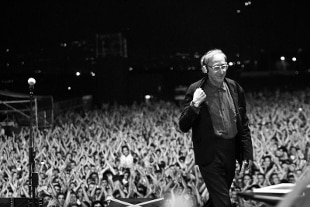 May 19, 2021The funeral of Franco Battiato will be held in the late morning in the small church inside the master's villa, Villa Grazia, the home of Milo (in the province of Catania) that the Catania singer-songwriter had dedicated to his mother. A security service is planned in anticipation that groups of admirers will move on pilgrimage to Milo as they had already done with affection two years ago. The funeral rite will be officiated by Father Orazio Barbarino, parish priest of a church in Linguaglossa and a priest from Milan, a friend of Battiato's brother. The body of the singer-songwriter, by his specific will, will be cremated and the remains will return to Villa Grazia. The mayor of Milo, Alfio Cosentino, has proclaimed the city mourning.

According to the account of his brother Michele in an interview with Corriere della Sera, Franco Battiato "did not notice the passing away" because "luckily for him he was enveloped in a deep coma". Michele Battiato also explained that "the funeral will be strictly private" because it is "an intimate and private moment that cannot be violated by interviews and cameras". When he closed his eyes forever, the artist was not alone, but, as his brother reveals, "surrounded by me, my wife, nephews, collaborators and two doctors who never left us". Michele remembers his brother Franco's 76th birthday: "He was happy with the little party, he even managed to taste the cake".

"A sincere and honest spiritual researcher, an artist who had made the search for the divine a purpose in life", said Father Guidalberto Bormolini, a monk and theologian, recalling Battiato to Vatican Radio, whose funeral he celebrates. "Battiato - he explained - was deeply convinced that death represented a door to access a spiritual mystery of beauty and, in the last years of his life, he had come very close to Christianity. For about eight years we had had a close, intense relationship, of friendship and also of strong spiritual exchange. In particular - he added -, we had collaborated on the documentary 'Crossing the Bardo', dedicated to the meaning of death in Western and Eastern cultures, also holding many public meetings to present it. 'private friendship that characterized our relationship ", says the monk.