In Montalcino Schmid wins but Egan Bernal is still flying

The Swiss sprinted Alessandro Covi at the end of a breakaway that lasted for the entire fraction. The Colombian pink jersey gives another great show of strength and wins over everyone. Collapses on Evenepoel dirt roads 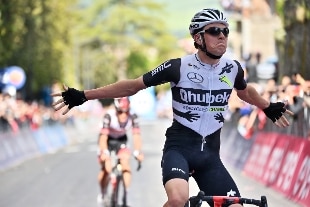 19 May 2021From Umbria to Tuscany, in Val d'Orcia, the Giro d'Italia gets back on track after the first day of rest. The eleventh stage 'of the wine' Perugia-Montalcino (162 km), very scenic but also extremely treacherous due to the many and dusty dirt roads (all concentrated from -70 onwards), sees the success of the 21-year-old Swiss Mauro Schmid (first victory since professional) who beats the Piedmontese Alessandro Covi in ​​a sprint, both splendid 'survivors' of the day's breakaway, which began after a few rides. Italy, which continues to collect second places, is still dry. Third at 26 ”was the Belgian Vanhoucke.

The Colombian Egan Bernal (11th), who arrived 3'09 "behind the winner, strengthens the pink jersey showing great leg and stretching over his opponents in the final. In crisis on the dirt roads Remco Evenepoel: the Belgian comes off in the third section of dirt road about 20 km from the finish line and will suffer a delay of 2'08 "from the leader of the race. Giulio Ciccone and Vincenzo Nibali also pay duty, who lost the wheels of the big group in the last climb of the day, the Passo del Lume On the other hand, the damage contains a brilliant Vlasov, now second in the general at 45 "behind Bernal. Third place for Damiano Caruso at 1'12".

Tomorrow the twelfth stage is scheduled, 212 kilometers from Siena to Bagno di Romagna with four climbs and 3700 meters in altitude.