Childhood in the Israeli-Palestinian conflict: When the bomb fell, the parents lied to be fireworks

China News Service, May 19, "When the bomb fell like raindrops, the parents in Gaza desperately tried to appease the terrified children. They would tell the youngest child that this was just fireworks, or tried to show off a joy. Face." The Associated Press issued a statement on the 19th. Violent conflicts between armed groups in the Palestinian Gaza Strip and Israel are still escalating, and ch 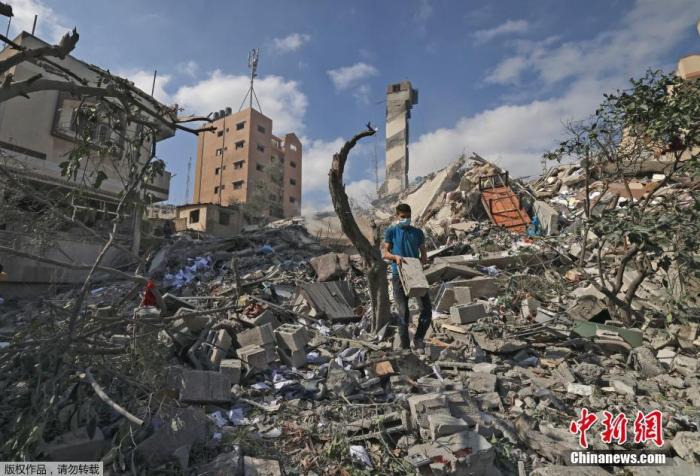 China News Service, May 19, "When the bomb fell like raindrops, the parents in Gaza desperately tried to appease the terrified children. They would tell the youngest child that this was just fireworks, or tried to show off a joy. Face." The Associated Press issued a statement on the 19th.

Violent conflicts between armed groups in the Palestinian Gaza Strip and Israel are still escalating, and children are suffering tremendously.

On May 18, 2021, local time, in the Gaza area, the Palestinian-Israeli conflict continued, and the Gaza Strip continued to encounter air strikes. Many houses were affected by the war and the streets were devastated.

On May 16, the Ishkantana family living in the Gaza Strip suffered an extinction after an Israeli air strike against the area.

The airstrike came without warning.

After Israel declared that a tunnel system in Hamas was targeted and carried out a large-scale bombing of the center of Gaza, the Ishkontana family was buried under the rubble.

Father Riad Ishkantana described the process of being trapped-he was buried under the rubble for 5 hours, and a large block of concrete was heavily pressed on him.

During this period, he was unable to contact his wife and 5 children at all.

"I heard their voices under the gravel. I heard Dana and Zain yelling:'Daddy! Daddy!' Then their voices disappeared. I realized that they were dead." Yad recalled painfully.

In the early morning of May 17, 2021, local time, Israeli warplanes continued to strike the Palestinian Gaza Strip. Fire and smoke rose over buildings in the Gaza Strip.

The picture shows the Pakistani armed personnel responding with rockets.

After Riad was rescued and sent to the hospital, his relatives and staff tried to conceal the news of the death of his family from him as much as possible.

However, he still learned the truth.

"I heard about their deaths one by one," Riad said, but in the end, he learned that Susie had survived.

Susie is the second of five children and the only survivor among them.

Paediatrician Zuhai Algarro said that Susie spent 7 hours under the ruins and only had some bruises on her body, but she was "severely traumatized and frightened."

Algarro also said that the hospital could not provide the psychological treatment she needed.

During the hours that Susie was buried under the rubble, her siblings and mother died by her side one after another.

"She was in a deep depression," Algarro said. It was not until the 18th that Susie was allowed to leave the hospital briefly and met her cousins.

When his father Riad was interviewed by reporters, Susie sat on the bed next to his father, silently observing the faces of people in the room, and seldom made eye contact with them.

When asked what she wanted to do when she grew up, Susie turned around.

However, when her father began to answer for her, saying that she wanted to be a doctor, Susie began to cry loudly.

Recently, 42-year-old Riad stopped the work of the waiter due to restrictions on the new crown epidemic.

He said that Susie is smart, proficient in science and technology, and likes smartphones and tablets.

Riad also said that Susie also likes to learn and would gather all her brothers and sisters in a "class" and then act as their teacher.

On May 12, local time, during an Israeli air strike on Gaza City, a missile landed on a tower, and the high-rise building instantly collapsed and "disappeared" among the buildings.

The tragedy of the Ishkantana family is just a microcosm of this crisis.

On social media in Gaza, segments of videos recorded the grief of those families who were destroyed in an instant, as well as those of survivors who lost everything.

"There are four people! Where are they? Four!" A father lamented outside the hospital after learning that his four children were all dead; in another video, a little boy screamed and yelled "Dad" ", while running to the front of the funeral procession-there, people were carrying his father's body to prepare for burial.

According to Gaza health officials, 217 Palestinians have died in Gaza since May 10, including at least 63 children.

On the Israeli side, 12 people died, including 11 civilians and a 5-year-old boy.

The Associated Press further pointed out that "every time, Israel launched a violent air strike against the densely populated Gaza Strip, vowing to prevent Hamas from launching rockets to Israel."

"When the bombs rained down, the parents in Gaza desperately tried to appease their terrified children. They would tell the youngest child that it was just fireworks, or tried to put on a happy face." The Associated Press Pointed out.