Clashes, injuries and a general strike in the West Bank and within the Green Line in protest against the Israeli attacks

Al-Jazeera correspondent in Al-Bireh in the northern West Bank reported that two Israeli soldiers were wounded after they were shot at, while dozens of Palestinians were injured during the demonstrations in many West Bank cities. 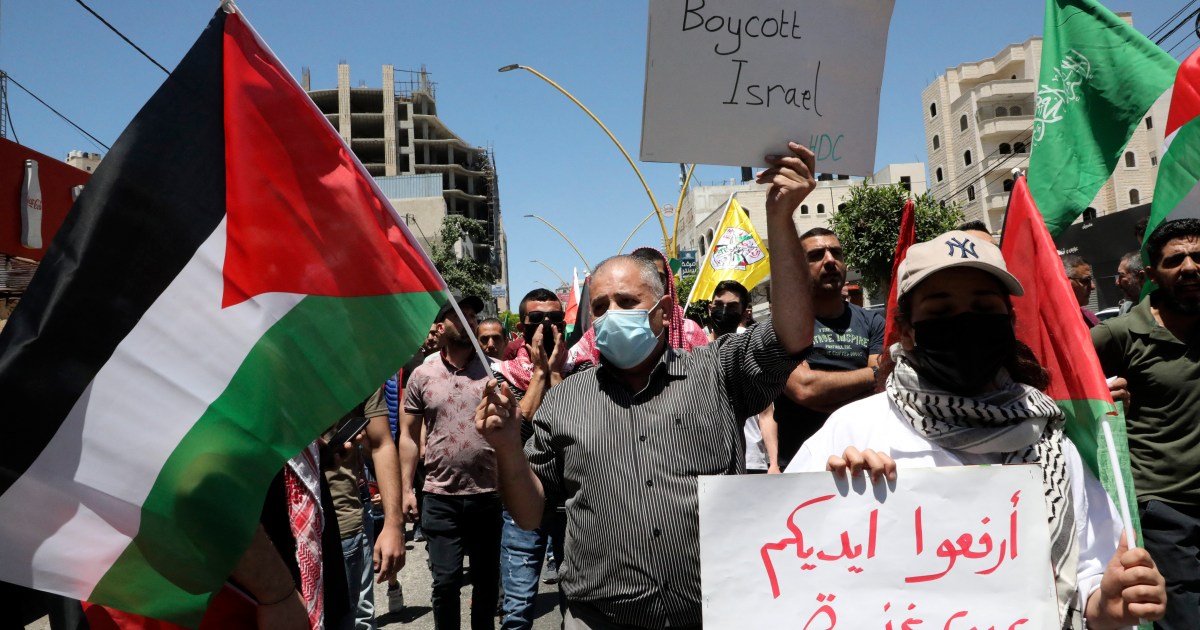 Al-Jazeera correspondent in Al-Bireh in the northern West Bank reported that two Israeli soldiers were wounded after being shot at, while dozens of Palestinians were injured during the demonstrations in several cities in the West Bank, and many of them were transported by ambulances to hospitals.

Since the morning hours, the total strike has spread to the cities of the West Bank - including East Jerusalem and cities and towns within the Green Line - in response to popular and official calls in solidarity with the Gaza Strip and rejecting the continuous Israeli attacks on the Strip and Jerusalem.

All commercial stores and private sectors were closed except for medical centers, while working hours in the educational sector at all levels were suspended.

The Palestinian government announced the suspension of work today, Tuesday, in order for employees to participate in the rallies that began at midday, while Hamas called in a statement on Monday, residents of the West Bank and 48 Palestinians to strike a comprehensive strike and confront the occupation forces with demonstrations.

Yesterday, in a statement, Fatah called on the Palestinians to participate in marches and demonstrations starting from city centers and "peaceful" confrontations with the occupation army and settlers.

And it coincided with the calls of Hamas and Fatah, the call of the Higher Arab Follow-up Committee in the 1948 territories for a general and comprehensive strike in the Arab sector within the Green Line "in response to the continuous Israeli aggression against our Palestinian people."

In Ramallah and Al-Bireh, several thousand people carried Palestinian flags and chanted slogans in support of "the resistance." The demonstration reached an Israeli military checkpoint north of the city separating it from the headquarters of the Israeli Civil Administration at the Beit El checkpoint.

The youths closed the road with burning tires, while a large number of the occupation army personnel stationed on a nearby hill in anticipation of a confrontation with the protesters.

Gunmen in Ramallah shoot in the air and say, "We have been absent for a long time, but now we announce the reactivation of the Al-Aqsa Martyrs Brigades" pic.twitter.com/mAE20tgYNU

Yesterday night, Monday, the city of Ramallah witnessed armed men from the Al Aqsa Martyrs Brigades, the armed wing of the Fatah movement, taking to the streets, firing live bullets in the air, and threatening in a video clip broadcast yesterday that the occupation forces will return to military operations in the West Bank.

Today, the cities of Hebron, Bethlehem, Nablus and Jerusalem witnessed demonstrations in which clashes took place with the occupation forces, which resulted in dozens of Palestinians being wounded, in addition to many cases of suffocation due to the heavy occupation firing tear gas canisters.

The Palestinian Ministry of Health stated that two people wounded by live bullets in the foot were taken from the confrontation sites in Hebron to the hospital for treatment.

A mass march took place from Al-Hussein Mosque in the Ain Sarah area to the Ibn Rushd roundabout and the friction areas in Bab Al-Zawiya in the center of Hebron.

The participants raised the flag of Palestine and chanted condemning the occupation's crimes against the citizens and their property.

Several neighborhoods in East Jerusalem witnessed protests and confrontations with the occupation forces, concentrated in the Bab al-Amud and Sheikh Jarrah neighborhoods.

Activists transmitted a video clip of the occupation soldiers beating a girl, then taking her for arrest.

Today, the occupation forces, backed by cavalry, stormed the Sheikh Jarrah neighborhood in occupied Jerusalem, attacked the people in solidarity with them, and attacked a Palestinian youth before driving him, and also attacked women in a car in the neighborhood.

In addition, hit-and-run operations are taking place between the residents and those in solidarity with them and the Israeli police forces that are present in the neighborhood in large numbers.

The protest and support demonstration for Gaza in the city of # Nazareth in the occupied Palestinian interior, coinciding with the general strike pic.twitter.com/cquolD86zC

Inside the green line

Within the Green Line, demonstrations took place in Nazareth, the largest Arab city there, in conjunction with others in Jaffa and other cities.

Protesters set fire to Israeli police cars in the town of Kafr Qasim, near Jaffa.

Clashes between the Israeli police and youths that broke out on Tuesday morning in Kafr Qasem resulted in injuries due to sound bombs fired by the police to disperse the protesters, as well as a campaign of arrests.