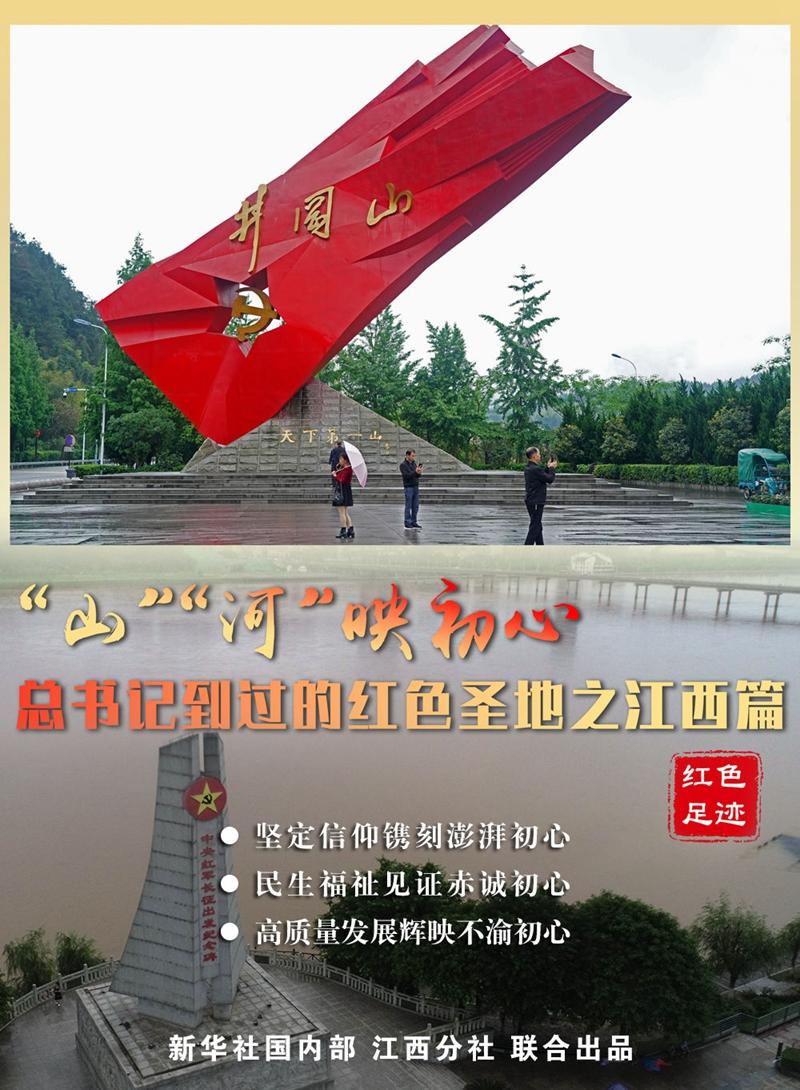 The towering Jinggang Mountains, the peaks and mountains, the sparks of the Chinese revolution set a prairie fire here;

Rushing over the Du River, winding and beautiful, the Central Red Army assembled here and embarked on the Long March Road.

Mountains and rivers serve as monuments, and history testifies.

Today, following the red footprint in Jinggangshan and Yudu, Jiangxi, the old place of thousands of miles has changed from the old to the new. This red land, which carries the original intention and mission, is struggling to write a magnificent picture of the new era.

Jinggangshan, Jiangxi, where the Communist Party of China established the first rural revolutionary base—the Jinggangshan Revolutionary Base, ignited the spark of "surrounding the city from the countryside and seizing power by armed force."

During the two years and four months of struggle in Jinggangshan, nearly 48,000 heroes were sacrificed, and an average of nearly 60 people lost their lives every day.

In the condolence hall of the memorial hall, he presented a flower basket to the revolutionary martyrs and bowed three times.

Later, he also came to the former revolutionary site group of the Octagonal Tower in Jinggangshan.

While listening to the explanation, Xi Jinping asked for relevant details.

Xi Jinping pointed out that the Chinese nation is a nation that admires heroes, makes heroes, and produces heroes in large numbers. The era of peace also needs heroic feelings.

"The general secretary's respect for the revolutionary ancestors and red history taught me a profound lesson. I want to use more vivid explanations to let the spirit of Jinggangshan infect more people." Zhang Jing, an instructor from the Martyrs Cemetery, told Xi Jinping at that time. The general secretary introduced the stories of revolutionary ancestors such as Li Jukui and Zeng Zhi, and martyrs such as Hu Shaohai and Wu Ruolan. The experience of this explanation made her unforgettable.

In October 1934, the central organs, the Central Military Commission and the main forces of the Central Red Army assembled here and set off on a long journey.

During the Soviet period, in Yudu County with a population of more than 300,000, almost 1 out of 5 people joined the Red Army; on the Long March, an average of one Yudu martyr fell every kilometer.

“During the visit, the General Secretary stopped to observe from time to time. From his words and deeds, we felt his deep red feelings.” Recalling the scene at that time, Zhong Min, deputy curator of the Central Red Army’s Long March Departure Memorial Hall, was still excited.” Remembering history is to keep moving forward. We must tell the story of the Long March well, educate people with the spirit of the Long March, and let the red gene pass on from generation to generation."

【Inheritance of Faith · “Mountains” and “Rivers” Mirroring Each Other】

Today, this red land has become a spiritual highland for people to absorb the power of faith.

In Yudu, revolutionary traditional education has become a compulsory course for local students.

The Changzhengyuan Primary School in Yudu County is located next to the memorial park where the Central Red Army’s Long March departs. The teachers and students of the school play the red suona, be good "red baby narrators", tell red stories, use red textbooks, and sing classic red songs. Such activities have allowed the Long March spirit to be passed on from generation to generation.

The reporter came to Shenshan Village, Jinggangshan City along the brand-new mountain road. The "smiley wall" beside the road was particularly eye-catching. The smiling faces of many poverty-stricken villagers were put together into a love shape, setting the scene for the more and more prosperous life of the villagers. .

He pointed out that on the road to poverty alleviation, one cannot leave a poor family and a poor masses behind.

In the poor household Zhang Chengde's house, Xi Jinping inspected the houses one by one, sat down to calculate the income and expenditure accounts with the couple, and asked what the family had grown and raised, and what difficulties and needs existed in food, clothing, housing and transportation.

Recently, villager Zhang Chengde’s family has had a lot of things: the business of homestays and farmhouses is booming; the youngest son who is going to work in the village decides to stay in the village and he has an extra companion; what makes Zhang Chengde and his wife Peng Xiaying the most happy is that the eldest son is married.

"At that time, the General Secretary held my hand and encouraged me to build up the confidence to get rid of poverty and become rich. Now the dream of getting rich and going well-off has been realized, and life is becoming sweeter and sweeter like glutinous rice cakes!" said Peng Xiaying.

Behind the good life of Zhang Chengde's family is the great changes in the mountain villages of Shenshan Village and even Jinggangshan.

With the support of poverty alleviation policies, rural tourism has flourished. The per capita annual income of Shenshan Village has increased from 2,800 yuan in 2015 to 28,000 yuan in 2020, and many villagers have driven private cars.

In February 2017, Jinggangshan City officially announced that it would take the lead in poverty alleviation in the country, becoming the first impoverished county to alleviate poverty after the establishment of the poverty withdrawal mechanism in my country.

The asphalt road passes through the village, the white walls, black tiles and the dense shade of green trees set off each other, and the clear ponds and landscape pavilions are dotted with each other... In early summer, the reporter walked into Tantou Village, Zishan Town, Yudu County, and a series of unique pastoral pictures were slowly spreading out. .

In May 2019, Xi Jinping came here to inspect the poverty alleviation and rural revitalization and development of the old revolutionary base on the spot.

Sitting around in the living room, Xi Jinping, Sun Guanfa's family and local town and village cadres made a choreography.

The general secretary said: "I came to Jiangxi this time to visit the old folks in the Soviet district to see if the lives of the folks have improved, and whether the old districts can get rid of poverty as scheduled."

Tantou Village is the Red Army Village and was once a poor village.

With the victory of poverty alleviation and the seamless connection with rural revitalization, the village has changed.

A Tourism Development Co., Ltd. was established in the village, and the villagers worked together to develop projects such as "selenium-enriched canteen", homestays, and red research tourism. Everyone has a new identity: guide, cleaner, waiter, chef...

"Investment in dividends, income from homestays, and son's migrant work. Last year, my family's annual income reached 220,000 yuan. I didn't even think about it in the past!" Sitting on the bench in the living room, Sun Guanfa broke his fingers and told reporters to calculate the family's income and expenditure accounts. .

"We rely on XR technology to produce large LED screens for virtual shooting, and the products are used in many hit dramas." said Yan Yinghao, the person in charge of the company.

Xiuhu Smart Manufacturing is just a microcosm of the old revolutionary base embracing the new economy and cultivating new kinetic energy.

From the “one industry dominance” of tourism to the “three-wheel drive” of global tourism, new industries, and modern agriculture, Jinggangshan’s high-quality development path has become wider and wider, and its innovation-driven capabilities have continued to increase.

In 2019, the total industrial output value of Jinggangshan City reached 9.265 billion yuan, an increase of more than 50% over five years ago. Last year, five national high-tech enterprises were approved.

At the same time, the once remote mountain villages have developed unique boutique homestays. There are 15 agricultural enterprises in the city that have passed the organic certification, and 42 organic agricultural products have been certified.

With a population of more than one million in Yudu County, the county economy once lacked engine support and guidance. In the past, the labor-intensive clothing industry had low added value and agricultural development had no brand characteristics.

In recent years, Yudu County has reshaped the new advantages of the traditional clothing industry with intelligent manufacturing as the core.

At Yudu Winner Fashion (Ganzhou) Co., Ltd., customers can select fabric colors or styles online according to their needs. After placing an order, the data will be directly transmitted to the production line. Pieces of fabric will be automatically cut according to the customer’s personalized data, and pieces of clothing will pass through the intelligent scheduling system Transfer to the appropriate station.

The person in charge of the company told reporters that the application of intelligent technology can help companies reduce management costs by 70%.

Over the past few years, more than 3,000 textile and garment enterprises have gathered in Yudu County, and the industry's output value has reached more than 50 billion yuan, which has driven more than 80,000 migrant workers in the clothing industry to return to their hometowns to start businesses.

Traditional agriculture has gained fame with the help of selenium-rich brands.

In the early summer, when we walked into the 10,000-mu selenium-rich vegetable base in Zishan Town, Yudu County, vegetables such as loofah and peppers were flourishing. The villagers were picking them in the shed and preparing to load them to the market.

Ouyang Tianquan, director of the Economic and Work Office of the Agricultural and Rural Bureau of Yudu County, told reporters that the price of ordinary peppers is about 2 yuan per catty, and selenium-enriched peppers can be sold for 7 yuan per catty, and they are often sold out.

Yudu County Party Secretary Chen Yangshan said that Yudu County will focus on building the Yudu selenium brand in China, so that the people's life will be "seamless blooming steadily".