"Defending by offensive": how the large-scale NATO exercise Defender Europe 2021

As part of the exercises of the North Atlantic Alliance Defender Europe 2021, Immediate Response 21 maneuvers have started, which will take place in Bosnia and Herzegovina, Croatia and other countries. According to the Bosnian Ministry of Defense, the US military will take part in the exercise, as well as UH-60 Black Hawk helicopters and Bradley combat vehicles. According to experts, despite the Pentagon's statements about the "defensive" nature of Defender Europe 2021, their course and scale indicate the opposite. Most of the operations are "offensive", and they are organized near Russian borders, analysts emphasize. 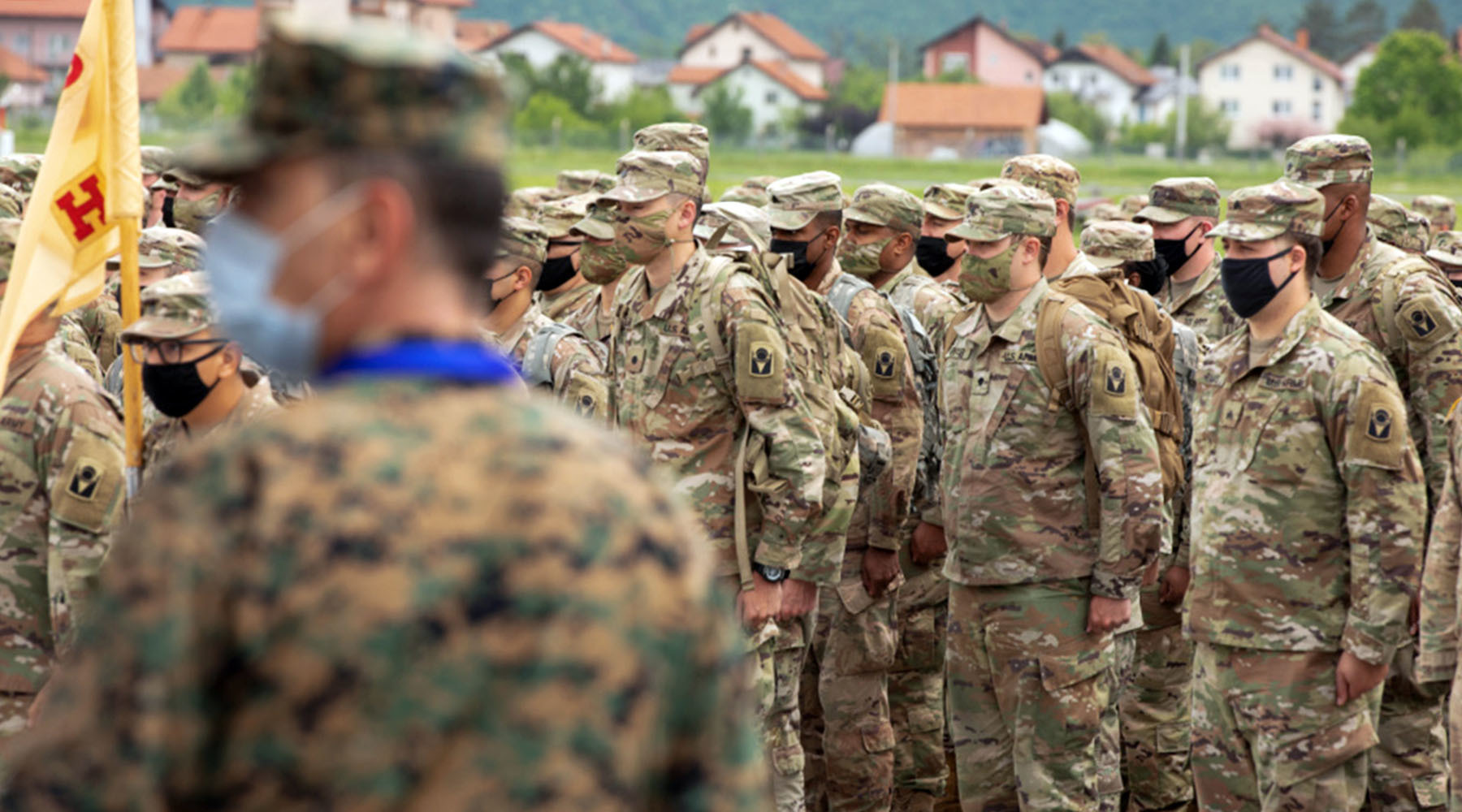 In Bosnia and Herzegovina, the Immediate Response 21 exercise begins, part of the large-scale Defender Europe 2021 maneuvers.

According to the country's Defense Ministry, about 500 Bosnian troops and about 700 American troops will take part in the training.

"Yesterday, US Army National Guard fighters, along with the 53rd Infantry Brigade Combat Team and the Florida National Guard, arrived in Bosnia and Herzegovina to support Immediate Response 21!" May 16 on Twitter.

The website of the Ground Forces also reported that as part of the maneuvers, “a commercial long-distance transport will arrive in Croatia carrying American military equipment and equipment from Romania, including Bradley combat vehicles.

“American fighters will use these funds in the framework of the Immediate Response 21 exercise - practicing the reception, concentration and subsequent deployment of troops associated with Defender Europe 2021. The culmination of the exercise is a joint international demonstration firing of military shells called Croatian Rampart 1991-2021 (Croatian shaft ) - to commemorate the 30th anniversary of the creation of the Croatian Armed Forces, celebrated at the end of May, ”reads a press release on the website of the US Ground Forces in Europe and Africa.

The Pentagon said that during the Immediate Response 21 exercise, more than five thousand troops from eight states "will conduct live firing" in 12 different countries.

As clarified by the news agency Sputnik, these states, in addition to Bosnia and Herzegovina and Croatia, include, in particular, Montenegro, Albania, the United States, Great Britain, Canada, Greece, North Macedonia and Slovenia.

It is worth noting that as part of the Defender Europe 2021 exercise, Astral Knight (AK21, "Star Knight") integrated anti-aircraft and anti-missile defense maneuvers are already underway, led by the United States.

The training started on May 13 and will last until May 22.

According to the press service of the US Army in Europe and Africa, the purpose of these exercises is "to strengthen relations with allies and partners through the formation of a joint international air defense potential."

“As part of AK21, the Patriot air defense system battery of the 5th Division of the 7th Anti-Aircraft Artillery Regiment of the 10th Air Defense and Missile Defense Command of the US Ground Forces will train side by side with the Croatian allies, practicing the air defense of the air and sea ports and other objects set by the exercises,” - stated in the corresponding press release.

The NATO website states that Astral Knight is being held not only in Croatia, but also in Greece, Italy, Slovenia.

It is also noted that Astral Knight will be held over the Adriatic Sea and in the areas adjacent to it.

will be integrated into a single picture of the operational situation

," the press service of the alliance clarified.

In May, the Swift Response ("Quick Response") exercises were already held in Estonia, Bulgaria and Romania, also related to the Defender Europe 2021 maneuvers. As reported by the integration unit of NATO forces in Estonia, in this republic, along with the Estonian military, more 2 thousand military personnel from the United States and Great Britain.

Recall that Defender Europe is a large-scale training that is organized annually under the leadership of the US Army.

This year, the maneuvers are taking place simultaneously in 16 European countries with the participation of 28 thousand soldiers.

Defender Europe 2021 began in March and will run through June.

The Pentagon said that Defender Europe 2021 maneuvers are "defensive" in nature.

Despite this, Moscow stressed that they continue to "closely monitor the situation, the progress of the transfer and deployment of NATO forces in Europe" within the framework of Defender Europe 2021, said Russian Defense Minister Sergei Shoigu, noting that the strengthening of the military presence of the United States and the alliance in Europe the region leads to an increase in military danger.

According to him, “the military infrastructure is being modernized, the intensity of operational and combat training is growing, and the American concept of“ 4 to 30 ”is being implemented.

Recall that the program "4 to 30", which Shoigu mentioned, involves the creation in NATO of 30 motorized infantry battalions, 30 air squadrons and the presence of 30 warships, which are ready for use within 30 days.

"Not distinguished by cohesion"

According to experts, despite the Pentagon's statements about the "defensive" nature of the Defender Europe 2021 exercises, their course and scale indicate the opposite.

According to military expert Yuri Knutov, the equipment used in these maneuvers, including UH-60 Black Hawk helicopters, "is used, as a rule, in offensive operations."

“In particular, Black Hawk is needed for landing, delivery of combat vehicles, and infantry transfer.

They are used to practice and conduct an offensive.

In general, most of Defender Europe 2021 operations are offensive.

First, the troops are deployed, and then they go over to the counteroffensive, "the expert said in a conversation with RT.

He also drew attention to the use of offensive weapons systems during maneuvers, as well as the landing of amphibious forces.

“Troopers are always viewed as specific units that operate behind enemy lines.

And NATO has repeatedly stated who this enemy is.

It turns out that the alliance decided to defend itself against the Russian Federation, but for some reason it was through an offensive, ”the analyst said in an interview with RT.

Leonkov also noted that in this context, the course of the maneuvers suggests that the main goal of Defender Europe 2021 is "to work out the strategy of interaction between different branches of the alliance's troops."

“The task is to bring them to a common denominator, so that in the event of a conflict, they act as a whole.

For NATO, this is relevant, since the southern flank of the bloc, which includes the former countries of the socialist camp, is not distinguished by cohesion.

In addition, there are contradictions between the northern and southern members of the alliance, ”Leonkov said.

Knutov also noted that among other features of Defender Europe 2021 - maneuvers on the southern flank of NATO, interaction with the North African command of the bloc, as well as "the rate on the countries of the Balkan Peninsula."

"The alliance is drawing these states into its aggressive policy, making them accomplices in the struggle against the imaginary threats that the bloc has invented for itself, including the notorious" danger "from Russia," the analyst said.

As Knutov explained, the NATO leadership is "beneficial" that Bosnia and Herzegovina, Bulgaria, Romania, as well as other Balkan countries provide their infrastructure for the exercises, "although they do not have serious military potential."

“From the point of view of logistics, it is convenient for the alliance to use the airfields, ports, railways and highways of these small states for the transfer of troops, in particular the United States, to Europe,” the expert stated.

As for Bosnia and Herzegovina, although the country is not a member of NATO, but only participates in the program of the Partnership for Peace bloc and “strives to join the alliance with all its might,” the state is involved in the most important trainings, in particular, in order to “test its potential”, believes Knutov.

“Despite the fact that Bosnia and Herzegovina is a small country that does not play any role for NATO, during the maneuvers in the bloc they want to look at the possibilities of this state to meet the needs of the alliance.

Based on this check, a decision will be made on the country's entry into NATO, ”he said.

Summarizing the above, Knutov also drew attention to the scale of the Defender Europe 2021 exercise.

“These are the largest alliance maneuvers in Europe over the past 25 years.

Thousands of American troops will be airlifted across the ocean by ships and planes from the United States, after which the echelon will follow directly to the border with Russia.

This cannot but cause concern in Moscow.

However, the Russian Federation is ready for possible provocations, ”the expert concluded.