Chinanews.com: In response to the Palestine-Israel conflict, China shows its responsibility as a great power

China News Service, May 17 (Wen Tianxia) Recently, the Palestine-Israel conflict is experiencing a serious escalation that has not been seen in many years. Since China assumed the rotating presidency of the Security Council, it has taken a highly responsible attitude to respond to the current tensions between Palestine and Israel. The most important thing is to promote the Security Council to de 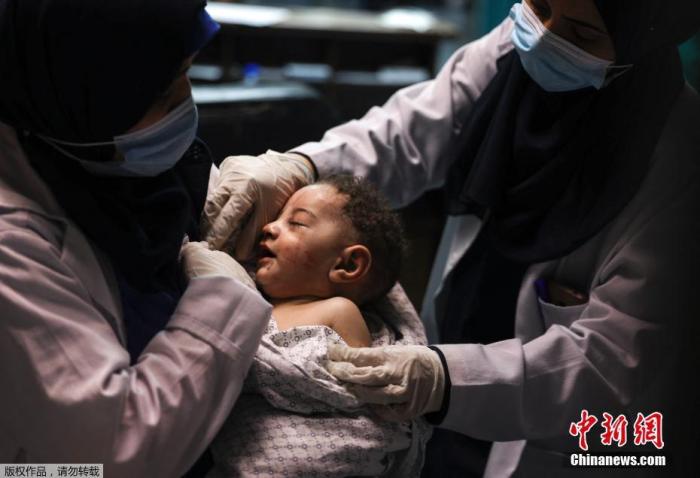 China News Service, May 17 (Wen Tianxia) Recently, the Palestine-Israel conflict is experiencing a serious escalation that has not been seen in many years. Since China assumed the rotating presidency of the Security Council, it has taken a highly responsible attitude to respond to the current tensions between Palestine and Israel. The most important thing is to promote the Security Council to deliberate on relevant issues many times, and call on Palestine and Israel to stop violent conflicts and restart political dialogue.

China’s actions not only represent the mainstream voice of the international community, actively mediate, mediate and persuade international conflicts, but also demonstrate that China has not lived up to its name as a “responsible power” and promoted in terms of human life, human rights, and humanitarianism. The concept of people-oriented, fairness and justice.

On the 16th, Chinese State Councilor and Foreign Minister Wang Yi presided over an emergency public meeting of the UN Security Council on the Palestinian-Israeli situation and made a speech, calling for an immediate ceasefire and violent actions to maintain fairness and justice.

The meeting was held by video. Representatives from Palestine, Russia, Israel, the United States, Mexico, Kenya, and the United Kingdom attended the meeting. UN Secretary-General Guterres also gave a briefing.

The al-Shati refugee camp in Gaza was attacked on May 15 local time. A 5-month-old baby survived and all 7 other family members were killed.

The picture shows the baby receiving treatment in the hospital.

Since the continued exchange of fire between Palestine and Israel on May 10, the conflict has killed 197 Palestinians, including 58 children and 34 women.

In fact, due to Israeli actions and restrictions, the Palestinians have continued to suffer humanitarian suffering for many years.

The current artillery fire has caused devastating blows to innocent civilians on both sides.

Life is a matter of life.

China calls on the situation to cool down as soon as possible, calls on both sides to immediately cease military and hostilities, and strongly condemns acts of violence against civilians.

Indeed, no matter which country or region it is, innocent civilians should not be allowed to fall victim to war.

Putting people's life safety in the first place and reducing bloodshed is the protection and importance of the right to life and basic human rights.

In addition, China also urges Israel to earnestly fulfill its international treaty obligations, lift the blockade and siege of Gaza as soon as possible, guarantee the safety and rights of civilians in the Occupied Palestinian Territory, and provide access for humanitarian assistance.

For many years, China has provided humanitarian assistance to Palestine.

In 2020, China will donate US$1 million to the United Nations Relief and Works Agency for Palestine Refugees in the Near East.

Since the outbreak of the new crown epidemic in Palestine, China has taken the lead in extending a helping hand, providing a large amount of medical assistance to Palestine, sharing experience in epidemic prevention and control and diagnosis and treatment with Palestine, and sending a team of medical experts to the front line to help Palestine fight the epidemic.

He pointed out that China has firmly fulfilled its commitment to make vaccines a global public product.

-China is a country that advocates peace and advocates "sit down and talk" instead of "rush out and fight."

The grievances between Palestine and Israel have lasted for a hundred years, and the pain caused by the violent conflict has caused tragedies for generations.

What should Palestine refugees do?

Should the Jewish settlements in the West Bank stay or be demolished?

What is the status of Jerusalem, and should both parties "share" Jerusalem?

Focusing on a series of issues, the Palestinian-Israeli peace talks have been intermittent for 25 years, but many issues are still difficult to solve.

On May 11, local time, during the Palestine-Israel conflict, bursts of smoke from the explosion emerged over the buildings in the Gaza area.

Wang Yi reiterated at the meeting that China invites peaceful persons from both Palestine and Israel to come to China for dialogue, and also welcomes Palestinian and Israeli negotiators to hold direct talks in China.

In order to facilitate the dialogue between Palestine and Israel, China is willing to do the "landlord friendship" to provide channels and platforms for dialogue between the two sides. This is a kind of great power and a willingness to assume responsibility.

In fact, in addition to promptly speaking on important occasions such as the United Nations, promoting the concepts of peaceful coexistence and seeking common ground while reserving differences, China has also undertaken important tasks such as peacekeeping, rescue, and escort overseas, and has been making concrete contributions to the peaceful development of the international community. Contribution.

——The "two-state solution" is the fundamental way out

In addition, Wang Yi pointed out in his speech at the meeting that the "two-state solution" is the fundamental way out for the settlement of the Palestinian-Israeli conflict.

The "two-state solution" refers to the establishment of an independent Palestinian state based on the borders before the third Middle East War in 1967, with East Jerusalem as its capital, and peaceful coexistence with Israel.

On May 15, local time, during the Palestinian-Israeli conflict, local people in the Gaza area leaned out of the damaged building and looked around.

Since the mid-1970s, the "two-state solution" has received increasing support in the UN General Assembly.

Around the same period, the Palestinians’ support for this plan gradually increased.

In order to fundamentally solve the Palestinian-Israeli issue, the international community has given a path of guidance.

However, contradictions and conflicts are usually accumulated over time, complicated and difficult to solve, and cannot be solved overnight.

Today, the war is still going on. As Foreign Minister Wang Yi pointed out, "the Middle East is unstable and the world is uneasy."

Remaining restraint and returning to dialogue and negotiation is the only way out; the international community should also unite its pace, speak out and act proactively, and push the Middle East peace process back on the right track.