Middle East: new raids in Gaza, rockets on Israel. Calls for a ceasefire

Israel, 60 rockets fired in the night. Yesterday the meeting of the UN Security Council ended without a position shared by the member countries. Joint communiqué from China, Norway and Tunisia, calling for an "immediate end to hostilities". Phone call between Erdogan and Pope Francis. The Pontiff also received the Iranian foreign minister Zarif in audience 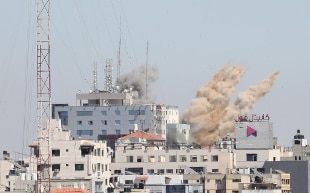 May 17, 2021 After a bloody Sunday, a day that recorded the highest Palestinian death toll since the start of the conflict with Israel - at least 42, according to Gaza sources, including 16 women and 10 children - the Israeli Defense Forces have their bombings against targets of the Islamist movement Hamas in the enclave resumed during the night.

Gaza City has been hit repeatedly from North to South, following Prime Minister Benjmanin Netanyahu's announcement that the military operation will continue.

The city's electricity grid was severely damaged and the homes of nine Hamas commanders across the Strip were hit.

"The attacked houses were used as terrorist infrastructures and in some even weapons depots were found," the army said. In the night, the Israeli Defense Forces also hit Hamas' underground tunnel system in the north of the country. Strip. According to the Times of Israel,

. The network hit during the night is the one called the "C line". "As part of the attack, some 35 terrorist targets were targeted over a period of approximately 20 minutes," a military statement said. According to the Israeli Armed Forces, 54 fighter planes participated in the attack and dropped about 110 precision ammunition, destroying 15 kilometers of tunnels. "This attack was part of a large IDF operation to significantly damage the underground system of terrorist organizations in Gaza," the army reported.

Israel, 60 rockets fired from Gaza in the night

About 60 rockets were fired at Israel from the Gaza Strip from 7pm last night to 7am this morning. This was reported by the Israeli armed forces, according to which 10 of these rockets fell on the territory of the strip. Inhabitants of Israeli towns near Gaza returned to shelters this morning while intense bombing resumed from Gaza. Military sources report that during the night Hamas and Islamic Jihad also launched dozens of rockets towards Beer Sheba, the main city of the Negev. No casualties were reported.

Warning sirens are ringing across southern Israel for the

resumption of rocket launches from the Strip

. In particular - according to the army - in the Israeli communities around Gaza, but especially in Ashkelon, Ashdod and also Beer Sheva at the beginning of the Negev. Eight Israelis were injured by rocket shrapnel, said the emergency medical and civil protection service in Israel, Magen David Adom.

The Israeli military reports that it has hit over "1,180 targets related to Palestinian terrorist groups" since the conflict with Hamas began last week. The army also explains that, again since last Monday, about 3,150 rockets have been fired in the direction of Israel, 460 of which have not crossed the border and have fallen in the Gaza Strip. Finally, the military pointed out that its Iron Dome missile defense system intercepts 90 percent of the rockets fired at Israel.

According to the local press, an

Islamic Jihad commander was killed in a raid

against his home in Beit Lahiya, in the north of the Gaza Strip. The victim would be Hussam Abu Harbeed, a Palestinian who led the group's operations in the western part of the enclave. The Israeli army then confirmed the killing of Abu Harbid. The operation took place in concert with the Shin Bet, the Internal Security Service. "Abu Harbid - explained the military spokesman - was commander of the Jihad for over 15 years and responsible for numerous terrorist attacks with anti-tank missiles against civilians Israelis, including that on the first day of the operation in which a civilian was killed ". "In addition - he added - he has consistently directed the firing of rockets against Israel as well as attacks on Israeli soldiers"

Israeli firefighters reported having put out 97 fires in the past 24 hours, 32 of which were arson. The Times of Israel reports it. These are mostly bush fires set near Israeli roads, military bases and settlements. In other cases, tires were set on fire or fires broke out following the launch of Molotov cocktails.

In one of the attacks carried out by Israel in the Strip, the doctor Ayman Abul Al-Ouf died, along with his wife and 5 children. The Hamas health ministry reported that their bodies were taken to Shifa hospital where the professor was a leading figure, also known in the international medical community. The attack - where dozens of Palestinians were injured - took place last Saturday night in Al Wahda street in Gaza City, 200 meters from the hospital. In memory of al-Ouf, the structure named one of its rooms.

The Arab political leadership of Israel has called a general strike for tomorrow. The motivation - it was explained - is solidarity with the al Aqsa Mosque in Jerusalem and the inhabitants of the Arab quarter of Sheikh Jarrah in the eastern part of the city.

US Secretary of State Antony Blinken asked Israel to clarify the "justification" for the attack on the Gaza building that is home to some media, including AP and Al Jazeera. Speaking from Copenhagen, where he is visiting, Blinken then called on Israelis and Palestinians to "protect civilians, especially children". reiterating that Israel, "as a democracy, has a particular duty" to do so. The secretary of state said the US "continues to conduct intense diplomatic activity to end the current cycle of violence" and that it is ready to "support the parties if they reach a ceasefire".

France: committed to a ceasefire and lasting stability

France today called for "an easing" of tensions and "moderation" in the Israeli-Palestinian conflict, "including the aftershocks that Israel could suffer in the face of attacks on its soil". Interviewed by RTL, the government spokesman, Gabriel Attal, assured that France is engaged in a "diplomatic offensive initiative" to find a solution to this conflict. Attal recalled that the executive initially intends to obtain "a ceasefire. as quickly as possible ", and then" to find a lasting stabilization solution for the region ". "These are our two goals," he explained, indicating that France would "work with Egyptians, Jordanians and Germans".

Turkish President Recep Tayyip Erdogan had a telephone conversation with Pope Francis on the conflict between Gaza and Israel. This was reported by a statement from the presidency of the Turkish Republic. The note reiterates the clear condemnation of Turkey, which supports the position of the Palestinians and the process of forming two states. "President Erdogan stressed the need for not only the Islamic world, but also the Vatican to intervene to put an end to attacks aimed at affecting the conscience of all humanity. Turkey supports the peace process, remains alongside the Palestinians and will continue to defend the status of Jerusalem ", reads the statement.

The Pope receives the Iranian foreign minister Zarif in audience

Pope Fracesco received HE Mr. Mohammad Javad Zarif, Minister of Foreign Affairs of the Islamic Republic of Iran in an audience this morning. This was announced by the Vatican Press Office.

"We are concerned about the clashes and violence in the Middle East". This is what Foreign Minister Luigi Di Maio reiterated this morning during the bilateral meeting with his Iranian counterpart Javad Zarif on the occasion of his visit to Italy. Interview scheduled for several weeks, included in the series of European meetings planned for some time by the Iranian minister. Di Maio, according to what is learned, told Zarif that "the launches of rockets must be stopped, they are unacceptable: it is necessary to take immediate de-escalation measures and show responsibility". "The conflict between Palestine and Israel is causing the death of too many innocent people and everyone must work to get the negotiating table between the parties to resume," the minister stressed.

Israeli Ambassador to Zarif: "We are under the rockets sent by you"

"Mr. Iranian Foreign Minister Zarif, while you are visiting the wonderful Rome, I am in Israel with my little daughters, under the fire of the terrorist attack that Hamas unleashed on Israel, with your funding, your encouragement and your leadership. " Thus the Israeli ambassador to Italy, Dror Eydar, in a letter sent to Zarif on an official visit to Italy.

Egypt calls for a ceasefire

"Egypt is doing everything to achieve a ceasefire between Israelis and Palestinians, and hope still exists." This was stated by Egyptian President Abdel Fattah al-Sisi, quoted by the N12 broadcaster. In recent days, Egyptian mediators traveled to the Gaza Strip to meet with Hamas leaders and to Israel to try to broker a one-year truce between the parties. The attempt was immediately resolved with a stalemate.

Yesterday the meeting of the UN Security Council

Yesterday the umpteenth meeting of the UN Security Council ended without a position shared by the 15 member countries for the opposition of the United States. In a joint statement by China, Norway and Tunisia, a strong condemnation of the Hamas attacks was expressed and an invitation was made to Israel, whose right to defend itself is recognized, to measure its reactions. "We express strong concern about the crisis in the Middle East, we call for an immediate end to hostilities and the immediate sending of humanitarian aid to Gaza, especially for children who must never be a target," Norway's ambassador told the UN, Mona Juul. "We are concerned about the violence in East Jerusalem in particular near the places of worship that we ask to respect",Mona Juul continued, calling on Israelis and Palestinians to "resume dialogue quickly". Even in Gaza, where the bombing of Israel was concentrated, "the immediate dispatch of humanitarian aid, food and basic necessities" is required.

Unicef: 57 children killed in one week

"As the latest major escalation of the Israeli-Palestinian conflict reaches a week, and after the Security Council met yesterday to discuss the latest developments on the ground, I renew my call for an immediate end to the violence": with a statement UNICEF director Henrietta Fore confirms that "in the past week at least 55 children in the state of Palestine and 2 children in Israel have been killed." "Fear and destruction are increasing on both sides. In Gaza, schools were destroyed, homes and offices were razed and entire families were displaced. In Israel, schools, homes and buildings were damaged - says Fore - violence, killing and hatred must stop.International human rights and humanitarian law must be respected. Civilians and civilian infrastructure must be protected ". So, concludes the director of Unicef," the only solution is a diplomatic solution - for the good of all children and their future ".