Tibet's 199 inspection teams strictly control the replacement of the term and make unannounced visits to more than 300,000 people

More than 300,000 person-times of individual interviews, random visits, and unannounced telephone interviews   Tibet's 199 inspection teams strictly control the re-election The Ethics Supervision Team of the Changdu Commission for Discipline Inspection of the Tibet Autonomous Region visited Tongxia Village, Chengguan Town, the city to learn about the implementation of the disciplinary change a 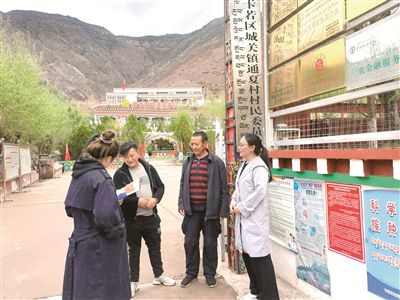 The Ethics Supervision Team of the Changdu Commission for Discipline Inspection of the Tibet Autonomous Region visited Tongxia Village, Chengguan Town, the city to learn about the implementation of the disciplinary change and collect clues on related issues.

"The measures of'one village, one policy' in some villages are not detailed enough, and the basic conditions of individual villages, the operation of the team, the status quo of party members, personnel reserves, the demands of the masses, and the hidden dangers of the'six clear' have not been investigated..." Early May, Lhasa, Tibet Autonomous Region The Municipal Commission for Discipline Inspection organized various county (district) Commission for Discipline Inspection and Supervision to set up special supervision teams to go to the villages of Naga, Nanba, and Joining, Gurong Town, Duilongdeqing District, to conduct on-site inspections on voter registration and candidate nomination, and Report problems to the town party committee in a timely manner, urge the town party committee to earnestly perform its main responsibilities, and the party committee secretary to fulfill the responsibilities of the first responsible person, take rectifications one by one, learn from one another and deepen rectifications to ensure the smooth progress of the change of office.

Since the beginning of this year, the district discipline inspection and supervision organs have strictly followed the requirements of the "Notice on Strictly Changing Discipline and Strengthening the Supervision of the Change of Ethics", conscientiously fulfilling the special supervision responsibility, focusing on the key links, key steps, important positions and other follow-up supervision, precise supervision, and the whole process of the general election. Supervise, discover, investigate and deal with violations of discipline and law, resolutely maintain the authority of the change of discipline, and create a clean and upright environment for the change.

"The change of term is a major event in political life. You cannot wait until problems occur before you can supervise them. We must do our work ahead." In early February, the Commission for Discipline Inspection of the Autonomous Region took the opportunity of convening the sixth plenary meeting of the Ninth Disciplinary Commission of the Autonomous Region to organize the secretaries of the Municipal Commission for Discipline Inspection. Attend the meeting of the Standing Committee, request the secretaries of the Disciplinary Committee to report to the main leaders of the prefectural and municipal committees in a timely manner, strengthen communication with the organization department of the prefectural and municipal committees, understand and grasp the situation of candidates in advance, promptly initiate problem solving, and sort out risk prevention and control points.

Discipline inspection and supervision agencies in the whole district insist on moving forward, carefully review and check the opinions on personnel arrangements put forward by the party committee at the same level, and accurately issue clean government opinions, which not only prevents "ill nomination" and "ill promotion", but also ensures accurate research and judgment without affecting cadres Normal selection and appointment.

"We concentrated our backbone forces and screened the 468 village cadres and party members who requested clean government review by the organization department one by one, and found that 2 party members did not meet the requirements." The relevant person in charge of the Commission for Discipline Inspection of Shenzha County, Nagqu City introduced.

Since the election, the district has reviewed and reviewed 32,957 nominees for the election, found and corrected 374 cadres with incomplete files and unclear ages, and promptly disqualified 43 candidates with problems.

"Only by strict control at all levels, can the elected cadres be stable, the people can be convinced, and the follow-up work can be effectively promoted." The Tibet Autonomous Region strictly implements the discipline inspection and supervision organs to listen to the opinions and reflect the specific and traceable letters and visits of the problem clues. Reporting requirements must be investigated, iron disciplines are run through the whole process of the change of office, focusing on key links such as voter registration, candidate nomination, and voting, focusing on canvassing and bribing elections, interfering with the election, saying hello, and failing to implement responsibilities, such as violations of discipline and law, with an iron fist. Discipline, serious accountability.

“We have organized a total of 199 general supervision teams to conduct individual interviews, random visits, and unannounced telephone interviews with 302,600 cadres and the masses, consulted 335 documentary materials throughout the selection and appointment of cadres, and supervised and rectified 97 issues.” According to Liu Fengchun, director of the Political Work Supervision Office, up to now, the Commission for Discipline Inspection of the Autonomous Region has received 3 complaints and reports reflecting the renewal of the "two committees" of towns (sub-districts) and villages (communities), of which 2 were transferred to the prefectural and municipal commissions for discipline inspection. , 1 case that did not belong to the disciplinary inspection and supervision duties has been transferred to the Organization Department of the Party Committee of the Autonomous Region for processing.

The 7 prefectural and municipal commissions for discipline inspection received a total of 78 clues involving the replacement of the "two committees" of towns (sub-districts) and villages (communities), 38 cases have been completed, and 18 people have been organized and handled.

The overturning of the previous vehicle, the lesson of the following.

The discipline inspection and supervision organs of the whole district insist on education first, warning first, and prevention first, and urge all cities and cities to carry out in-depth education on clean government warnings, and comprehensively build a line of defense for disciplinary changes.

The Xigaze Municipal Commission for Discipline Inspection and Supervision organized party members and cadres at all levels to watch relevant warning education films, supervised the signing of the "Six Must Sign" Commitment Letter, and issued the "Selected Compilation of Strictly Renewed Disciplinary Documents."

Since the change of term, the district has carried out 4889 special learning sessions, held 4717 sessions of general supervision and publicity training, issued 103,600 copies of the “Change of Discipline Awareness Card”, and conducted 57,900 heart-to-heart talks.

In addition, the Commission for Discipline Inspection and Supervision of the Autonomous Region also selected two leading cadres to participate in the supervision and inspection of the changes in various regions, and pay close attention to the handling of letters and visits, the handling of problem clues, and the response to party style and clean government opinions and other important points to strengthen the investigation of clean governance risks to ensure compliance with regulations and laws. Carry out supervision. (Our reporter Li Yongfeng, Deng Qing, Marshallan)