Israeli army: "Hamas is paying the price for its terror". Palestinian media: children also hit in the attack. Over 200,000 people in Gaza without electricity. Egypt calls for a ceasefire, US President John Biden's envoy in Tel Aviv. Tomorrow the UN Security Council 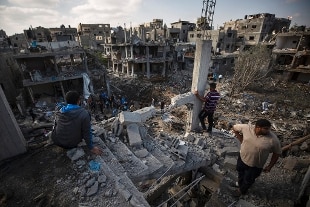 May 15, 2021 Tension is still high in Gaza, where, after the Israeli army's turnaround following the announcement of a ground operation, air strikes and rocket firing continued tonight. According to the authorities, the victims in the Strip are 126, including 31 children.

The Israeli army (IDF) gives a tweet the balance of the actions of this night. "In response to the more than 2,000 rockets fired from Gaza into Israel, tonight we hit: Military Intelligence Headquarters, Rocket Launch Site, Surface-to-Surface Rocket Headquarters and two terrorist teams. Hamas is paying the price. of his terror ".

Two Palestinian women and five children were killed in the bombing of a building in the western part of Gaza City: the Israeli media reports. Another 15 people were injured. This is the highest number of casualties in a single Israeli bombing since the start of the military campaign last Monday.

Over 200,000 people in Gaza without electricity

More than 200,000 people in the Gaza Strip were left without electricity due to rockets that were fired by Hamas militants against Israel but failed to reach the Jewish state, crashing inside the Gaza Strip. today the Israeli defense forces. "Not all rockets that Hamas fires at Israel reach their target. Hundreds of Hamas rockets have fallen in the Gaza Strip, some have crashed into power lines. More than 200,000 people in Gaza are without electricity due to Hamas rocket fire, "explained the Israeli Defense Forces, quoted by the Times of Israel.

Palestinian media in the Gaza Strip reported that seven people, including several children, were killed in an Israeli airstrike that hit a house in al-Shati refugee camp, inside the Hamas-controlled enclave. According to the first reports, reported by the Times of Israel, several people would be under the rubble and the children involved would belong to the same family.

A barrage of rockets was launched in the night by Hamas towards the Israeli towns of Ashkelon, Ashdod, Beersheba and Sderot. The Times of Israel reported it explaining that one of the rockets launched from the Gaza Strip in the middle of the night hit an apartment building in Ashdod, while another landed in the port of Ashdod, hitting a fuel tank and causing a massive explosion. There are currently no victims. Some of the rockets were intercepted by the Iron Dome missile defense system while others landed in uninhabited areas.

Egypt calls for a ceasefire, diplomacy in the field

Egypt calls for a ceasefire, even partial, to evacuate the wounded. Hady Amr arrived in Tel Aviv, the envoy of US President John Biden, to whom Abu Mazen asked to "stop the Israeli aggression". Tomorrow the UN Security Council. In Europe it is alert to possible anti-Semitic actions. A pro-Palestinian demonstration scheduled for today banned in Paris. Another, last night in Copenhagen, escalated into violence.

Morocco sends 40 tons of aid to the Palestinians

Moroccan King Mohammed VI has ordered 40 tons of humanitarian aid to be sent to Palestinians in the West Bank and Gaza Strip, following recent violence between Islamic movements in the Palestinian enclave and the Israeli army. Aid includes food, medicines and blankets and will be transported by military aircraft, the Moroccan foreign ministry said in a statement. Morocco also denounced "the violent acts perpetrated in the occupied Palestinian territories" and reiterated support for a two-state solution.