"Nihao Mars": China succeeds in landing a robot on the red planet - France 24

"Nihao Mars": China succeeds in landing a robot on the red planet Beijing (AFP) A faultless: China succeeded on Saturday in landing a small remote-controlled robot on the surface of Mars, a first for the Asian country during a particularly delicate mission. "The Tianwen-1 lander successfully landed in the predefined area" on Mars with the robot "Zhurong" on board, state television CCTV reported, which broadcast a special edition titled "Nihao Huoxing" (Hello M 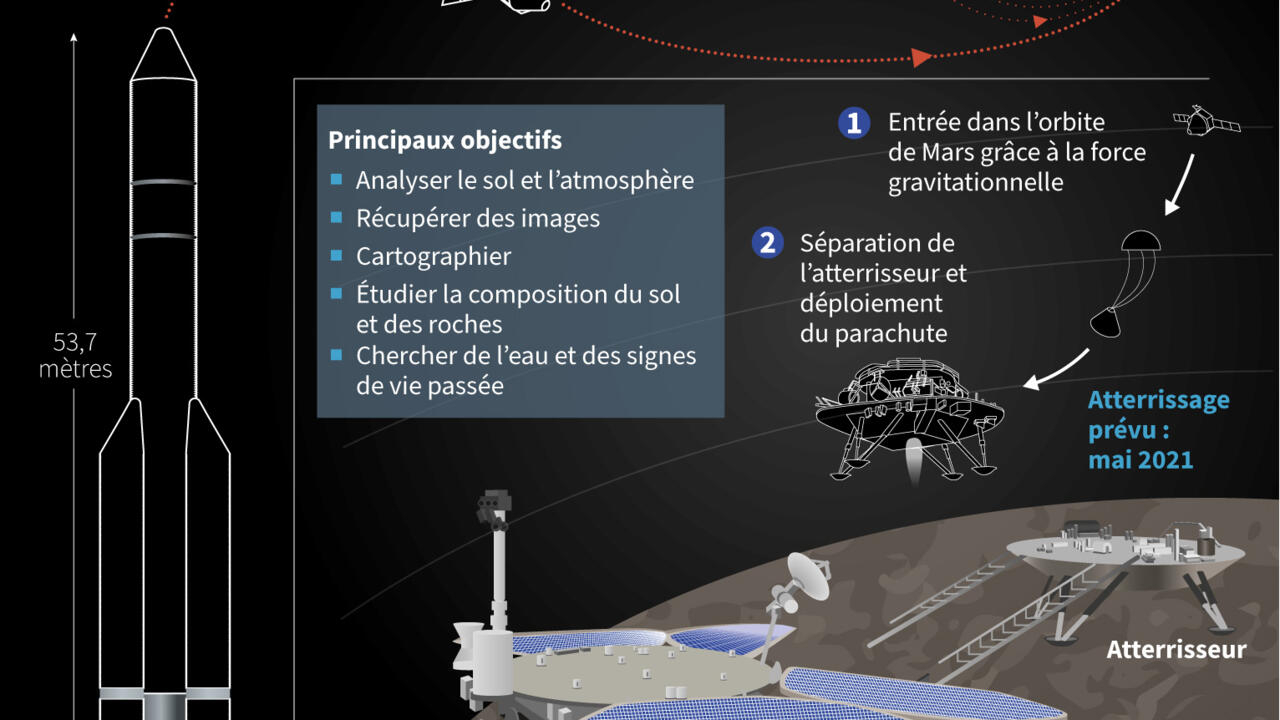 A faultless: China succeeded on Saturday in landing a small remote-controlled robot on the surface of Mars, a first for the Asian country during a particularly delicate mission.

"The Tianwen-1 lander successfully landed in the predefined area" on Mars with the robot "Zhurong" on board, state television CCTV reported, which broadcast a special edition titled "Nihao Huoxing" (Hello Mars ), and specified that a "signal" had been received on Earth.

The landing took place in an area of ​​the red planet called "Utopia Planitia", a vast plain located in the northern hemisphere of Mars.

For this first attempt alone, the ambitious Chinese wanted to do everything the Americans have achieved in several Martian missions since the 1960s.

China already has experience in this area: it rolled two small robots on the Moon, the "Jade Rabbits" 1 and 2 - deposited in 2013 and 2019 respectively.

The mission to Mars must also look for possible signs of past life.

"Zhurong" is equipped with solar panels for its power supply and is supposed to be operational for three months.

The robot is also equipped with cameras, radar and lasers which will allow it in particular to study its environment and analyze the composition of Martian rocks.

He arrived on the Red Planet a few months after Perseverance, the rover from NASA, the US space agency, which landed on Mars on February 18 with the mission of looking for proof of past life.

China is investing billions of euros in its space program, in order to catch up with Europe, Russia and the United States.

She sent her first astronaut to space in 2003.

China is also launching satellites for itself or on behalf of other countries.

Last year, samples of the Moon were brought back to Earth.

The Asian giant also plans to assemble a large space station by 2022. And he hopes to send men to the Moon within ten years.

The first of three elements of its space station was launched in late April.

To finalize the construction, China should launch a dozen missions, some of which are manned.

No precise timetable is yet known.

The "Tianwen-1" mission sent its first image of Mars in February: a black and white photo showing landforms like the Schiaparelli crater and the Valles Marineris canyon system.

Mars has proven to be an elusive goal, with most missions since 1960, sent by Russia, Europe, Japan, and India, failing.