Israel launches a night offensive against Gaza: the Strip under siege, but the invasion does not trigger

Israeli air and ground forces hit with massive bombings: 150 Hamas targets hit. The Army: no soldiers have crossed the border. Hamas responds with 50 rockets on coastal cities, most of them intercepted by the 'Iron dome' missile shield. Nearly 400 arrests for violence between Israelis and Arabs. So far 115 Palestinians and 7 Israelis have died 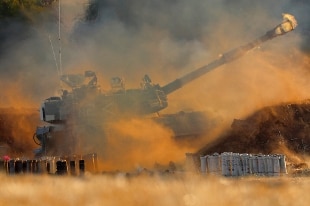 the largest operation against Gaza

since the start of the new military escalation, Israel carried out 50 'rounds' of ground and air bombardments in 40 minutes. This was reported by the army - as reported by the Agi - explaining that 160 aircraft, artillery and infantry were used in the attacks. Palestinian militias launched another 50 rockets towards Israel at dawn.

The Israeli army has confirmed that its

troops have not entered the Strip

after reports indicating the start of a ground offensive. "There was a lack of internal communication," said military spokesman Jonathan Conricus, who took responsibility.

of the Israeli bombing of the Gaza Strip, according to the budget of the Ministry of Health, quoted by the Israeli newspaper Haaretz. The wounded are 600.

The war between Israel and Hamas

with the offensive launched in the night by the air and land forces of the state against the Palestinian enclave. Not an invasion, as the army pointed out after "a communication error" regarding the entry of troops into the Gaza Strip, but intense bombardments of artillery and fighters to which the Islamic movement responded with the launch of over 50 rockets to the coastal cities of Ashdod and Ashkelon and near Tel Aviv's Ben Gurion Airport.

"I said that we would make Hamas pay a very high price, we do it and we will continue to do so with great intensity", assured the Israeli Prime Minister,

, "the last word has not been said and this operation will continue throughout the year. necessary time". To aggravate the picture there was also the launch of rockets from Lebanon directed towards Israel but ended up in the sea.

Meanwhile, diplomacy is struggling to make its voice heard. A meeting of

has been called for Sunday afternoon

in videoconference that should have been held on Friday, as requested by Tunisia, Norway and China. It was the United States that opposed this date asking for a postponement to next week "to allow time for diplomacy".

Washington appears in a position of embarrassment

- the Agi always writes -, caught between support for the Israeli ally and the need to maintain a balanced position to avoid isolation. The US Secretary of State, Antony Blinken, expressed " deep concern for the violence on the streets of Israel ". "We believe that Israelis and Palestinians have an equal right to freedom, security, dignity and prosperity," added the head of US diplomacy.

The United States has invited its citizens to

reconsider any trips to Israel

and the Palestinian Territories in light of the escalation of violence and fighting in the region. The State Department warns of travel from level two to level three, which provides precisely to "reconsider" travel. "Protests and violence can continue, some without warning", reads the 'warning'.

The toll of the clashes

in several cities of Israel

, against the backdrop of the military escalation with Hamas that began on Monday. The violence continues in many cities with a strong Arab presence such as Lod, Acre and Haifa.

In Musmus, near Haifa, police arrested 12 residents for stone throwing and damage. Two people armed with knives were arrested in Tel Aviv and another 13 arrests were made in Beersheba. In Bat Yam, near Tel Aviv, a video was released of the attack by Israeli extremists on an Arab who remains unconscious on the ground. His condition is serious but stable, Tel Aviv's Ichilov hospital reported.