The conflict between Palestinians and Israelis in Jerusalem continues: on Monday there were serious riots on the Temple Mount. Palestinian militants fired at least three rockets from the Gaza Strip. The US expresses concern about the situation. 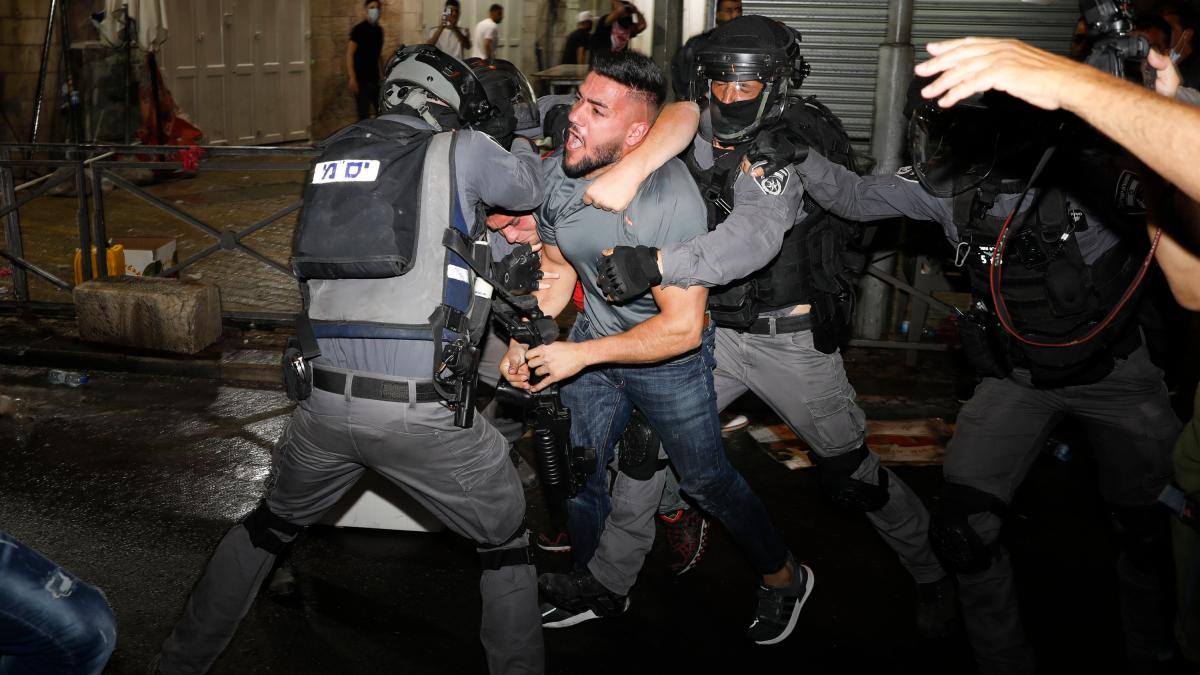 After renewed clashes between Palestinians and Israeli security forces in Jerusalem, concerns about a major conflict grow.

Serious clashes broke out on Monday on the Temple Mount in the old town.

Videos on the Internet showed how police officers used stun grenades, tear gas and rubber bullets against stone-throwing Palestinians in front of the Al-Aqsa Mosque.

According to the Palestinian Red Crescent, 215 people were injured, four of them seriously.

A little more than 150 people were taken to hospitals.

According to police, nine officers were injured.

The number of injuries could increase.

There had already been confrontations during the night at the Damascus Gate and in the Sheikh Jarrah district.

Protests have also been reported from other cities.

The country is celebrating the conquest of the Arab eastern part of Jerusalem, including the Old City, during the Six Day War in 1967. For fear of violence, the Israeli police prohibited Jews on Monday from visiting the Temple Mount during planned flag marches through the Old City.

The Palestinians see East Jerusalem as the capital of a future state of their own.

The situation in the West Bank and in the Arab-dominated eastern part of Jerusalem has been tense since the beginning of the fasting month of Ramadan.

Around 300 Palestinians and around 20 police officers had been injured in violent clashes in Jerusalem since Friday.

The background to this is the threat of evictions by some Palestinian families in the Sheikh Jarrah district.

Earlier, Palestinian militants from the Gaza Strip had once again fired rockets at the Israeli border area.

According to the military, the warning sirens wailed in the city of Sderot and other localities.

One of them apparently intercepted the missile defense.

Prime Minister Benjamin Netanyahu defended the actions of the Israeli security forces and assured that Israel will act decisively to enforce "law and order".

Jordan and Egypt summoned the Israeli ambassadors to protest against the Israeli actions at the Al-Aqsa mosque.

The US expressed concern about the situation in Jerusalem.

The US Presidential Office announced that security advisor Jake Sullivan had informed his Israeli colleague Meir Ben-Shabbat in a telephone conversation on Sunday.

"Sullivan also reiterated the United States' grave concerns about the possible evictions of Palestinian families from their homes in Sheikh Jarrah," the White House said.

The riots in Jerusalem spread to the Palestinian territories in the West Bank and Gaza Strip.

The radical Islamic Hamas, which controls the Gaza Strip, as well as Palestinian President Mahmoud Abbas, supported the demonstrators in Jerusalem.

Jordan's foreign ministry said it had called in Israel's charge d'affaires in the country. UN Secretary General António Guterres urged Israel, according to a spokesman, to exercise “maximum restraint”. According to a report in the Times of Israel newspaper, the UN Security Council will deal with the situation in Jerusalem.