Xi Jinping and his mother: the "promise" of the two generations of communists 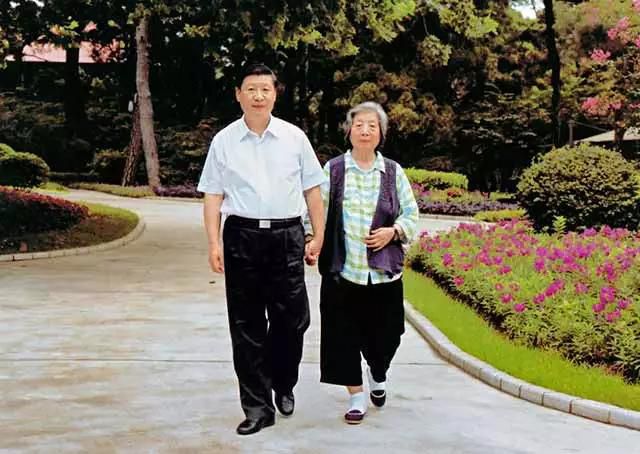 Xi Zhongxun also praised his wife. He once said to his children: "Your mother is an excellent Communist Party member!"

From the stories of Xi Jinping and his mother, we can deeply understand the tacit understanding and "promise" between mother and child.

In 1943, in a cave dwelling in Suide, Qi Xin saw for the first time the eight characters "Party's interests come first" written by Chairman Mao Zedong on the wall for Comrade Xi Zhongxun.

That year, she was nineteen years old.

In the summer of 2000, Qi Xin returned to Haojiaqiao Village to visit the folks.

In the long-term revolutionary struggle, we have taken care of the overall situation with one heart, persisted in working at the grassroots level, and worked silently in various positions arranged by the organization.

Later, Qi Xin recalled two experiences in her life that benefited her a lot: First, two years in the front anti-Japanese base area, withstood the test of war, and the arduous fighting life in the anti-melting pot cultivated my sentiment of revolutionary optimism and strengthened me. The revolutionary struggle has established a communist outlook on life. Second, he has worked at the grassroots level in the rural areas of the Shaanxi-Gansu-Ningxia Border Region for eight years, nurtured by the working people, and built a deep relationship with them.

At the same age of fifteen, on January 13, 1969, Xi Jinping carried his bags and went to the countryside to come to Liangjiahe in northern Shaanxi to become an educated youth. He spent 7 years of youth here.

In those years, Xi Jinping felt the warmth from Liangjiahe. He and his fellow villagers ate, lived, and worked in the same place, accepted the hardship of life, and passed the "flea barrier, diet barrier, life barrier, labor barrier, etc." Thought Off".

In January 1974, Xi Jinping officially became a member of the Communist Party of China. That year, he was twenty years old.

During the years of the educated youth, the sewing kits made by Xi Jinping by his own hands have been with him.

The three words "mother's heart" embroidered on the sewing kit are the affectionate condensation of mother and child, the uncomplaining contribution to the people during the united revolutionary career, the regret-free support for the children's dedication to the country, and the hard-working and hard-working. Yu's original intention.

A mother-child connection, the unreserved and unreserved heart of the party, the country, and the people, is the "promise" between Xi Jinping and his mother.

She followed the rules of the family and wrote letters to Xi Jinping, who worked in the field and took up a leading position, admonishing him to "get out of the cold" and tell him to be strict with herself.

Integrity and self-discipline are the bottom line for Communists to serve as officials.

Since the 18th National Congress of the Communist Party of China, the Party Central Committee with Comrade Xi Jinping as the core has promoted the strict governance of the Party to a new historical height, and historic achievements have been made in the construction of party style and clean government and the fight against corruption.

"Being innocent, doing things cleanly, and acting frankly as an official" is the "promise" between Xi Jinping and his mother.

"Fighting for life, happy life, fighting every day, happy every day." This is a true portrayal of Comrade Xi Zhongxun's glorious life, and it is also a self-encouragement and inspiration for future generations.

When Qixin worked at the Central Party School, her unit was far away from home, and she and her family were always separated from each other.

Only on weekends can she take the bus home once. It is already eight or nine o'clock in the evening when she arrives, and she has to rush back to work on Sunday night.

But Qi Xin never considered whether to stay with the children for a while, or even whether to switch jobs and stay closer to home.

At that time, what she thought in her heart was to obey the organization's arrangements and not to delay work. Even if the child was seriously ill, she never asked for leave.

Together, Xi Zhongxun's words to tell her "work well, study well, and handle everything well" are the motto of life, and I also use this to encourage Xi Jinping.

In the Spring Festival of 2001, Xi Jinping greeted and told Xi Jinping on the phone: "As long as you do your job well, you are the greatest filial piety to your parents. This is responsible for your family and yourself. This is the same."

With the trust and trust of the people on his shoulders, Xi Jinping is tireless and conscientious. He is both a leader and a struggler.

On April 27, 2021, General Secretary Xi Jinping had a cordial exchange with the people of all ethnic groups who participated in the ethnic cultural activities of the "Sing Fair" on March 3 outside the Guangxi Museum of Nationalities in Nanning.

The people are supreme, and maintaining a Communist's willingness to "selflessness" and the spirit of dedication is the "promise" of Xi Jinping and his mother.