The Arab Coalition to Support Legitimacy in Yemen announced the interception and destruction of a "booby-trapped" drone launched by the Houthi militia towards the Kingdom of Saudi Arabia, while the Yemeni army forces and the tribes continued to advance towards the city of Al-Hazm, the capital of Al-Jawf, in conjunction with their advance towards the camp of building blocks A 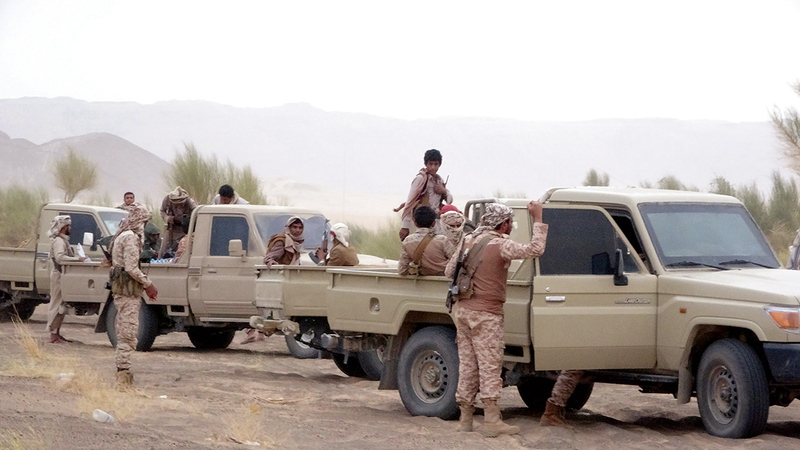 Members of the Yemeni army on the front line against the Houthi militia in Marib.

The Arab Coalition to Support Legitimacy in Yemen announced the interception and destruction of a "booby-trapped" drone launched by the Houthi militia towards the Kingdom of Saudi Arabia, while the Yemeni army forces and the tribes continued their advance towards the city of Al-Hazm, the capital of Al-Jawf, in conjunction with their advance towards the strategic building camp in the same governorate, with Fighting continues on the fronts west of Ma'rib, while the joint forces foiled an infiltration attempt east of the city of Hodeidah on the western coast of Yemen.

In detail, the Arab Coalition to Support Legitimacy in Yemen announced, at dawn yesterday, the interception and destruction of a "booby-trapped" drone launched by the Houthi militia towards "Khamis Mushait" in the Kingdom of Saudi Arabia, and the coalition confirmed taking practical measures to deal with the sources of threat to protect civilians and civilian objects.

On the field, the Yemeni army forces and the tribes supported by the Arab coalition continued their advance on the fronts east of the city of Al-Hazm, the capital of Al-Jawf Governorate, at the expense of the Houthi militia, achieving new victories.

Field sources in Al-Jawf confirmed that the forces and tribes had completed clearing governing sites in the eastern front of "Bir Al-Marazeeq", including "Teb Dabash, Jabal Abu Shed, and Al-Mutadara", and advanced towards the area of ​​"Jadan Plateau" in the "Duhaidha - An-Nudd" sector, amid the collapse of the militia sites and their members suffered losses. big.

According to the sources, the army and tribes forces advanced towards "Al-Hazm City", the capital of Al-Jawf, according to the plans drawn, in addition to their advance towards the strategic building blocks through two axes: the first from Al-Jaddafar, and the second from the direction of the Churches camp.

The army and tribes supported by the Arab coalition launched a massive attack on militia sites in the Al-Alam area between Al-Jawf and Marib, and made new advances, and the militias inflicted many deaths and injuries, destroyed combat vehicles and other plunder.

In Marib, the army and tribes launched a massive attack on militia sites in the Al-Mashjah front, inflicting heavy losses on them, destroying 13 combat vehicles, and killing and wounding a number of militia members. Others were captured, including the leader of the Nehm front, called "Abu Qais", along with a prominent figure in the ranks of The Houthis, field sources preferred not to mention their name now.

The sources indicated that the Yemeni army's air defenses were able to shoot down an explosive drone launched by the Houthi militia towards military sites in the Kassara front, west of Ma'rib.

The Arab coalition fighters continued to launch raids in support of the Yemeni legitimate forces, targeting Houthi sites, gatherings and vehicles in different areas of the governorate, and inflicting heavy losses on equipment and lives, and 18 bodies of Houthi elements that fell in separate areas in the vicinity of Marib were confiscated yesterday as a result of the battles and air strikes.

The Houthi militia targeted the city of Marib yesterday at dawn with a ballistic missile, the fourth in days it launched against civilian objects and the displaced in the city, as a response to the losses it incurred on the battle fronts.

The commander of the 139th Infantry Brigade in the Yemeni army, Brigadier General Ahmed Ali Al-Buraihi, confirmed that the militias suffered daily defeats on the outskirts of Marib on various fronts, indicating that the general mobilization would represent an additional force for liberation, and pointed to a qualitative shift in the course of the battles, especially in the "Ragwan" front located between Ma'rib. And hollow.

In Saada, the Yemeni army's artillery bombed a militia site in the Al-Raqo area in the Munabbah district, causing direct casualties among the Houthi elements who were gathered at the site.

In Hodeidah, on the western coast of Yemen, the joint forces settled clashes against the militias in the 16th kilometer sector, east of Hodeidah, in which various heavy and medium weapons were used, which erupted after Houthi elements tried to infiltrate towards the contact lines in the region, where the attempt was thwarted and infiltrators inflicted heavy losses.

The militias continued to launch their attacks against city notables in separate areas of the western coast, and yesterday they bombed residential neighborhoods in the city of Hais, including the Al-Rab'a Al-Ala neighborhood and Al-Mughal neighborhood, using 120 caliber mortars, causing panic and panic among civilians.

• The Yemeni army and the tribes launch a massive attack on militia sites in Al-Mashjah, and are inflicting heavy losses on them.