Michael Kruse is supposed to lead the FDP back on the political stage in Hamburg, he himself is also aiming for the Bundestag. He advises his party to improve their “emotional access” in order to appeal to new layers. 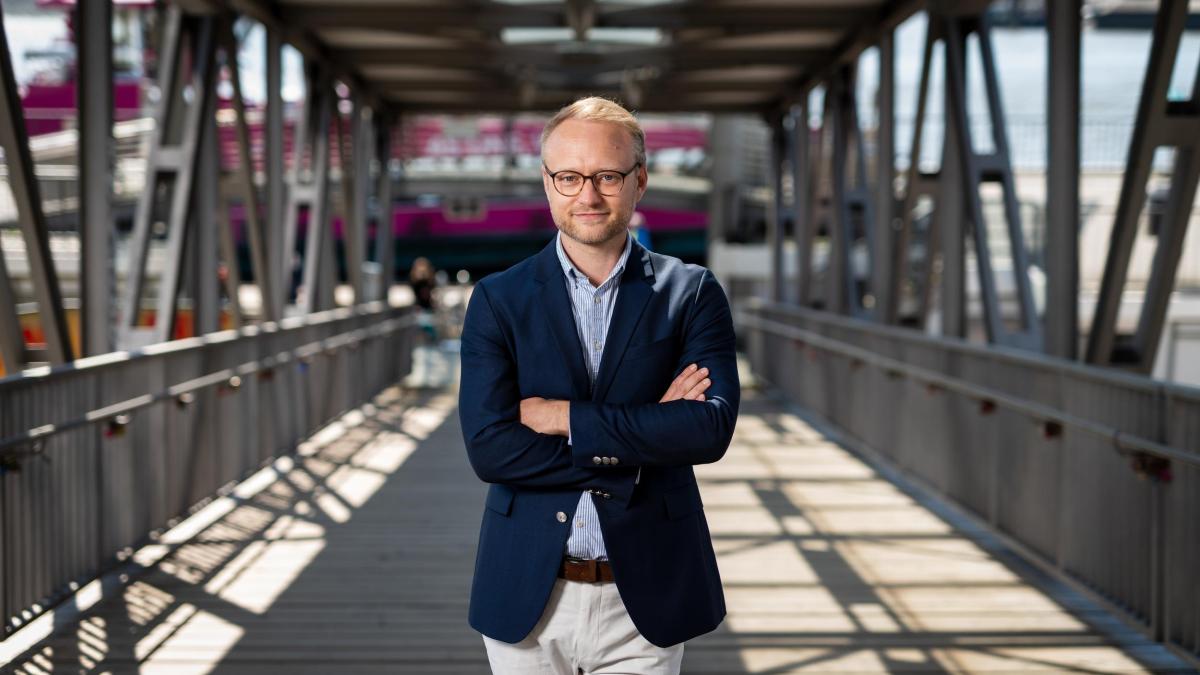 Michael Kruse is back in politics - and with all his might.

The former co-chairman of the Hamburg FDP parliamentary group not only secured his party's top candidate for the mayor election two weeks ago, but was also elected as the new state chairman and thus the successor to Katja Suding.

The 37-year-old wants to bring the Hamburg Free Democrats, who were kicked out of the state parliament with 4.9 percent in the elections in February 2020, back into focus through concepts for the economy, which has been badly hit by Corona.

The political style should also change.

You suggested the Landungsbrücken as a meeting point.

The port birthday would actually take place here these days.

I find it very regrettable that we as Hamburg residents can no longer enjoy it that much, especially here at the Landungsbrücken, where the future and the past meet so beautifully.

But the FDP could hardly have allowed the port birthday.

No, unfortunately not at the moment.

But it is a good time to talk about what is also not possible in Hamburg these days.

We see that in Schleswig-Holstein at least outdoor catering with a hygiene concept and with small numbers of people outside is possible.

And that should also work in Hamburg.

We know from aerosol researchers that there is no great danger from this.

Doesn't Mayor Peter Tschentscher (SPD) have that on his credit side?

It is difficult to prove which measure led to which success. Just as it is difficult to prove which measure has not been successful. Let's take the exit restrictions: of course, the city must take effective measures to prevent hundreds of people from secretly meeting to host super-spreader events. Going for a walk in the evening is not dangerous, it is very healthy. That is why the curfew is wrong. In any case, it is not appropriate from the point of view of civil rights. The economist in me would say: It is not accurate because it does not prevent large illegal meetings, but small legal ones. Good actions do what they should, not the opposite.

Now we are right in the middle of current politics, which you had to say goodbye to after the 2020 general election because the FDP just missed entry into the state parliament.

Was the idea of ​​returning to politics always there?

No it wasn't. In the first phase, I was busy looking after the professional future of the members of the parliamentary group at the time, and I felt a great responsibility for that. And then it happened that I focused a lot on my company. We do statistics for clinical trials and we had a lot more to do with the start of the pandemic. And during this time I allowed myself the freedom to stop following day-to-day politics as closely, for example. I was a little further away. This inner space was important so that new ideas could arise. In late autumn, politics came closer to me again because after the so-called breakwater lockdown, many entrepreneurs and self-employed people approached me and I felt the growing need and also the desperation in conversations. So it was clear to methat my skills and my main topics could be important for the FDP. This ultimately gave rise to the idea of ​​starting again with a candidacy for the Bundestag and also for the state chairmanship.

Both candidacies were then also successful.

Why does it make sense to bundle the office and the possible mandate in one person?

That doesn't always have to make sense, but in the current situation it is. Anyone who has a mandate in the Bundestag and can thus have a good influence on the public can then also take on the important duties in a party.

I'm taking over a well-run association from Katja Suding, but we have to get more public awareness in Hamburg.

And we also have to communicate a little more internally.

With Ria Schröder, the Hamburg FDP has elected a young woman, who is already quite well known, to second place on the list and as deputy state chairwoman.

What do you want to do differently together?

The way back to citizenship will not succeed as an individual struggle. The whole team has to make sure to start a new movement. The omens are good. We are growing very fast as a party and now have more than 1,600 members in Hamburg. We haven't had that since the early 1990s. It will be important for the FDP to give the economy a perspective after Corona. Self-employed and medium-sized companies are faced with the shards of their life decisions. I believe that the central task of the FDP is to help the people who have really always taken on responsibility in the last few decades to get back on their feet. And we have also been talking about digitization for many years.Four years ago we introduced this in the federal government into the exploratory talks with the CDU and the Greens and were laughed at wearily. Everyone can now see that Germany has a huge challenge when it comes to digitization in administration. And then, very importantly, there are civil rights, which came under the wheels so quickly in times of the pandemic. Here we will place a greater emphasis.

As the state chairman, you can also influence the attitude in the federal government. What do you advise your party when looking for a partner?

First wait for the elections, I don't give that much to surveys. Otherwise, the right and left margins are no contact for us for parliamentary cooperation. At Union, SPD and Greens we are open to discussions, although I can do more with a Hamburg-style SPD than with the current party chairman. But I am not one of those people who do a 'big exclusionitis' beforehand. As a politician you are called upon to present good solutions and to make them public. In the end, it's all about a good result for the FDP - the best partners are then those with whom you can get the most important points implemented.

Let's look to Hamburg: Red-Green governs with an overwhelming majority.

Where do you see the space for the FDP?

I definitely have the feeling that the rooms are there.

Many people feel that there is only one type of politics left in this city.

The alternative perspectives that a political-public discourse actually always needs are no longer perceived as strongly.

The very homogeneous looking red-green block scares off some, this also includes the great fear of the mayor when it comes to opening up new perspectives, for example for outdoor catering.

From digital lessons at Hamburg's schools to help for companies that are shaken by the Corona policy: There are great opportunities there, because the Senate cannot convince.

The Greens were at eye level with the FDP for a while, but now they bind much larger groups of voters to themselves - also with a more emotional address, with a kind of attitude towards life. Is it difficult for the often cool-looking FDP?

The FDP also offers emotional access, we share a common idea of ​​freedom and we are a strong human network. But I see what you mean. We may not yet sufficiently convey that to the public. Especially with younger people, empathy is a quality that is required. This old party bickering, the knocking down of the competition, repels many. Respect and empathy have become more important, and that is also becoming more and more noticeable in the FDP. If I talk a lot about the economy after Corona, it is because behind every impending bankruptcy there are individual fates. What is expressed in numbers is a harsh reality for many people. A lot of empathy is also required for these topics.