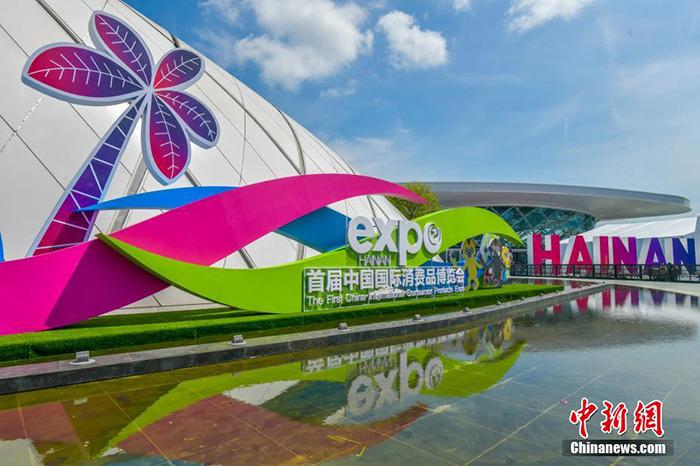 After the Canton Fair, the China International Import Expo and the Service Trade Fair, China's national-level exhibition "new army"-China International Consumer Goods Fair (hereinafter referred to as "Consumer Fair") opened in Haikou on the evening of the 6th.

He pointed out that hosting the China International Consumer Goods Expo and providing a global consumer boutique display and trading platform is conducive to the sharing of opportunities in the Chinese market by countries around the world, is conducive to the recovery and growth of the world economy, and is also conducive to China's supply of more high-quality consumer products to the world.

Analysts said that the holding of the Consumer Expo once again declared to the outside world that China, which has been opening up, is willing to share market opportunities and growth dividends with the world.

"Multinational companies are the biggest beneficiaries of this Consumer Expo. With a total exhibition area of ​​80,000 square meters, 60,000 square meters are international exhibition areas, accounting for 75% of the total area. The community exhibits high-quality goods and services from zero distance.” Zhao Ping, vice president of the China Council for the Promotion of International Trade Research Institute, told a reporter from China News Agency.

It is reported that there are 648 participating companies and 1,193 international exhibiting brands from 69 countries and regions.

Not only that, international brands will hold 81 debut events during the exhibition.

Yu Miaojie, Secretary of the Party Committee and Deputy Dean of the National Development Research Institute of Peking University, said in an interview with a reporter from China News Agency that, taking the auto market as an example, auto sales in China have accounted for about one-third of global auto sales. The investment layout in China is to see a huge consumer market, and the holding of the consumer expo is to "make the cake" for multinational companies.

Sun Jue, managing director of Swarovski Crystal Business Greater China, said bluntly: "With the strong recovery of China's economy in the new world after the outbreak of the new crown epidemic, we are full of confidence in future development."

The South Square of the Hainan International Convention and Exhibition Center displays the theme landscape of the Consumer Fair.

Consumer Expo will add impetus to the world economy

At present, the new crown pneumonia epidemic is still spreading in many countries, and there are still many uncertain factors in the world economy.

Zhao Ping mentioned that while the epidemic situation is severe, major economies have launched large-scale quantitative easing, which has increased the sovereign debt burden of emerging economies, and global financial risks are also rising.

"Under this background, the global economic recovery needs to inject more powerful impetus."

In the latest forecast of the IMF (International Monetary Fund), China's GDP growth rate in 2021 will reach 8.4%, an increase of 0.3 percentage points from the forecast at the beginning of the year.

Yu Miaojie said that China has become the strongest locomotive and the biggest driving force for global economic growth.

It is worth noting that China's GDP in the first quarter increased by 18.3% year-on-year, and the pace of recovery of the consumer market accelerated. The national per capita consumption expenditure increased by 17.6% year-on-year in real terms, reversing the four consecutive quarters of year-on-year decline.

"This Consumer Expo will further promote the expansion of China's domestic consumer market. Consumption is now the key to promoting China's economic growth. It is a very important carriage, and this carriage is not only driving China, but also the world." Yu Miaojie Say.

From "buying the world" to "selling the world", China is not only a key consumer "market" in the hearts of multinational companies, but also a "factory" that global consumers cannot do without.

For foreign businessmen, entering the first Consumer Expo is like traveling in the "ocean" of consumer goods in China.

The Consumer Expo specially set up 31 provinces, autonomous regions, municipalities directly under the Central Government and Xinjiang Production and Construction Corps, as well as two separate groups in Xiamen and Dalian, respectively, to organize local consumer boutiques and time-honored brands to participate in the exhibition.

Hong Yong, an associate researcher at the Institute of Electronic Commerce, Research Institute of the Ministry of Commerce, believes that the consumer fair platform should be used to create a “never ending consumer fair” by combining online and offline. International companies have new channels to explore the Chinese market, and they should also be encouraged Well-known e-commerce platforms at home and abroad help domestic companies set sail and build a new development pattern with services.

Yu Miaojie said that the Consumer Fair has built a "two-way" bridge for global buyers and sellers. In the process of connecting domestic and international markets, promoting Chinese goods and services overseas is also the right meaning of holding a consumer fair.

Zhu Xiaoliang, Director of the Department of Market Operation and Consumption Promotion of the Ministry of Commerce of China, also stated that the Consumer Expo is conducive to promoting the smooth flow and efficient sharing of global consumption resources and factors, realizing the coordinated development of domestic and external demand, imports and exports, and promoting domestic and international double cycles.