The lost Chinese missile .. Did it land in India? Or he passed by Iraq? And when will it fall?

Social networking sites were full of information, predictions and ridicule after the Chinese Space Administration lost control of the "Long March 5B" missile, so what is the truth of this information and predictions? What is the content of the irony? 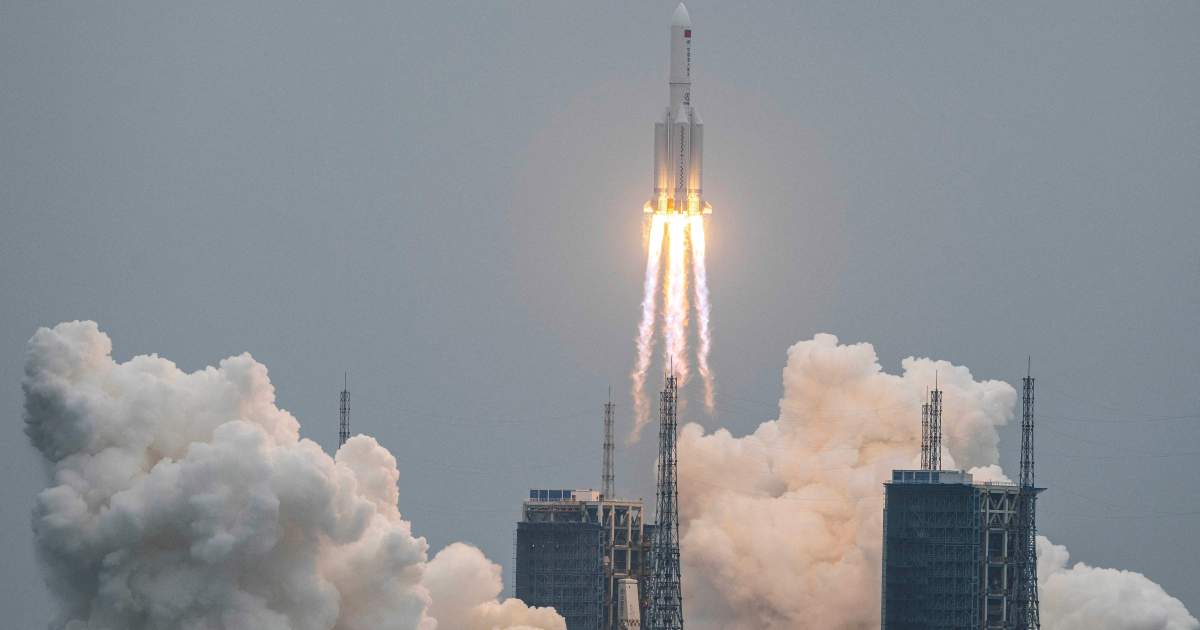 Social networking sites were full of information, predictions and ridicule after the Chinese Space Administration lost control of the "Long March 5B" missile, one of the largest and most powerful Chinese missiles, which increased fears of the risk of the most dangerous load of space falling on Earth.

And the "Sanad" news monitoring and verification agency in Al-Jazeera network monitored the most important misleading news and incorrect information about the "lost missile", which was circulated by users of social networking sites during the past hours, the most prominent of which are:

The fall of the missile in India

Facebook and Twitter accounts have posted videos and photos that they say document the moments of the Chinese missile strike in India.

The moment the Chinese missile fell in India https://t.co/worXHhAaVx

By checking the images and the circulating clips, it was found that they are old and have been published in news about various incidents during the past years.

Photo circulation in the past:

Bahrain: The pipeline bombing is a "terrorist act" linked to Iran https://t.co/NHooBRXs0G pic.twitter.com/bBPjUTRlLm

Video trading in the past:

Iraqi accounts published a video clip they said documented the passage of the missile over the airspace of the city of Nasiriyah.

verifying the rolling clip, it was found that it is old and linked to the fall of a number of meteors in Iraqi provinces.

Sanad indicates that the missile moves in an elliptical path, and orbits around the Earth every 90 minutes, which means it passes to all countries of the world.

The movement of the missile can be tracked from this site.

The fall of the missile in China and Algeria

Other accounts claimed a fall in China, and this clip was broadcast.

moment of the fall of the Chinese missile on # India,

By checking the clip, it was found that it is old, and it is due to the explosion of a spacecraft during the past months.

India and China were not the only two countries that had a share of this false news. Rather, Algeria joined it and published accounts alleging that the missile fell on an Algerian city.

news of the fall of the Chinese missile on an Algerian city after it was lost control in the air # Algeria # China pic.twitter.com/LWHRMzNqQz

Despite the preoccupation of a large number of tweeters on the communication sites with the news of the missile and the possibility of its fall, some dealt with this event with irony, especially since the Chinese missile represents a threat in the event of its fall, and this incident comes in the midst of the repercussions of the "Covid-19" pandemic that swept the world and its source was Wuhan. Chinese.

Imagine that this remains in the safety of God, and hoping to hear that China has lost control of a missile weighing more than 22 tons, and now it is going in the kingdom of God and it will fall anywhere in the world and he and his sustenance remain.

No one knows the Chinese missile, where will it fall, boys ?!

The story of the Chinese missile De Lu, you will stay,

China has served us, the service of the lifetime, and Godpic.twitter.com/goc9idnY4t

I don’t know why the Chinese missile will fall on the Great Pyramid.

An expected date for the "fall of the missile"

According to local media quoted by US Defense Department spokesman Mike Howard, the US Space Command is currently tracking the path of the Chinese missile, expecting it to enter the Earth's atmosphere on May 8.

Howard explained that it is not possible to determine the exact entry point of the missile into the Earth's atmosphere, explaining that the 18th Space Surveillance Squadron will provide daily updates on the location of the missile.