The song of youth, this young sings

△On April 19, 2021, Xi Jinping came to Tsinghua University for inspection. This is when Xi Jinping left school, waving to the teachers and students.   Brilliant May, we usher in another May Fourth Youth Day.   "Youth is like the early spring, like the morning sun, like the sprouting of a hundred flowers, like the new emergence of a sharp blade, the most precious period of life." Youth is the f 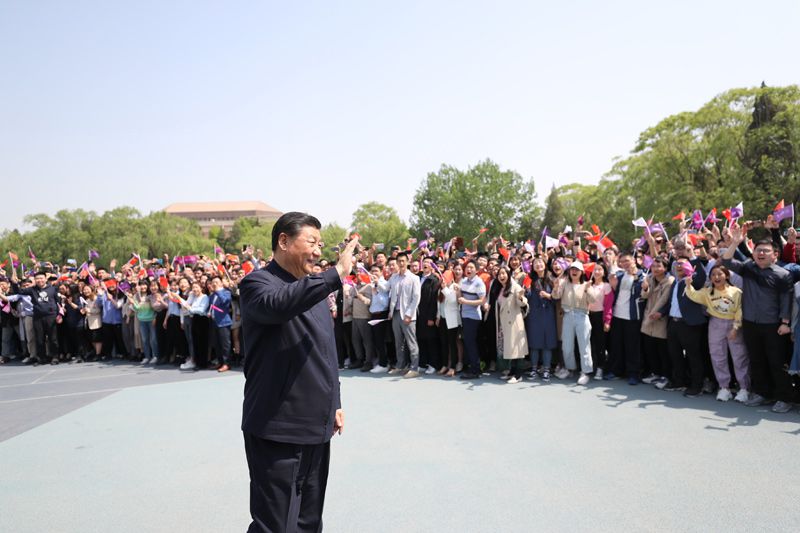 This is when Xi Jinping left school, waving to the teachers and students.

Brilliant May, we usher in another May Fourth Youth Day.

"Youth is like the early spring, like the morning sun, like the sprouting of a hundred flowers, like the new emergence of a sharp blade, the most precious period of life." Youth is the future of the motherland and the hope of the nation.

Since the May Fourth Movement, Chinese youth have fought for the people, dedicated themselves to the motherland, and struggled for a happy life, composing magnificent songs of youth.

2021 is the first year that my country has implemented the "14th Five-Year Plan" and embarked on a new journey of building a modern socialist country in an all-round way. It is also the 100th anniversary of the founding of the Communist Party of China.

Standing at a new historical starting point, how should young people use youth to write a colorful chapter worthy of the times and worthy of history?

"The majority of young people must shoulder the historical mission, strengthen their confidence in moving forward, set great ambitions, make great virtues, become talents, and shoulder great responsibilities, and strive to become newcomers of the era who can serve as the important task of national rejuvenation. A splendid flower blooms in the unremitting struggle of mankind." On April 19 this year, General Secretary Xi Jinping encouraged young people in this way during an inspection tour at Tsinghua University.

"Youth are the most energetic and dreams", "Good sons and daughters are in the four directions, and those with aspirations will struggle without regrets" "The great rejuvenation of the Chinese nation will eventually become a reality in the relay struggle of the vast number of young people."...

Good words and enlightenment will ignite the enthusiasm of the youth to sing the song of youth with practical actions.

Patriotism must not remain on slogans, but must closely link one's own ideals with the future of the motherland and with the destiny of the nation, take root in the people and contribute to the country.

During the inspection at Tsinghua University, Xi Jinping sent a message to the young people that they should love the country and the people, inspire belief, get inspiration, and draw strength from the party history study, constantly strengthen the "four self-confidence", and continuously strengthen the ambition, backbone, and confidence to be a Chinese, and establish The firm ideal of fighting forever for the motherland and the people and dedicating sincerely.

Since the emergence of the new crown pneumonia epidemic, from treatment to prevention and control, from scientific research to equipment production, many "post-90s" and "post-95s" have formed young commandos on the front line of the fight against the "epidemic". They are not afraid of hardships, hardships, and sacrifices. Carrying the mountain of responsibility with arms, showing the youthful and passionate style, and showing the hope of the Chinese nation.

The mission of national rejuvenation must be achieved by struggle, and the sail of life's ideals must be raised by struggle.

On July 7, 2020, Xi Jinping replied to 118 graduates of the Karamay campus of China University of Petroleum (Beijing), affirming that they "go to Xinjiang to work at the grassroots level, and are determined to work together with the people of all ethnic groups, and strive to become usable and capable of performing important tasks." The choice of life for the builders of the West.

"Countless oil people have used their lofty ambitions to open up wasteland, explore oil and produce oil, fight the desert and Gobi, and fulfill the solemn promise of'I offer oil to the motherland'." Chen Tenghui from the Karamay campus of China University of Petroleum (Beijing), After graduation, he chose to work for PetroChina Dushanzi Petrochemical Company.

"There is only a desolate desert, no desolate life." A slogan like this stood on the way to the desert highway to the Tazhong oil field.

This is a portrayal of the lives of countless oil people, and it also bears witness to the spirit of contemporary young people's struggle for the country.

Learning is the ladder of growth and progress, and practice is the way to improve skills.

On the May Fourth Youth Day in 2013, General Secretary Xi Jinping came to the China Academy of Space Technology of China Aerospace Science and Technology Corporation to have a discussion with the youth representatives.

The general secretary pointed out that the majority of young people must persist in facing modernization, facing the world, and facing the future, and strengthen the sense of urgency to update knowledge, learn eagerly, not only to lay a solid foundation of knowledge but also to update knowledge in time, to study hard theories and actively master skills, and to continuously improve their knowledge. The quality and ability that meet the development of the times and the requirements of the career.

In recent years, the relevant team of China Aerospace Science and Technology Corporation China Academy of Space Technology has successfully completed the first flight of the Long March 5, which has successively broken through a number of key technologies and effectively resolved the production bottleneck, fully ensuring the complete success of the Long March 5 missed flight. And laid a solid foundation for the subsequent various aerospace engineering tasks.

The average age of the team members is 32 years old, and more than 80% of young people under 35 years old.

The global network of Beidou satellites and the domestically-made large aircraft rushed into the sky... Behind countless achievements, the efforts of the youth are condensed, and the wisdom of the youth is shining.

Chinese young people in the new era have experienced ups and downs in practice, strengthened their muscles and abilities, constantly mastered new knowledge and new skills, and are growing into newcomers worthy of the task of national rejuvenation.

To compose the song of youth in the new era, one needs to be an activist and a down-to-earth doer.

On the battlefield of poverty alleviation, a large number of "post-80s" and "post-90s" young people charge and fight on the front line, display their youth, and fulfill their original aspirations and missions.

Struggle is the thickest background of youth.

The vast number of young people are brave to be pioneers, pioneers, and devotees who are at the forefront of the times. They are not afraid to face all difficulties and obstacles. They are forging ahead in the waves, breaking through the thorns and thorns, and creating performance in tackling difficulties. They will definitely create. Let the world admire the Chinese miracle!