Members of Syria's Christian minority who are now living in exile say the president manipulated society while suppressing dissent. 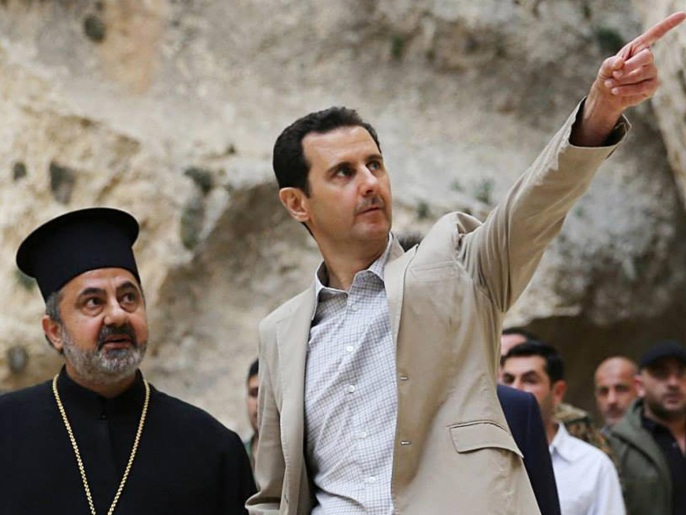 In his report, published by the British Middle East Eye website, the writer Sufyan Aubin said that after 5 years, Najwa (who refused to reveal her family name for fear of prosecution) still remembers feeling sick when she called on a Syrian officer to obtain information about her missing son Hani. 16 years old.

Najwa learned later from a friend of his, as Nabil, 18, told her that a man working with the Syrian army had recruited the two young men to join the forces stationed at Tabqa military airport, north of the Raqqa governorate, to repel an ISIS attack.

Nabil Najwa quoted the recruiter as saying: "You Christians are the elite of our nation. Bashar Al-Assad chose you to fight."

The next day, their unit withdrew to the government-controlled Asrya village in Hama Governorate.

But they never arrived, after taking refuge for the night on a farm near the air base, the unit came under attack by the Islamic State once again, and Nabil was one of the few who survived the bullets, after hiding in a car, while Hani was not found.

“And the lion dares to say that he is protecting us ?!” Najwa said - with tears streaming in her eyes as she sat in a quiet café in the Latin Quarter in Paris, telling her story to the journalist for the first time.

Syrian Christians are often portrayed as supporting President Bashar al-Assad throughout the uprising that began on March 15, 2011, and which escalated into a 10-year war.

But far from Damascus, in France, Christian refugees who survived the war tell a more complex story.

Although a large part of the Christian leadership in Syria has already chosen to side with the Syrian government, countless numbers of Syrian Christians do not support it, while others have been active members of the opposition.

When the war broke out in 2011, the number of Christians was 2.2 million, but it decreased to 677,000 in 2021, according to the index of persecution of Christians in countries of the world published by the non-governmental organization OpenDoorz.

Regardless, Assad, an Alawite, presents his family as an ally of minorities in Syria.

By using the scarecrow of extremist Islamic groups, Assad was able to maintain relative legitimacy among some Western political circles despite his government's official disavowal of its responsibility for the violations, according to Ziad Majed, a French political scientist of Lebanese origin and professor at the American University in Paris.

Majid says that the Syrian regime "has established a social hierarchy that distinguishes minorities that are perceived as" beneficial "- including part of the upper and middle classes of Sunnis - from the predominantly Sunni working class in the countryside or the suburbs.

In the summer of 2012, when the conflict escalated following a massacre of more than 100 civilians in the western region of Houla northwest of Homs, Dr. Haitham Saad's life was turned upside down.

He was filmed treating political opposition figure Riad Seif, one of the injured who flooded hospitals in the Syrian capital, Damascus, while the army was suppressing the demonstrations.

Soon after, Jarrah was arrested and imprisoned by a branch of the Syrian intelligence.

Saad recalls that several dozen prisoners who share his cramped, cold cell died from the cold during the winter months, while others bled to death after being repeatedly beaten by the guards.

The 60-year-old said, "When you are tortured with electricity by 5 people at the same time, you would rather die a thousand times. I tried to end my life by hitting my head against the wall, to no avail."

He added, "After a few weeks of this hell, I begged my tormentor to kill me," but one of the guards objected, saying: "The doctor is Christian, we cannot eliminate him."

When Saad was released in June 2013, he learned that his son had been killed by a pro-regime sniper after he fled the army.

According to Mazen Darwish, shooting Christian civilians, beating them to death, or leaving them to die in prison cells by the very authority that presents itself as their protector is not uncommon.

Authorities arrested Mazen Darwish from 2012 to 2015, the lawyer and head of the Syrian Center for Media and Freedom of Expression (a non-profit organization based in France), and Amnesty International declared him a prisoner of conscience.

He himself is from the Alawite minority, like Assad, but this did not spare him the fate of the Christians.

In Syria under the rule of the Assad family, the government has linked its fate to the Alawite and Christian minorities, with these communities prioritizing government jobs or privileges to bolster support.

Fabrice Balanche, a specialist in the geopolitics of the Middle East and author of "Alawite Region and the Syrian Authority," explains that Damascus "used" religious minorities "to build its political system.

By aligning himself with Christians and the educated, urban middle class of all sects, Assad's intention was to present himself as more progressive than most Syrians, as the political scientist Ziad Majed points out in his book In the Head of Bashar al-Assad.

Even before the war, this tactic led to a dual use of violence.

The writer noted that Basil Khoury, who was imprisoned for two years under Hafez al-Assad in 1987 due to his association with the Syrian Communist Party, now lives in southern Paris.

"I feel like I'm Syrian first, then Christian," he told Middle East Eye.

The tranquility of the Parisian suburb contrasts with the memory of his violent arrest in 1987 while he was a student.

"One of the regime's biggest fears is alienating minorities, especially the Christian community, which is mostly educated, as they want to avoid the spread of hostile political awareness," Khoury said.

Khoury noticed the favoritism he enjoyed in his daily life as a Christian in Syria, especially during the war.

He said he would have gone through ordeal had his name been Muhammad, referring to the frequent police searches and insults many Syrian Muslims face.

Najwa expressed her embarrassment at the manifestations of discrimination she had received in the country, such as the administrative staff allowing her to skip queues, and her car passed the checkpoints without checking, and she said that she was seeing the anger in the eyes of others around her.

Ziad Majed pointed out that the favoritism that stirred resentment against religious minorities was a deliberate move by state officials, as "fueling this hostility allows the government to claim that it is the savior of minorities facing the hatred of the Sunni majority, while deluding Christians that they are in favor."

By discriminating against Syrian citizens and supporting sectarianism despite its secular rhetoric, the Ba'athist rule in the Hafez and Bashar al-Assad reigns claimed that it had an indispensable role in extinguishing the fires he lit with his hands.

Assad rarely appeared outside Damascus during the war.

But on Easter in 2014, he chose to appear in the Christian village of Maaloula, accompanied by some clerics, a few days after the village was retaken from the grip of the rebels.

The Syrian Christians had no doubt that the target party with these images that were broadcast around the world was the West.

His efforts seem to have paid off at least in France, which is a refuge for thousands of Syrian Christians.

In an article published in the French newspaper "Le Monde" on April 20, 2018, a humanitarian aid worker described the French non-governmental organization "Protecting Eastern Christians" as "an excellent and inexpensive lobbying agency for Assad."

Assad's image as a defender of religious minorities was reinforced with the rise of ISIS in Syria and Iraq in 2013. He became the common enemy of the international community and Assad, as the group attacked anyone who did not follow its hard-line interpretation of Sunni Islam, including Christians and the Al-Assad community.

Journalist Tigran Yaghavian said that "Damascus' good treatment of Christian minorities may be to show off to the West, which has sided with the opposition in the war, but more importantly, the Assad government has polished its image in front of its main strategic ally since 2015, Russia."

In 2015, Russian combat aircraft carried out their first raids on Syria with the blessing of the Patriarch of the Russian Orthodox Church.

At the time, Vladimir Putin claimed to be defending the Eastern Orthodox sects, according to Eghavian in his book, The Historically Forgotten Minorities of the East.

"We took the lion hostage"

The Syrians who spoke to Middle East Eye said that the Western focus on Christians in Syria and the Middle East is misleading.

Saad, who demonstrated in the streets of Damascus alongside Christians and Muslims alike, said, "These stories with a religious focus that attract the media do not deserve all this coverage."

Historian Frederick Pichon believes that the presence of Christians among the ranks of the opposition does not change the fact that the Sunni community is the main engine of the revolution in Syria.

Bichon added that Christians had never participated in the protests en masse.

On the other hand, some Christian opponents see this weak participation as evidence of Assad's success in pursuing a "divide and rule" approach.

Samira Moubayed, vice president of Syrian Christians for Peace, confirmed that Christians are victims of Assad, like other citizens, and are exposed to exploitation in the international arena, explaining that "by presenting the Christians as his followers and allies, Assad has taken us hostage."

Yagafian stated that the Christian community's precaution from supporting the opposition came primarily due to the fragility of its conditions in Syria.

According to a church official in Damascus, Christians represented 25% of the population of Syria in the aftermath of World War II, and this percentage decreased to about 5% prior to the civil war in 2011, and continued to decline, reaching only 3.6% in 2021.

The writer quoted a former resident of Aleppo, using the name "Samir", that the Muslims of the homeland accuse him as a Christian of collaborating with Assad, but he is keen to explain the role that Christians have played throughout Arab and Syrian history and until now, saying: "We are not only threatened by terrorist groups. We also suffer from the injustice of the Syrian regime, like our Muslim brothers. We would like to live in a state that respects freedom and justice. "