Decoding the "exclusive train" of the space station compartment: the long five B rocket has a "hardcore trick"

China News Service, Wenchang, April 29th, title: Decoding the "exclusive train" of the space station cabin: the long five B rocket has a "hard core trick"   Author Guo Chaokai Sangqian   On April 29th, as the Long March 5B carrier rocket successfully sent the sky and core module of the China Space Station into space, the construction of the China Space Station began. In order to be the "exclus 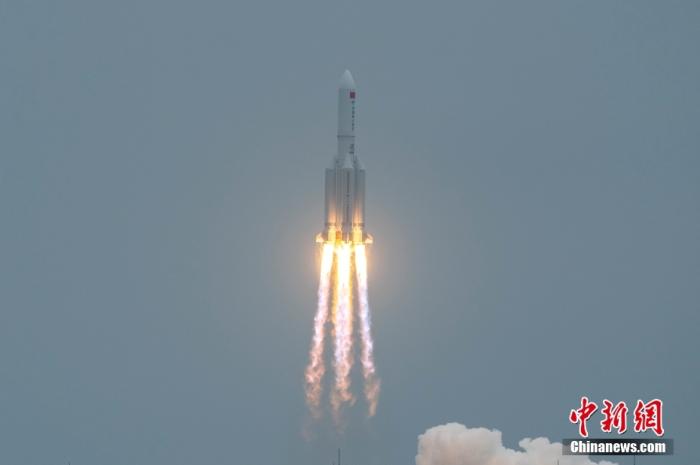 In order to be the "exclusive train" for transporting the space station, the Long March 5B launch vehicle has fully inherited the development experience and foundation of the Long March 5 launch vehicle, and at the same time, it has carried out a number of technical research and innovations, and has trained a "hard core". Trick".

The picture shows the Long March 5B Yao-2 carrier rocket lifted off from the Wenchang Space Launch Site in China.

The Long March 5B launch vehicle was developed by the China Academy of Launch Vehicle Technology affiliated to China Aerospace Science and Technology Corporation. It is a new type of launch vehicle specially developed for the construction of China's manned space engineering space station. It was successfully launched on May 5, 2020. fly.

This year and next two years, China will complete the space station orbit construction through 11 missions.

Only the Long March 5B carrier rocket is capable of launching the manned space station module.

In order to meet the mission requirements of the space station, the development team has carried out a series of technical research and innovation, and has successively overcome core technologies such as the development of super-large fairings, the connection and separation of large-diameter capsules and rockets, and the precise control of large-thrust direct-to-orbit deviations. Continuous optimization and improvement have realized the re-upgrade of innovative technology.

At about 11 o'clock on April 29, Beijing time, China launched the space station Tianhe core module with the Long March 5B Yao-2 carrier rocket at the Wenchang Space Launch Field.

The Long March 5B rocket adopts a one-and-a-half configuration and is currently the only one in the world that has a direct-to-orbit rocket.

This type of rocket system is simple, all engines are ignited on the ground, and there is no need to perform inter-stage separation, high-altitude engine starting, etc., which reduces the probability of failure and improves reliability.

To achieve the first and a half into orbit, the rocket engine is a test.

The former has the characteristics of large thrust, allowing the rocket to obtain greater acceleration after ignition, and the latter has the advantage of high specific impulse, which can provide the rocket with an efficient speed increase.

"The'gene' formed by the combination of hydrogen and oxygen and liquid oxygen and kerosene engines determines that a first-level and semi-direct orbit rocket can be constructed, and the inherent reliability of the rocket is inherently high." Deputy Director General of Long March 5B Rocket Designer Li Pingqi said.

At about 11 o'clock on April 29, Beijing time, China launched the space station Tianhe core module with the Long March 5B Yao-2 carrier rocket at the Wenchang Space Launch Field.

Later, the Wentian and Mengtian experimental modules of the China Space Station will rendezvous and dock with the Tianhe core modules and be assembled in orbit. This requires a "zero window" rocket launch.

Rendezvous and docking is like "threading a needle" in space. Once there is a deviation, the space station module will consume fuel to change orbit to meet the docking requirements, causing loss of capacity.

The Long March 5B rocket is a cryogenic rocket, facing the problem of cryogenic propellant refueling and complicated pre-launch procedures. The implementation of a "zero window" launch is much more difficult than a normal temperature rocket.

In order to solve this problem, the rocket development team optimized and improved the iterative guidance scheme of the on-board control system. When the deviation between the take-off time and the scheduled time does not exceed ±1 minute, the rocket can correct the deviation during the flight and move the space station orbital module. Precisely feed into the original target position.

"In other words, as long as the rocket takes off within these two minutes, the rocket will reach the only end point, helping the space station module to achieve a smooth'hand in hand' in space." Li Pingqi said.