"NBK" approves a bill to "establish and organize an owners union"

The Federal National Council approved, during its session the day before yesterday at its headquarters in Abu Dhabi, headed by Saqr Ghobash, a draft federal law regarding the establishment and organization of the Owners Association, which aims to establish a legal entity that includes real estate owners for the purpose of managing, developing, investing, maintaining and preserving real estate units, and parts a 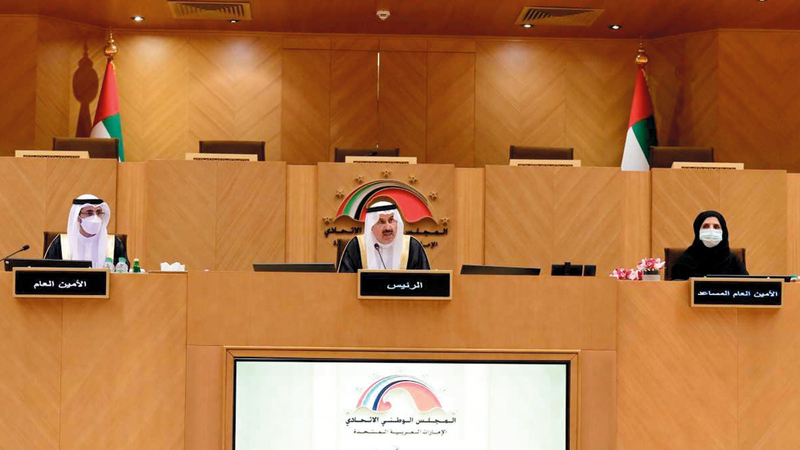 "NBK" approves a bill to "establish and organize an owners union"

The council emphasized the importance of the Sheikh Zayed housing program for citizens.

The Federal National Council approved, during its session the day before yesterday at its headquarters in Abu Dhabi, headed by Saqr Ghobash, a draft federal law regarding the establishment and organization of the Owners Association, which aims to establish a legal entity that includes real estate owners for the purpose of managing, developing, investing, maintaining and preserving real estate units, and the common and detached parts, And enhancing social responsibility, providing a safe and positive environment, opening channels of communication between owners, and strengthening interdependence among them.

The Council amended the name of the bill by adding the word "establishment", because "what is required is the provision for the establishment of federations, as they do not exist at the federal level, and this law is the one that creates them for the first time."

Anyone who agreed to establish it becomes a member of the federation, and the rest of the owners of the units in the residential neighborhood may join the union whenever they express their desire to do so, and the union shall have a general assembly upon its establishment that includes all members of the union in the residential neighborhood, and in the case of multiple owners of one unit, they shall have one representative in Association.

In the event that the owners do not agree on the establishment of the union, any of them would have the right to request the College Court, in whose jurisdiction the property is located, for permission to complete the procedures.

The court determines the founding committee, which will complete the registration procedures in case the union is authorized.

In addition, the member Hamid Ali Al-Abbar Al-Shamsi directed a question to the Minister of Energy and Infrastructure, Suhail bin Muhammad Al-Mazrouei, about the procedures followed by the ministry to grant people of determination housing assistance and cases of exemption from paying it.

The committee has finished drafting the final draft of the decision and submitting it to the Council of Ministers for discussion and approval.

The draft resolution included conditions for obtaining housing assistance, such as loans and grants, and special conditions for exceptional cases from people of determination and other groups.

Al Shamsi said: “I hope the minister will pay attention to the category of people of determination and look at them in terms of exceptional circumstances, because there are movement, audio and visual disabilities.

As a result, they have a heavy burden and need housing additions, and they have other needs and exceptions.

I wish to examine the case of studying the disabled category, and we await an appropriate response that will be in the interest of people of determination after the issuance of the decision.

The minister responded by saying that the committee is made up of several ministries, including the Ministry of Community Development, and is concerned with looking at such cases, and the decision will look at all groups of society, including the people of determination.

Member Ahmed Abdullah Al Shehhi directed a question to Suhail bin Mohammed Al Mazrouei, in which he said: “Given the global pandemic (Covid-19) that the world is going through, and the impact of many sectors, including the construction sector, a large number of beneficiaries of the Sheikh Zayed Housing Program were affected, Those to whom the financial aid declaration (loan or grant) was issued, and because the validity period of this approval is for one year, and there are those who were unable to complete contracting procedures and obtain residential lands from the government due to the global pandemic, which may result in the loss of their right to financial aid issued to them ... What are the measures taken by the Ministry regarding the expiration of the deadline for the financial aid decision as a result of the beneficiaries' inability to use it due to the outbreak of the (Covid-19) virus?

The minister responded by saying that the ministry worked with stakeholders in the government to analyze the services provided to the beneficiaries of the program, and put in place mechanisms and proactive measures with the aim of ensuring the continuity of the progress of government services and mitigating the effects of precautionary measures.

Among the measures that have been taken are providing the service of opening the implementation file completely remotely, reviewing some requirements, allocating an additional time limit for the beneficiaries to complete the documents, and sometimes reaching a period of six months, from which nearly 800 beneficiaries benefited, and the Ministry issued a package of exemptions and facilities for contractors. Consultants were granted extensions due to the delays caused by the pandemic.

He added that the Sheikh Zayed housing program was integrated into the ministry, and became one of its apparatus, and its terms of reference were not canceled and its name remained the same.

Ahmed Abdullah Al Shehhi said: “We thank the Ministry and the government for the initiatives they have taken, and we hope that these initiatives reach the beneficiaries, contractors and consultants directly, given the impact of the pandemic on all housing-related groups. We also wish to give an opportunity for citizens to benefit from the Sheikh Zayed Housing Program more than It was before ».

He added, "The program is very important for citizens, and a great national symbol that should be preserved. We call for activating the new draft decision after integrating the program into the ministry to decide on citizens' requests related to housing."

The provisions of the law shall apply to every real estate established by the federal authorities in any area of ​​the state’s territory, including the free zones, and in which a number of persons are jointly owned.

The provisions of the law may be applied to real estate created from other than federal entities after the approval of the concerned emirate.

A penalty of imprisonment for a period not exceeding one year and a fine not less than 500 thousand dirhams and not more than one million dirhams or one of these two penalties shall be inflicted on whoever: deals with others in the name of the owners association before registering it with the ministry or the competent authority, and impersonates a board chairman, member of the board of directors, or Angel Union Director.

Also punishable by imprisonment for a period of no less than a year and a fine of not less than 100 thousand dirhams and not more than 500 thousand dirhams, or one of these two penalties: the chairman or member of the board of directors, or the director of the union, if he submits invalid budgets or contracts with his knowledge of this. And every person who, knowing that, approved incorrect documents pertaining to the owners' union.

The Council created four articles related to penalties that stipulated the following: Anyone who embezzles or squanders money from the Union’s funds, or facilitates for others to seize on him.

The Minister of Energy and Infrastructure, in coordination with the competent authority, shall issue a decision determining the names of the employees who have the authority to review the Federation’s papers and records and record any violations therein, and submit a report on them to the Ministry to take the appropriate action, and the executive regulations determine the controls and procedures for carrying out this work.

Citizens who benefited from the additional time limit to complete the documents in the Sheikh Zayed Housing Program.

"Owners' union may be established in residential neighborhoods in which the number of owners of real estate units is five or more."

"A permit to complete the procedures can be requested from the court in the event of a disagreement on the establishment of the union."