Chinese tomato 'passed off' for Italian: maxi confiscation of preserves, 6 under investigation in Livorno 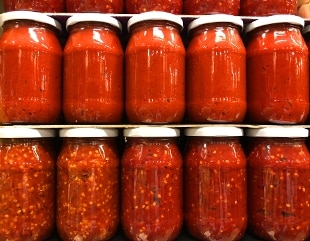 April 26, 2021Tons of foreign tomatoes 'passed off' as Italian. Millions of canned tomatoes in bottles, glass jars, jars also intended for retail sale and that we find on our table every day. This is the one faced by the Carabinieri for the Protection of Agri-food and Forestry in the province of Livorno.

The budget is 3,500 tons of preserves, also in packs and briks already packaged and labeled as '100% Italian tomato' and / or '100% Tuscan tomato' and about 977 tons of semi-finished product and tomato concentrate - instead - of origin foreign (non-EU), most likely Chinese, closed in drums and bins, for a total of 4,477 tons and a commercial value of about 3 million euros.

The seizure ordered by the Livorno prosecutor took place at the deposit of the Italian food SPA - of the Petti Group, a canning company located in Venturina Terme and Campo alla Croce in Campiglia Marittima (Livorno). You are the people under investigation for commercial fraud.

The tomato, packaged and ready for sale, was kept inside the covered warehouses of the company, while the several thousand barrels and boxes of semi-finished products and foreign tomato concentrate were mainly stored on an external square in the area of ​​the plant. The provision follows an articulated anti-fraud investigation coordinated by the Livorno Public Prosecutor's Office and which with the support of the Customs Agency documented how the suspects had started the systematic production and marketing of canned tomatoes labeled as '100% Italian tomato' and / or '100% Tuscan tomato' but which instead came from different origins.

"The product - reads a note from the Agri-food Protection Command of the Carabinieri - was made using significant percentages of concentrated foreign tomatoes (extra-EU) mixed with measured quantities of semi-finished Italian tomatoes". Accounting, administrative and laboratory documents were also seized, including unofficial and handwritten production cards, which clearly show the fraudulent design, i.e. the attribution to the product of characteristics of origin and composition different from the real ones. The 'Scarlatto' operation started in January in the field of food safety and consumer protection, the note clarifies.

What's more, the inspectors of the ICQRF (Central Inspectorate for Quality Protection and Fraud Repression) have ascertained by the company the non-compliance with a recent decree of suspension of production activities at the Venturina Terme plant, for repeated violations of an environmental nature, or rather the construction in that area of ​​a warehouse of about 4,000 square meters in the absence of a building permit. Circumstances that led to the complaint also by the legal representative of the company.