The road to digital Fujian starts with Xi Jinping's imagination

Learning every day丨The road to digital Fujian starts with Xi Jinping's imagination   Learning Everyday From April 25th to 26th, the 4th Digital China Construction Summit was held in Fuzhou City, Fujian Province. On the banks of the Min River, the Fuzhou Strait International Convention and Exhibition Center, the main venue of the summit, welcomes visitors from all over the world.   Speaking of 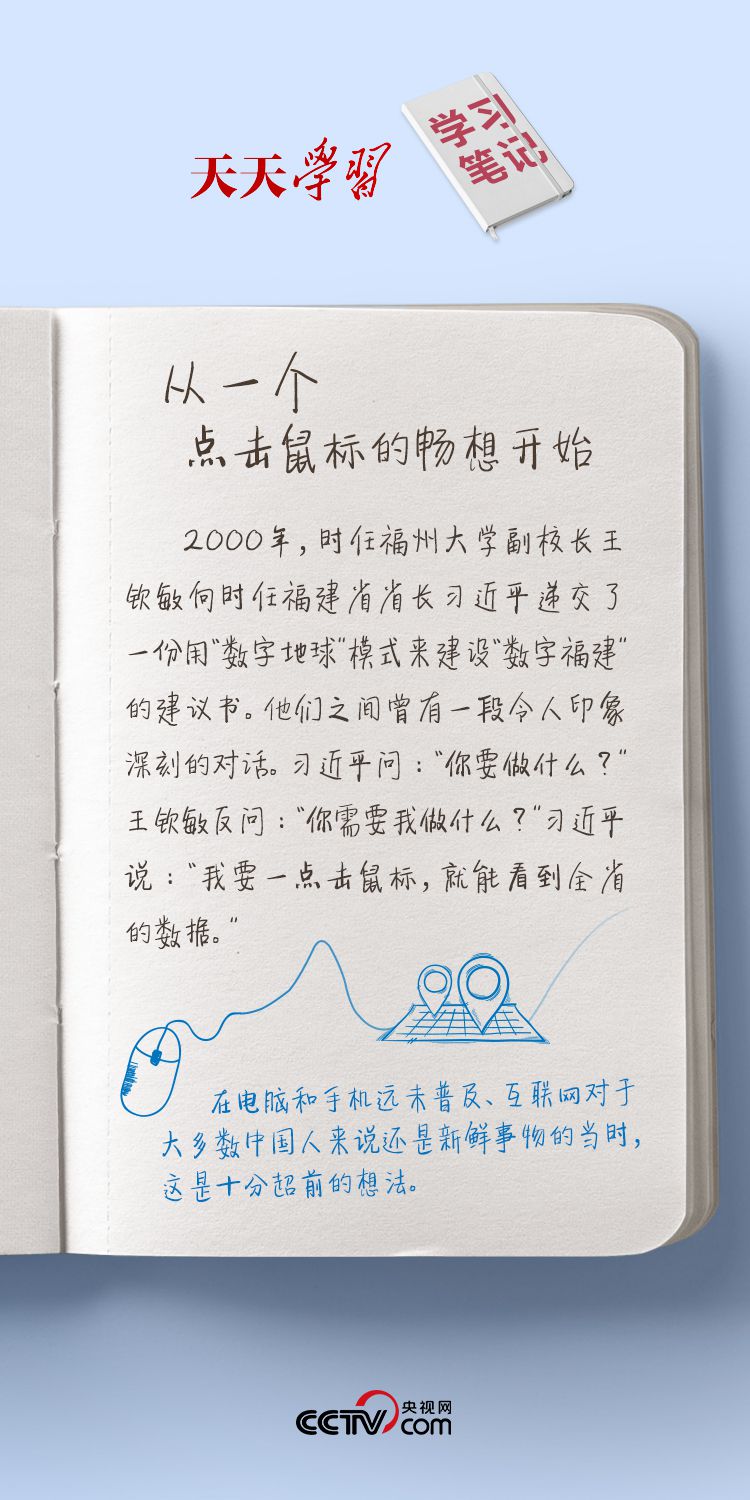 On the banks of the Min River, the Fuzhou Strait International Convention and Exhibition Center, the main venue of the summit, welcomes visitors from all over the world.

As early as 21 years ago, when he was Fujian

It was 2000, and the proposal of "Digital Fujian" written by Wang Qinmin, then vice president of Fuzhou University, who had just returned from abroad for more than a year, attracted Xi Jinping's attention.

Wang Qinmin recalled that his proposal was written before the National Day. He did not expect that on October 12, Xi Jinping gave a whole piece of instruction, which was very detailed.

There was also an impressive dialogue between Xi Jinping and Wang Qinmin.

At that time, Xi Jinping asked Wang Qinmin: "What are you going to do?" Wang Qinmin asked back: "What do you need me to do?" Xi Jinping said: "I need to click the mouse to see the province's data."

This was a very advanced idea at the time when computers and mobile phones were far from widespread, and the Internet was still new to most Chinese people.

Xi Jinping also proposed that the provincial government can set up a leading group for the construction of digital Fujian, with him as the group leader.

Only half a month after Xi Jinping gave instructions, at the 12th Plenary Session of the Sixth Fujian Provincial Committee of the Communist Party of China, which closed on October 27, 2000, Digital Fujian was included in the outline and recommendations of the Fujian "Tenth Five-Year Plan".

This is the first public appearance of Digital Fujian. Since then, a wave of large-scale informatization construction has surged in Fujian.

E-government is the leader in the construction of "Digital Fujian".

At the beginning of 2001, under Xi Jinping’s plan, Fujian Province made forward-looking plans and deployments such as the unified construction of the provincial government information network and the integration and development of information resources. Services are becoming intensified.

At 17:18 on January 16, 2002, Xi Jinping clicked the mouse and the Fujian Government Information Network was officially opened.

At the opening ceremony, Xi Jinping expounded his e-government concept.

Digital Fujian also drives the rapid development of Fujian’s economy. The "2020 Fujian Digital Economy Development Index Evaluation Report" shows that in 2020, Fujian’s digital economy development index will reach 74.58, and the scale of the digital economy will exceed 2 trillion yuan, accounting for more than the province’s GDP. 45%.

The tide rises in the southeast, linking the whole country.

Since the 18th National Congress of the Communist Party of China, the Party Central Committee with Comrade Xi Jinping at the core has been looking to the future, following the general trend, and making a strategic decision to build a digital China.

The data shows that by the end of 2020, the added value of my country's digital economy core production capacity accounted for 7.8% of GDP.

From the idea of ​​"clicking the mouse", digital China is now in full swing in the land of China, and the digital economy is surging, accumulating new momentum for China's high-quality development.