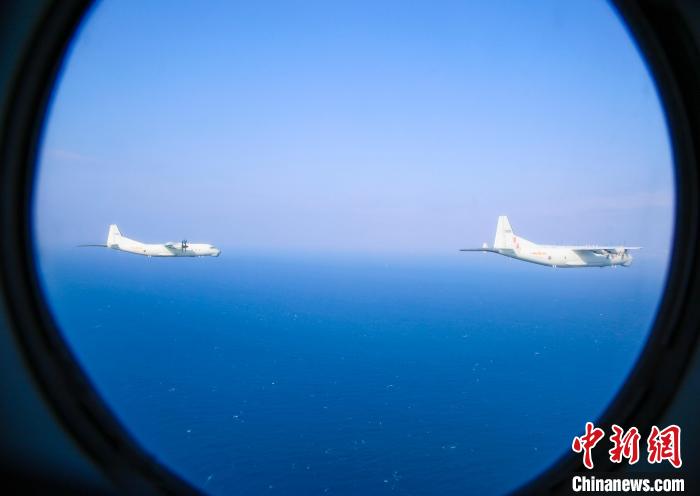 Less than a month after its establishment, a certain regiment of the Naval Aviation Corps of the Southern Theater of the Chinese People's Liberation Army dispatched newly equipped fixed-wing anti-submarine patrol aircraft to the far sea to perform combat readiness cruise missions.

In the view of Yu Yang, the commander of a flying brigade of the regiment, the first fixed-wing anti-submarine aircraft unit of the Chinese army had formed combat capability before the "full moon."

Yu Yang's army was born in this round of China's national defense and military reforms.

Chen Jiangyue, political commissar of a certain naval aviation division, commented that the unit is a "national team" with aviation anti-potential capacity.

A certain regiment of the Naval Air Corps in the Southern Theater organized formation flight training.

How can new qualitative combat power be generated before the "full moon"?

Interviewed officers and soldiers told reporters from Chinanews.com that this stemmed from the three difficulties that the regiment faced in the course of its development.

First of all, anti-submarine warfare is a worldwide problem.

Searching for hidden submarines in the vast ocean is "like looking for a needle in a haystack."

A certain regiment of the Naval Air Corps in the southern theater organized multi-type flights.

The formation of the regiment means that the troops need to complete a lot of work on the establishment of regulations.

The second problem is to achieve a "zero to one" breakthrough in the blue ray of the road.

Faced with brand-new combat procedures and the latest weapons and equipment, there is no experience to follow in the development of the troops. Many pilots have never even contacted anti-submarine operations before coming to the regiment.

In addition to mastering the performance of various high-precision detection equipment, the officers and soldiers have to cast more eyes from the familiar sky to the unfamiliar underwater.

"There are many things to learn." Yu Yang said that officers and soldiers often have professional "quarrels" about how to quickly improve their capabilities.

The way to resolve "differences" is to conduct actual tests during flight training and even mission execution, and to summarize and consolidate practical experience.

The training syllabus was "written out one by one" by the officers and soldiers.

"That time was really important for our growth."

"Flying Shark" refueling in the air.

Receiving equipment, flying tests, performing missions, and training... At the beginning of its establishment, this unit has entered a state of "actual training".

At a time when China's military power reform is superimposing regional situation changes, the dual needs of missions and security situations are another important reason for the rapid formation of combat capabilities of the troops.

To safeguard national sovereignty and security, we need to protect this azure blue "ancestral sea".

When the situation is complicated, Chinese and foreign military planes meet in the cloud almost every day.

The severe regional situation is the third problem that the anti-submarine aircraft forces need to deal with, and it has also given birth to a sense of urgency for all officers and soldiers to improve their core capabilities.

How to understand the "new quality" combat power?

Fixed-wing anti-submarine aircraft can search and verify, analyze information, transmit data, and strike targets, and are comparable to eyes, brains, and fists in anti-submarine operations.

Chen Jiangyue pointed out that the right to control information is the key to victory in modern wars.

The formation of this force has not only brought about an improvement in combat effectiveness, but also a manifestation of "information power."

As a result of facing up to difficult problems and focusing on shortcomings and improving ability, the unit has successively completed a number of major exercises and training tasks and explored a number of technical and tactical results since its establishment more than three years ago.

At present, the regiment’s fixed-wing anti-submarine aircraft have tracked all over China’s coastline, and the number of combat crews has doubled. It has successfully completed several tasks such as searching for submarines, searching and verifying unidentified air conditions.