SpaceX's Crew Dragon capsule, with four crew members on board including Frenchman Thomas Pesquet, is due to dock with the International Space Station on Saturday for a six-month mission. 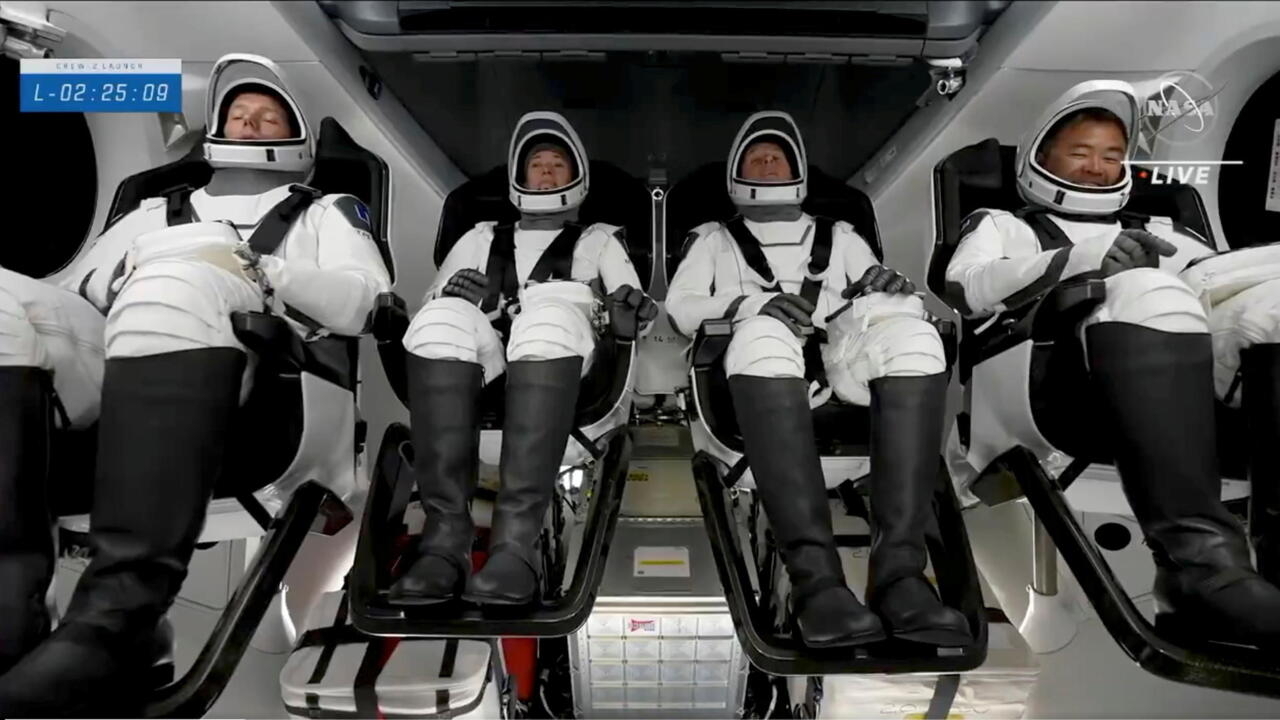 SpaceX's Crew Dragon capsule, with four astronauts on board including Frenchman Thomas Pesquet, is due to dock with the International Space Station on Saturday, April 24, after a successful launch on Friday.

Named Endeavor, the capsule will dock with the Harmony module around 5:10 am Eastern Time (9:10 GMT).

The event is expected to be televised live by the US space agency, as is the ceremony to welcome the newcomers.

In addition to Thomas Pesquet for the European Space Agency (ESA), the three other crew members of the Crew-2 mission are Americans Shane Kimbrough and Megan McArthur and Japanese Akihiko Hoshide.

This is the third such mission for SpaceX since the United States resumed manned space flights.

Liftoff took place at dawn at the Kennedy Space Center on Friday, to applause in SpaceX's control room.

"It's great to be back in space," said Shane Kimbrough upon entering orbit.

The astronauts, who have all been in space, were visible thanks to a camera on board their Dragon ship.

Start without a hitch

The first stage of the rocket came off well and then landed on a platform at sea on Friday. "We are at the dawn of a new era of space exploration," commented Elon Musk, founder of SpaceX and the group. Tesla automobile, which wins with this takeoff a new victory for its companies.

SpaceX has made a name for itself with NASA at a time when Boeing's Starliner capsule accumulates delays in its test flights. The success in May 2020 of SpaceX's first manned test flight broke the Russian monopoly on flights to the ISS and gave the Americans back the ability to accomplish this feat, after the "Shuttle" space shuttle program ended in 2011. Au In the middle of the night, the four members of the Crew-2 mission had said goodbye to their loved ones before boarding the three white Tesla, which has become a tradition, which took them to the launch pad.

The license plates of all three cars said in English "recycle", "reuse" and "reduce" - a nod to the fact that the mission is reusing items that have already been used.

Friday's flight thus reused the thruster used in an unmanned test mission, a first, and the Crew Dragon spacecraft is the same as that of the manned test flight last May.

Thomas Pesquet became the first European to fly aboard a Crew Dragon capsule. The European Space Agency nicknamed the mission "Alpha", in reference to Alpha Centauri, the star system closest to our solar system. "This is truly a golden age for us in terms of operating the International Space Station," Frank De Winne, director of the ISS program for the European space agency, told AFP.

German Matthias Maurer will be the next European to be part of a SpaceX mission this fall, followed by Italian Samantha Cristoforetti next spring.

"Three European astronauts in a row in the ISS is unique for us," said Josef Aschbacher, director of the European space agency.

During its six-month mission, the Crew-2 team will be responsible for carrying out around 100 scientific experiments, including one on the effects of weightlessness on brain organoids (mini-brains created in the laboratory).

Scientists hope this research can help space agencies prepare for missions that will expose teams to the hardships of space for long periods of time, and even help fight brain disease on Earth.