"At any time convenient for him": Putin announced his readiness to hold a meeting with Zelensky in Moscow

Russian President Vladimir Putin said he was ready to discuss with the head of Ukraine Volodymyr Zelensky the relations between the countries at any time convenient for him in Moscow. Putin noted that the current leadership of Ukraine has taken many steps that destroy relations between states. At the same time, he stressed that if Zelensky wants to start restoring relations, Moscow will only welcome this. 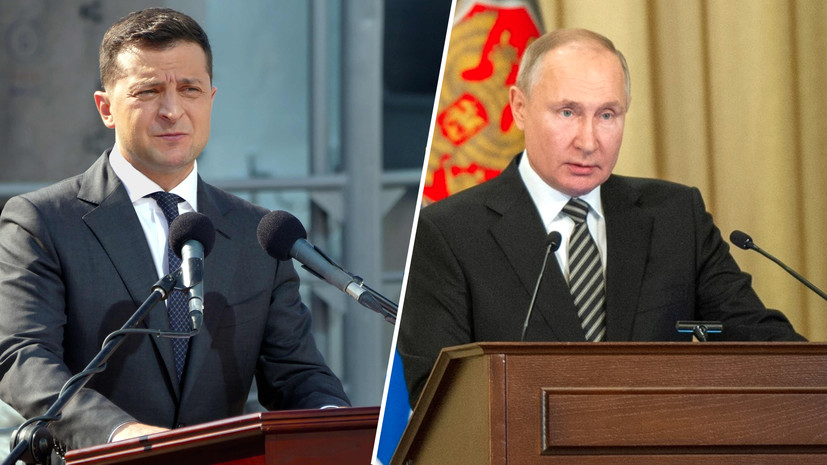 Russian President Vladimir Putin said he was ready to discuss relations between the countries with Ukrainian leader Vladimir Zelensky at any time convenient for him in Moscow.

Putin spoke about this during negotiations with President of Belarus Alexander Lukashenko, commenting on a proposal for a meeting that had previously been received from Zelensky.

The Russian leader noted that the current leadership of Ukraine has recently taken many steps that are destroying relations between states.

According to Putin, this concerns a number of problems in bilateral relations, attempts to destroy the Russian Orthodox Church, as well as attitudes towards the Russian language, Russian-speaking citizens of Ukraine, and Russian citizens living there.

“There were a lot of steps aimed at destroying our relations, which we, of course, can only regret,” Putin said.

At the same time, he stressed that if Zelensky wants to start restoring relations, Moscow will only welcome this.

“If we are talking about discussing the problems of Donbass, then, first of all, the leadership of Ukraine should meet with the leaders of the republics of the LPR and DPR, and only then discuss these problems with representatives of third countries, which in this case is Russia.

If we are talking about the development of bilateral relations, then please, we will receive the President of Ukraine in Moscow at any time convenient for him, ”Putin said.

Earlier, the press secretary of the Russian leader Dmitry Peskov, commenting on the proposal received from the head of Ukraine to meet in Donbass, noted that some prerequisites must be created for communication.

A Kremlin spokesman recalled that over the past few months, on the line of contact in Donbass, "a huge number of provocative attacks on the territories of the self-proclaimed republics by the armed forces of Ukraine" were recorded.

We will remind, on Tuesday, April 20, Vladimir Zelensky invited Vladimir Putin to meet in Donbass.

In his address, Zelensky said that Ukraine and Russia, despite their common past, look to the future in different ways, but said that "this is not necessarily a problem, but an opportunity."

According to him, at the negotiations of the trilateral contact group on Donbass and the meetings of the Normandy Four advisers, “a proposal was made to meet on the demarcation line in order to see and understand the situation as accurately as possible.”

I am ready to go even further and invite you to meet anywhere in the Ukrainian Donbass where the war is going on, ”Zelensky said.

The first deputy chairman of the State Duma Committee on CIS Affairs, Eurasian Integration and Relations with Compatriots Viktor Vodolatsky, in a conversation with RT, noted that the Russian president is consistent in his actions.

“Russia has always offered friendship and peace to everyone.

Today it is important for Russia to preserve peace not only around our borders, but in principle in every state.

For us, Ukraine is a special state.

Ukraine and Russia are one cultural code, these are our family ties ... Of course, we are worried about what is happening on the territory of Ukraine, ”the deputy explained.

On April 21, the former president of Ukraine, head of the Kiev delegation to the contact group on Donbass, Leonid Kravchuk, also announced his readiness to meet with Putin.

Russia has repeatedly emphasized that the country is not a party to the conflict in Ukraine.

At the same time, the Russian Foreign Ministry drew attention to the fact that Kiev was conducting an active disinformation campaign against Russia in order to distract its own population from internal problems.

“In order to divert the attention of the Ukrainian population from the deteriorating situation in the socio-economic sphere and the growing political turbulence, as well as to justify absolutely aggressive militaristic plans, Kiev is conducting an active disinformation campaign.

Its basis is still the same - creating an image of the enemy in the person of Russia, ”said the official representative of the department, Maria Zakharova.

In addition, the representative of the foreign policy department noted that Kiev's actions are associated with the upcoming NATO summit.

We will remind that the aggravation of the situation in Donbass in March was reported by the representative of the DPR Aleksey Nikonorov, accusing the Ukrainian side of an increase in the number of shelling and a lack of efforts to de-escalate tensions.

In early April, the head of the DPR Denis Pushilin also announced the deterioration of the situation on the line of contact.

He also expressed the opinion that the amount of equipment and personnel, which is pulled to the line of contact from the Ukrainian side, says that Ukraine is ready to resume full-scale hostilities.

On April 8, Vladimir Putin held telephone talks with German Chancellor Angela Merkel, during which they discussed the situation in Donbass.

The leaders expressed concern over the escalation of tensions in southeastern Ukraine, and stressed the need for Kiev to strictly implement the previously reached agreements, primarily on establishing a direct dialogue with Donetsk and Luhansk and legalizing the special status of Donbass.