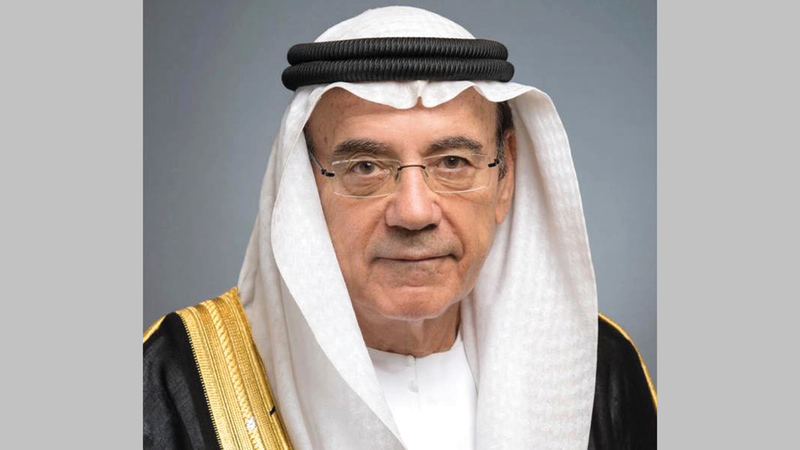 In a speech he gave at the beginning of the lecture, he said: "The support of Sheikh Hamdan bin Rashid, may God have mercy on him, contributed to enabling the UAE University to assume the prestigious position it deserves."

He added: “We meet today and our hearts beat in the name of dear to all of us, the late Sheikh Hamdan bin Rashid Al Maktoum (may God have mercy on him), the Knight of Excellence and Charity who accompanied the late Sheikh Zayed bin Sultan Al Nahyan, and Sheikh Rashid bin Saeed Al Maktoum, on the journey of establishing the state. He learned a lot from them and contributed with them to building this country, to line a march full of loyal patriotic work for his people and all humanity.

He added: «Sheikh Hamdan left with his passing good imprints that cannot be erased by time. He was known for his great love of good heart, rare humanity that encompasses the entire world, and a great ability to work, give and give for the good of all, in order to make them happy, and countless feats.

The march of his bid could not be limited to lines or articles. His main interest was to expedite the presentation of humanitarian work, he was passionate about culture, literature and scientific developments, and he was keen on sustainable human development in a stable global environment based on dialogue and partnership.

He continued: “In 1998 he ordered - may God have mercy on him - to launch an initiative for excellence in the educational field, which is the Hamdan Bin Rashid Al Maktoum Award for Distinguished Academic Performance. The philosophy of the late Sheikh Hamdan was that the distinction that comes from the field is the truest form of excellence, and it should be encouraged, and to highlight the distinguished. From his family to be an example to others. This idea has evolved into a global banner today, led by the Hamdan Bin Rashid Al Maktoum Foundation for Distinguished Academic Performance. ”

He added: “We had the honor at the United Arab Emirates University to receive the attention of the homeland and its unlimited support through the Hamdan Bin Rashid Al Maktoum Foundation for Distinguished Academic Performance, which contributed to enabling the UAE University to occupy the prestigious position it deserves. Innovation, which contributes to the development of the educational system in the country, considering that innovation has become a fundamental requirement in improving the educational process and improving the quality of education outputs, and considering that the Emirati school focuses on promoting innovation concepts, in line with the state's vision, the requirements of the national agenda and leadership directives to establish innovation among generations as an important cultural component , And a station from which to proceed towards leadership and innovation for the future ».