The European Medicines Agency gave the green light to use the American “Johnson &amp; Johnson” vaccine against the emerging corona virus. While Washington said that it is warning against travel to 80% of the countries of the world due to Corona, the number of people infected with the virus worldwide has exceeded 141.67 million n 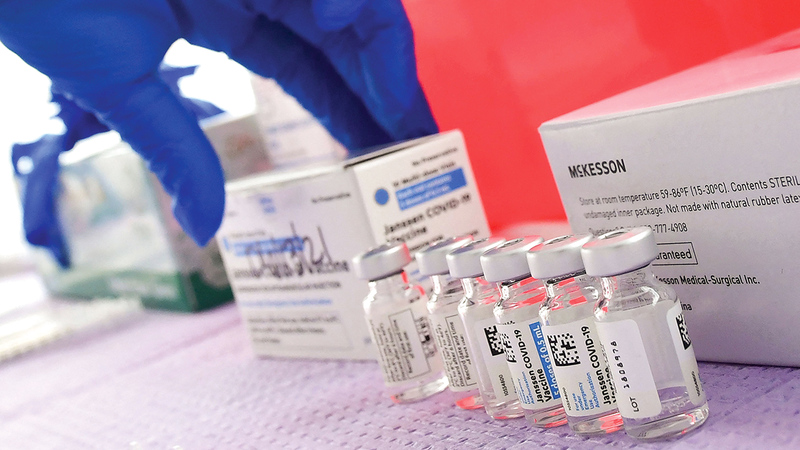 The European Medicines Agency confirmed that the benefits of the Johnson & Johnson vaccine still outweigh the risks.

The European Medicines Agency gave the green light to use the American “Johnson & Johnson” vaccine against the emerging corona virus.

While Washington said that it was in the process of warning against travel to 80% of the countries of the world due to Corona, the number of people infected with the virus worldwide exceeded 141.67 million.

The agency stated in Amsterdam, yesterday, that the active ingredient in the vaccine could cause blood clots in extremely rare cases.

And the Medicines Agency considered that blood clots should be included as a "very rare" side effect of the Johnson & Johnson anti-corona virus vaccine, whose benefits remain greater than its risks.

The European Medicines Regulatory Authority said in a statement that it had found a "potential link" between the vaccine and a blood clot after eight cases in the United States, one of which was fatal.

The Amsterdam-based agency stated that it "finds a possible link between very rare cases of abnormal blood clots when there are low blood platelets," adding that it "confirms that the benefits still outweigh the risks."

Johnson & Johnson said yesterday that it is "very confident" in its vaccine.

In Washington, the US State Department said that it would issue warnings from "level four" not to travel to about 80% of countries, as it called on citizens to "reconsider all travel abroad" because of the risks of "Covid-19".

“As travelers face persistent risks due to the Covid-19 pandemic, the State Department will begin updating its travel advisories this week to better reflect the Centers for Disease Control and Prevention's science-based health travel notices, which outline the current issues that affect them,” the ministry said. On the health of travelers ».

The ministry said that this does not mean "a reassessment of the current health situation in a particular country, but rather reflects a change in the travel advice system."

The United States issued a comprehensive Level 4 warning about international travel in March 2020, and raised it in August as it began again issuing individual warnings to different parts of the world.

The number of people infected with the Coronavirus worldwide exceeded 141.67 million people, while the total number of deaths resulting from the virus reached 3 million and 163,124 cases, according to a Reuters census.

The statistics showed that HIV infections were recorded in more than 210 countries and regions since the first cases were discovered in China in December 2019.

Hungary, which currently still has the highest rate of corona-related deaths in the world, announced data that showed that the epidemic had passed its peak, according to Health Minister Cecilia Muller.

And Bloomberg News reported that Hungary recorded 1645 new infections yesterday, which is the lowest daily level in about two months.

"Our epidemic data is improving. We are seeing a slight decrease after reaching the peak," Minister Cecilia Muller said in a press briefing.

Mueller indicated that the improvement is slow because the more virulent strain of Corona virus, which was first discovered in the United Kingdom, is spreading in Hungary, and it is spreading rapidly and causing more severe symptoms that are difficult to treat.

In addition, an Israeli health official said yesterday, that Israel has recorded eight cases of the Coronavirus strain that was first discovered in India, adding that it believes that the Pfizer / Biontech vaccine is at least partially effective in combating it.

And the Ministry of Health stated that seven cases of this strain were first discovered in Israel last week among expatriates who have since undergone initial tests.

For its part, the Israeli Foreign Ministry said yesterday that Israel and Britain are discussing the possibility of allowing movement between them without restrictions and opening the so-called "green travel corridor", in reference to the success of the vaccination campaigns against "Covid-19" in the two countries.

An Israeli statement stated that the matter was being discussed between Israeli Foreign Minister Gabi Ashkenazi and British Cabinet Affairs Minister Michael Gove in Jerusalem.