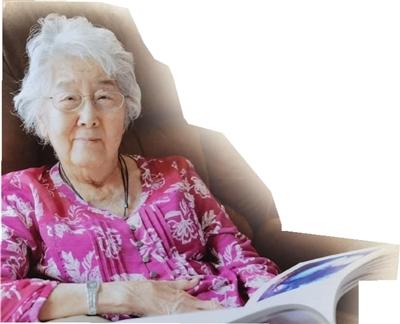 On April 20, the reporter learned from the Municipal Overseas Chinese Affairs Bureau that Sun Yat-sen's granddaughter and Sun Ke's second-daughter Sun Suihua passed away in California on April 16, US time at the age of 96.

Sun Suihua and his sister Sun Suiying uphold the "fraternity" spirit and patriotism of Sun Yat-sen. Although they live overseas, they still care about the construction and development of their hometown.

The two sisters have repeatedly returned to Nanlang Cuiheng to visit relatives and ancestors, and donated more than 1,000 pieces of historical materials in the family collection to the Sun Yat-sen's Former Residence Memorial Hall and the Zhongshan Museum for free.

In 2016, Sister Sun Suihua was awarded the title of "Honorary Citizen of Zhongshan City" by the Zhongshan Municipal Government. In 2018, she was selected as the 10th "Passing on Fire-Outstanding Individuals of Cultural Heritage Dream Builders" by the China Cultural Relics Protection Foundation.

Visiting relatives and ancestors many times

Although he had never met his grandfather Sun Yat-sen, Mr. Sun Yat-sen's noble spirit, noble character and family and country feelings are deeply rooted in Sun Suihua's heart. Sisters Sun Suihua have been invited back to China many times to participate in major commemorative activities such as the 1911 Revolution, the birth of Sun Yat-sen and Soong Ching Ling.

In the 2011 commemoration of the 100th anniversary of the Revolution of 1911, Sun Suihua, who came from the United States, held a cane and was in a wheelchair, and visited the Nanjing Sun Yat-sen Mausoleum with guests from home and abroad.

Although he was over and over, Sun Suihua insisted on climbing the 392 steps with the help of everyone to enter the grandfather's memorial hall.

"Only in this way can I express my respect for my grandfather." Sun Suihua said emotionally.

In front of the sitting statue of Sun Yat-sen in the memorial hall, Sun Suihua stepped forward to arrange the ribbons of the flower basket, and specially asked the two grandchildren to take a group photo together, hoping that the children will remember history and inherit the revolutionary spirit.

After the Ye Ling ceremony, Sun Suihua gifted the old photos collected for many years to the Sun Yat-sen Memorial Hall. "This is a family portrait of our family. I hope to stay in the place where my grandfather rests." She said earnestly.

Although she lives overseas, her hometown Zhongshan has always been her dream place. She has returned to Zhongshan many times to visit relatives and ancestors and pay tribute to her grandfather's former residence.

Despite the inconvenience, Sun Suihua insisted on getting up and getting off the wheelchair with the help of her family, and walking slowly towards the house of her former residence. She said excitedly, "I must go in and sit in my ancestral house." Sitting in the main hall of the former residence. On the wooden chair, Sun Suihua was full of emotions, looking at the photos of her grandparents, she didn't want to leave for a long time.

Let the cultural relics "return to the root"

It has always been the common wish of Sister Sun Suihua and Sun Yat-sen's descendants to return the family's cultural relics to their hometown, and it is also a matter of their continuous efforts and attention.

Over the years, the sisters have repeatedly donated more than 1,000 pieces of historical materials from their family collections to the Sun Yat-sen's Former Residence Memorial Hall and the Zhongshan Museum.

In 2014, 887 pieces (sets) of family cultural relics were donated to the Sun Yat-sen's Former Residence Memorial Museum, including the letters of Soong Ching Ling, the portrait oil paintings of Sun Yat-sen and Sun Ke created in the 1940s by Chang Shuhong, and the clothing and leather suitcases of Sun Ke and his wife. Sun Ke's badges, etc. In 2016 and 2017, Sun Suiying also donated a total of 205 pieces of cultural relics and documents such as home collection ceramics and books to the Sun Yat-sen's Former Residence Memorial Hall.

In addition, in 2017, Sun Suihua also held an exhibition of oil paintings in his hometown. In 2019, the "Collection of Sun Suihua's Oil Paintings" compiled by the Memorial Hall of Sun Yat-sen's Former Residence was published.

These cultural relics, documents, etc. carry the memories and emotions of the Sun family, and contain profound historical significance and cultural and artistic value. They are conducive to the cultivation of Zhongshan's cultural heritage, the research and promotion of Sun Yat-sen's cultural resources, and let more people know about Mr. Sun Yat-sen's Great feat.

In June 2016, Sister Sun Suihua was selected by the Guangdong Provincial Cultural Relics Foundation as the "2016 Outstanding Contributors to the Protection of Cultural Heritage in Guangdong Province"; in November of the same year, she was awarded the title of "Honorary Citizen of Zhongshan City" by the Zhongshan Municipal Government.

In October 2018, he was selected as the 10th "Passing on the Fire-Outstanding Individual of Cultural Heritage Dream Builders" by the China Cultural Relics Protection Foundation.

At the awards ceremony of the "Passing on from the Fire" selection event, Li Sheng, deputy curator of Sun Yat-sen's Former Residence Memorial Hall, received the award.

He recalled the experience of getting along with the two old people at the Sun family gathering to commemorate the 150th anniversary of Mr. Sun Yat-sen’s birth, “They are very concerned about the development of their hometown and the use of donated cultural relics. They told me that donating cultural relics feels like falling leaves back to their roots. "

After winning the "Passing on the Fire" award, Sun Suihua sisters discussed and decided to entrust their nephew Sun Bisheng to donate the 10,000 yuan bonus to the Zhongshan Red Cross, once again using practical actions to interpret their patriotism and love for the country. "Aunt is amiable, low-key and patient, has a strong memory, and has a strong artistic vision." When it comes to his aunt who has just passed away, Sun Bisheng is in a heavy heart. He said that he has contacted relatives in the United States and will mourn his aunt Suihua together. (Author: Wang Xin Linxia liters right)