"Germany has made a decision": Merkel announced her intention to complete the "Nord Stream - 2"

Germany is interested in developing trade ties with Russia and is in favor of continuing the Nord Stream 2 project, German Chancellor Angela Merkel said at a PACE meeting. According to the German leader, the gas that will be supplied through this gas pipeline is no different from the fuel supplied by Russia to Europe through other channels. According to experts, Merkel once again reaffirmed the commitment of the German elites to pragmatic tactics, in which beneficial cooperation is placed above political speculation. At the same time, the United States will not abandon its attempts to disrupt the Russian-German gas transmission project, experts say. 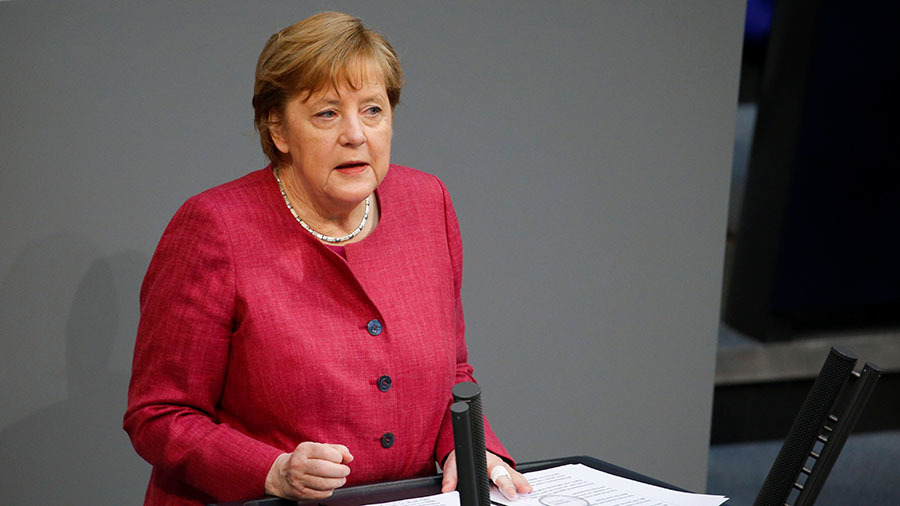 Germany wants to develop trade relations with Russia and supports the construction of the Nord Stream 2 gas pipeline, German Chancellor Angela Merkel said at an online meeting of the Parliamentary Assembly of the Council of Europe (PACE).

She noted that the disputes over the Nord Stream 2 project are part of a wider disagreement between European countries and Moscow, including an element of political struggle.

The German leader cited the work of the already operating trans-Baltic gas pipeline as an argument.

“I would like to point out that ... gas from Nord Stream 1 is no worse than what goes in transit through Ukraine, or gas that comes from Russia through Turkey,” the Chancellor said.

She also recalled that the position of the EU members is expressed in the updated gas directive, which entered into force in May 2019.

The document enshrines a rule according to which a member state of the union itself determines whether the rules of the Third Energy Package apply to an offshore gas pipeline entering its territory.

As Merkel explained, she gets the impression that in the case of criticism of the gas pipeline project, the question is: "Do we want to trade with Russia?"

“We have many conflicts with Russia, which, unfortunately, complicate our relations.

But nevertheless, we must talk, ”she added.

According to experts, Merkel's statement can be regarded as confirmation of Berlin's plans to pursue a pragmatic course in relations with Moscow.

"This position means that the German authorities are pursuing the practical interests of their country, putting them above political differences," said Pavel Feldman, deputy director of the Institute for Strategic Studies and Problems of the RUDN University, in a commentary on RT.

A similar point of view is shared by Alexander Kamkin, a leading researcher at the Center for German Studies at the Institute of Europe, Russian Academy of Sciences.

“Angela Merkel has repeatedly made statements in support of Nord Stream 2.

Today Germany is forced to maneuver between political interests, the special regime of transatlantic relations and the pragmatic interests of business, which is interested in launching the gas pipeline.

There is tremendous pressure on Merkel, but in general, the chancellor's word carries a lot of weight, "the expert said in an interview with RT.

He rejected the idea of ​​curtailing the construction of the gas pipeline.

“We have been conducting this discussion for a long time.

And it is not at all necessary that such measures will lead to changes in Moscow's actions.

I think the opposite is more likely, ”he said.

In early March, the Minister of Ecology of the Federal Republic of Germany Svenja Schulze announced the negative consequences for Germany in the event of a gas transmission project stopping.

The halt in construction could turn into claims for damages for Berlin, she said.

"There is a threat that we will be presented with claims for damages in the International Arbitration Court," said Schulze.

“In this and the next decades, we will need natural gas,” said Schulze.

She noted that it has not yet been decided whether and in what volume the fuel will be supplied through the gas pipeline.

The minister said this during a debate organized by the IFRI think tank and the Konrad Adenauer Foundation.

Kramp-Karrenbauer said that, as far as she knows, lawyers are now dealing with this issue.

However, the minister sees little room for maneuver to stop the nearly completed project.

Earlier, the head of the German Ministry of Defense said that the volume of gas pumped through Nord Stream 2 should be made dependent on the "behavior of Russia."

According to Pavel Feldman, the statements of the head of the German defense department are intended to raise its status in the eyes of Berlin's American partners, who have long opposed Nord Stream 2.

"In Germany, there are disagreements in political circles in connection with the impending transit of power, since Angela Merkel is the outgoing leader," the expert explained.

He did not rule out the influence of the United States on the head of the German Defense Ministry and Alexander Kamkin.

The expert recalled the recent visit of the head of the Pentagon to Germany and suggested that Kramp-Karrenbauer might be "under the impression" of communicating with his American counterpart.

As a reminder, the laying of the Nord Stream 2 began in September 2018; the length of the gas pipeline should be more than 1200 km.

The main line will become the second gas transmission branch connecting Russia and Germany along the bottom of the Baltic Sea.

Nord Stream 2 consists of two lines, the total capacity of which is designed to pump 55 billion cubic meters.

Taking into account the capacities of the already operating Nord Stream gas pipeline, Russia will be able to supply 110 billion cubic meters to Europe in this direction.

In 2019, the United States imposed sanctions on companies involved in the construction of the gas pipeline.

As a result, the Swiss company Allseas withdrew from the project and stopped laying the pipeline.

However, this did not lead to the closure of the project, since Gazprom has involved Russian pipe-laying vessels in the work.

At the end of 2020, the US Senate approved the defense budget for 2021, which also contained amendments on new restrictions on Nord Stream 2.

As the chairman of the board of directors of "Gazprom" Viktor Zubkov said at the end of March, the construction of the gas pipeline will be completed this year, despite the time lost due to the sanctions.

“The work is in full swing, there are very few left.

Of course, this year it will be completed, definitely.

It's a pity for the lost time, but it turned out that way, ”Zubkov said.

Berlin has repeatedly made it clear that it is dissatisfied with the actions of its overseas partner, the leadership of the Federal Republic of Germany drew attention to the inappropriateness of US extraterritorial sanctions.

However, Washington does not intend to ease the pressure.

As the head of the US Department of State Anthony Blinken said at the end of March, the US authorities will continue to impose sanctions against companies involved in the laying of Nord Stream 2.

“We think that this (the construction of the gas pipeline. -

) is a bad idea, and it was important for us to be able to tell our close partner about it directly, Germany ... According to the (United States. -

, we have imposed sanctions against companies who are involved in construction and are trying to complete the pipeline.

We made it clear that we will continue to do this (to impose sanctions. -

The State Department believes that the offshore gas pipeline will become an instrument of "coercion" in the hands of Moscow in the field of foreign policy.

Earlier, Blinken said that he had warned the German side about the US plans to introduce new sanctions after the completion of the construction of Nord Stream 2.

In addition, the gas pipeline builders have to face increased military activity in the work area, which is often provocative in nature.

Andrey Minin, director of the branch of the company - operator of the Nord Stream 2 AG project, spoke about this earlier.

"After the resumption of the construction of the offshore section of the Nord Stream 2 gas pipeline in January 2021, an increased activity of warships, aircraft and helicopters, as well as civilian vessels of foreign states, whose actions are often clearly provocative in nature, is observed in the work area," he said. ...

The opposition to the project comes against the background of accusations against Russia made by the American, Ukrainian and European authorities.

Earlier, White House spokeswoman Jen Psaki said that the United States is concerned about "the growing manifestations of Russian aggression in eastern Ukraine, including the movement of Russian troops to the Ukrainian border."

Similar accusations were voiced by the head of European diplomacy, Josep Borrell.

According to Pavel Feldman, the Joe Biden administration will increase pressure on Berlin to close the Nord Stream 2 project under various pretexts.

“As long as the CDU / CSU alliance remains in power in Germany, the German side will defend its interests and will not succumb to pressure from Washington.

A break in the course can be expected in the event of a victory in the elections for the "Green" parties, in which extremely Russophobic sentiments reign, "the expert believes.

Alexander Kamkin adheres to a similar point of view.

“The topic of Nord Stream 2 remains acute in relations between Washington, Berlin and Moscow. The United States is exerting strong diplomatic pressure on Berlin to promote its LNG producers. For the United States, Russia is a competitor in the EU gas market, so it will continue to put a spoke in the wheels of Russian-German relations even after the launch of Nord Stream 2. However, Berlin will withstand this pressure, and the project will be fully implemented, ”concluded the expert.