The UAE has expressed its strong condemnation and condemnation of the attempts of the terrorist Houthi militia, backed by Iran, to target civilians and civilian objects in a systematic and deliberate manner in the sisterly Kingdom of Saudi Arabia, through a car bomb, which was intercepted by the coalition forces. 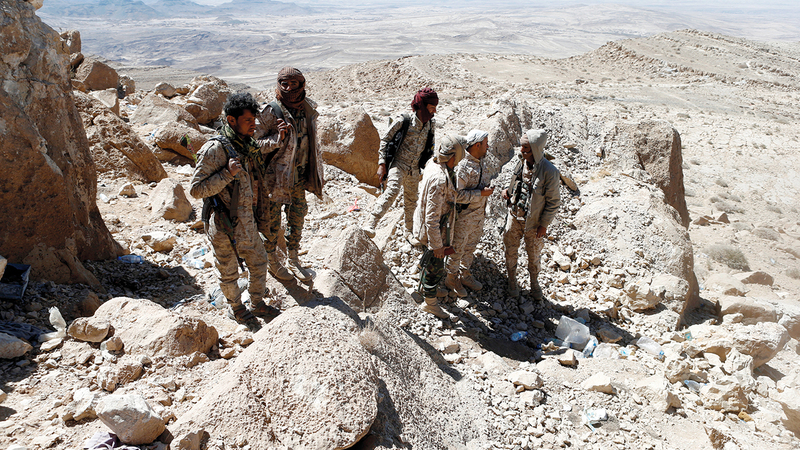 Members of the Yemeni army on one of the fighting fronts against the Houthi militia.

The UAE has expressed its strong condemnation and denunciation of the attempts of the Iranian-backed terrorist Houthi militia to target civilians and civilian objects in a systematic and deliberate manner in the sisterly Kingdom of Saudi Arabia, through an aircraft bomb, which was intercepted by the coalition forces.

In a statement issued by the Ministry of Foreign Affairs and International Cooperation, the UAE affirmed that the continuation of these terrorist attacks by the Houthi group reflects its blatant challenge to the international community and its disregard for all international laws and norms, and the Ministry urged the international community to take an immediate and decisive stance to stop these repeated acts targeting vital installations And civil and security of the Kingdom, energy supplies and global economic stability, stressing that the continuation of these attacks in recent times is a dangerous escalation, and new evidence of the efforts of these militias to undermine security and stability in the region.

The Ministry renewed the UAE’s full solidarity with the Kingdom regarding these terrorist attacks, standing in one line with it against every threat to its security and stability, and supporting it in all measures it takes to preserve its security and the safety of its citizens and residents on its territory.

In addition, the Yemeni army forces and the tribes, backed by the Arab coalition, thwarted an attack by the Houthi militia towards their positions at the Ma'rib Dam front, concentrated in the Balk and Al-Bas regions, from the Al-Zour and Kofel fronts.

Field sources confirmed that the attack had thwarted and the militias inflicted many deaths after they were lured onto those fronts, and the coalition fighters were able to destroy their combat vehicles that they advanced, which led to paralyzing their movements and falling into a great trap.

The coalition fighters launched raids in support of the Yemeni army and the tribes in the vicinity of Ma'rib, which destroyed Houthi reinforcements and combat mechanisms in Al-Kasara, Al-Mashajeh and Sarwah, and provided air cover for the advance of the forces on the Al-Mushajih and Al-Kassara fronts.

Field sources reported that the militias suffered many deaths on the al-Kasara and al-Mashjah fronts, including four foreign fighters, while they failed to make any progress on the Kassara front, after launching more than 49 attacks within three months, so they turned their attack towards the Al-Sadd front.

According to the sources, the militias pushed 300 armed men last Friday evening towards "Wadi Al-Suhail", east of Al-Kasara. They were monitored and targeted by the army and the tribes, leaving dozens dead and wounded among the militias.

The Al-Mashjah front, west of Marib, witnessed battles, during which the Houthi militia suffered great human and material losses due to the army, tribes and coalition fire.

Informed sources revealed that the leader of the Houthi militia, called Abdul-Malik Al-Houthi, is in a hospital in Sana'a, to treat the emerging Corona virus (Covid-19), but the militias are keeping the news.

In Taiz, the Yemeni army and the resistance forces managed to take control of Tabat al-Shiki, and the village of Zubaida in the Maqabneh front in the west, after they launched an attack on Houthi positions, which left 35 dead and wounded in the ranks of the militias, and destroyed a combat vehicle.

And in the Al-Jund area, east of Taiz, the day before yesterday, clashes took place between Houthi elements from Dhamar Governorate and others from the region, against the background of influence and money, which left their members wounded.

In Saada, the Yemeni army forces thwarted a Houthi attack on their positions in the Malahiz front of the Al-Zahir District, through which they tried to achieve gains on the ground to raise the morale of their members on the Marib and Al-Jawf fronts, but they failed as a result of the steadfastness of the forces stationed on those fronts.

In Sana'a, the Houthi militia carried out 26 of its members, including field leaders, who were killed on the battlefronts in Marib and Al-Jawf.