Czech police are searching for the two men suspected of attempting to poison Sergei Skripal in Salisbury, England in 2018. The two Russian intelligence officers are suspected of being involved in an explosion of an army depot in the Czech Republic in 2014. 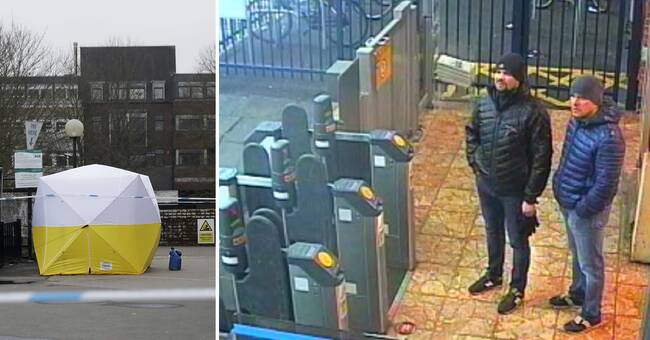 The Czech Republic believes it has been proven that Russian intelligence was behind the bombing that killed two people seven years ago.

The two men were in the country and near the army store when it exploded, reports the BBC.

They are now wanted by Czech police, who went out with pictures of the men, who they believe are involved in the act.

In Salisbury 2018, the same men are suspected of poisoning a door handle with the nerve agent Novichok that made the former Russian agent Sergei Skripal and his daughter Julia Skripal ill.

A woman died in the same crank after finding and picking up a perfume bottle that contained the nerve agent.

The men themselves denied involvement in Russian television, and said they were in Salisbury to watch the city's cathedral.

- We are in a similar situation as the UK after the poisoning attempt in Salisbury 2018, says Czech Foreign Minister Jan Hamáček according to the BBC.

Support from the UK and US

"Our Czech allies have revealed how far the GRU is willing to go in its attempts to carry out dangerous and harmful operations.

This reveals a disturbing pattern of behavior that follows the attacks in Salisbury. "

The US embassy in Prague also expresses its support for its ally the Czech Republic, and writes in a press release that it appreciates that they "let Russia pay for their dangerous actions on Czech soil", reports Reuters.

The Czech Republic will talk about the suspicions against Russian agents during the EU's digital foreign ministers' meeting on Thursday.

"Russia sees itself as a encircled state"

Russia denies allegations of explosion in 2014 and warns of damaged relations with the Czech Republic following the deportations.

- As usual in this type of event, we return with response measures, says Leonid Slutsky, chairman of the State Duma's Foreign Affairs Committee according to TT.

This is the latest in a series of incidents between Russia and other countries that show that Russia is more and more isolated, according to Bert Sundström, SVT's Russia correspondent.

- They are starting to see themselves more and more as a kind of encircled state that must keep the guard up against a malicious world, he says.

The fact that the Czech Republic is expelling 18 Russian diplomats for an incident that took place seven years ago can be seen as a signal policy, says Bert Sundström.

- It can be seen as a way to show Russia: "We know you were involved, here you get our reaction" roughly.