An episode of the series "Choice 2", which dealt with the dispersal of the Rabaa Square sit-in in Cairo, brought back painful memories for millions of Egyptians who witnessed this bloody day, which witnessed the killing and wounding of thousands of protesters. 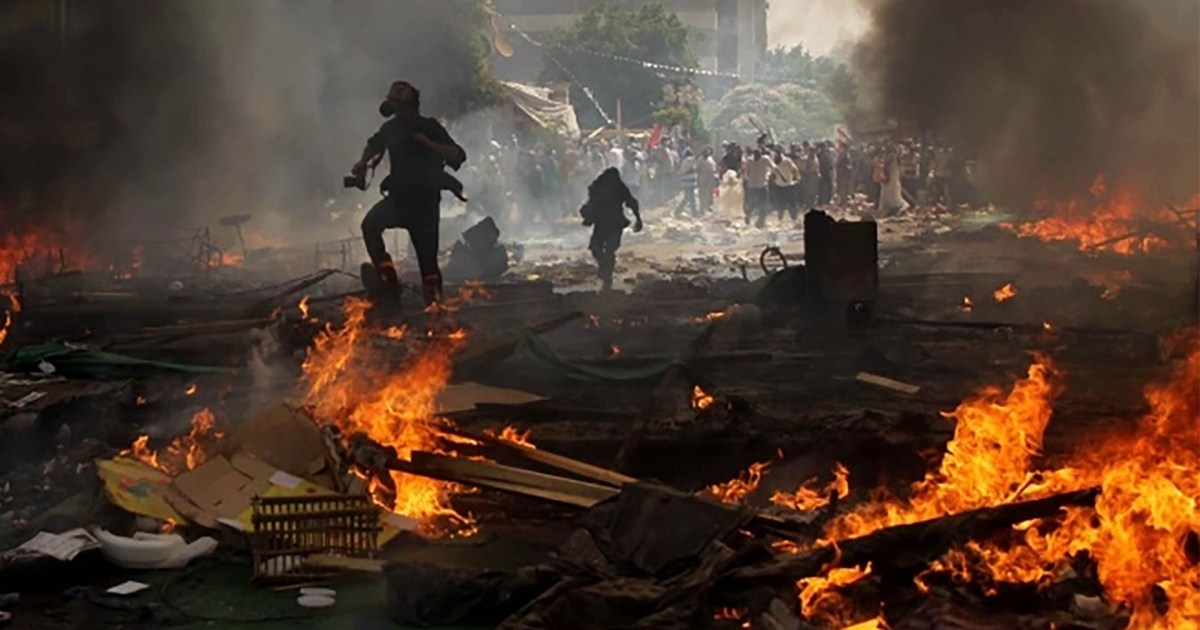 The fifth episode of the series "The Choice 2", which was broadcast on a number of Egyptian and Arab satellite channels, which dealt with the events of the Rab'a sit-in dispersal, brought back painful memories for millions of Egyptians, who witnessed that bloody day, and ended according to the lowest estimates, which are those issued by the National Council for Rights Humans (government) killed 632 people, and about 4,400 injured.

The series produced by the United Media Services Company "Synergy" headed by Tamer Morsi, which serves as the media arm of the Egyptian Intelligence, especially the episode that was broadcast yesterday, which not only led to distress among many, but also returned to the facade the societal division around the incident. Social communication is a state of great variation in dealing with the series.

A spokesperson for Synergy announced yesterday that the fifth episode of the series "The Choice 2", which witnesses the events of the Rab'a sit-in dispersal, will be broadcast without advertising breaks, as it "contains important events that have passed in the history of Egypt, and accordingly the decision was to waive the outcome of the advertising breaks in advance. " According to him.

Activists and intellectuals in broadcasting the TV episode anticipated that what is presented in this series is a failed attempt to distort history, which will continue to be mentioned that the dispersal of the Rab'a sit-in is the worst massacre in modern Egyptian history.

A real and sad thing, what insistent country may impose its narrative even if it reopens the largest trauma to which all who live here are exposed

The biggest massacre in the contemporary history of Egypt, the biggest moment of polarization and charging of violence, and encouragement for people to engage in violations and perform a police performance on some, to be celebrated on television in the month of Ramadan, and people eat Qatayef

# Rabiaa is a premeditated massacre, and it will not change its reality. A series in which artists get millions involved in changing a history that is still recent.

The blood of the victims is stronger than the drama faking!

The Rabaa massacre and the mass killing of protesters in Egypt |

# Sisi will not escape his crime, which he deliberately committed, as

she is chasing him pic.twitter.com/US0bgxJc5M

The Human Rights Watch report "According to the Plan" described the Rabaa Al-Adawiya sit-in dispersal massacre as the largest mass killing carried out against protesters in the modern era. The report stated that the crimes committed amount to "war crimes"

# The fourth massacre will remain.

I hear about someone visiting a distant date, but the idea of ​​falsifying a reality that occurred only several years ago and was documented by hundreds of videos, and the death toll, according to the government personally, is the largest in modern Egyptian history.

Social media platforms in Egypt witnessed after the broadcast of the series a wide range of activity from those who opposed it, who re-posted videos of the real dispersal of the sit-in through the hashtags "Rabaa Massacre" and "Choice 2 ″" and other hashtags, which topped the trend of "Twitter" for short tweets; to counter what They called it "Fake Snapshots and Events" in the series.

Arab and Egyptian activists from various political orientations tweeted to confirm the failure of the series to erase the memory of a fourth, which was and will remain alive in the conscience of the world, which will not forget the killing and burning of innocent people by the police and the army under the supervision of Abdel Fattah El-Sisi, the current president of the republic, who was then defense minister.

The language is too weak to describe what happened on August 14, 2013. The word "massacre" is less than the war crime committed by the state.

Al-Sisi, the army and interior commanders, members of the special forces, the parachute squad and snipers, who split up children, women and men standing in front of the bulldozers responsible before our Lord and before the people.

Oh, the series # Al-Ekhtiar 2, the scenes, will you answer them in the episode. Do you not want to see the dramatic plot, and will you sabotage your plan to distort a fourth sit-in?

In general, we will publish everything instead of you. We did not forget, nor did it wash our brain with ease. # Fourth_mathpic.twitter.com/AqpvuZaLPU

Live scenes broadcast live and documented by the world's cameras for the ugliest massacre that took place in contemporary history # Rabaa, no scenes filmed by Kombars in a cheap attempt to erase their shame!

The Rabaa massacre will remain a historical disgrace, not only against the Egyptian army, Sisi, or the Ministry of the Interior, but on all of us, for all the Egyptian people who witnessed this massacre and did not hold those who participated in it and killed people accountable. # The choice is for Bani Adam to have a conscience # Fourth_ Massacre_Innocent # The fourth massacre # The Fourth Massacre # Fourth pic.twitter.com/jGOdTZs4gD

from the series The Choice on the dispersal of the Rab'a sit-in # Rabaa massacre pic.twitter.com/pf1EMYXBPT

You may succeed in deluding some people from the truth for a time, but do you think that the angels did not write !!

And that the Lord did not testify !!

And that newspapers will not be published !!

And that the scale will not be erected !!

I am ignorant of you and what a foolish person who helps you against your tyranny !! # Rabaa_ massacre # Rabia_was_ massacre pic.twitter.com/v58mBO1VQY

Al-Sisi, the butcher, and the military clique believe that the drama will clear the grievances of the dead, the fourth massacre, and

change history in the scenario of the series.

Their crimes are preserved in sound and image, and their witnesses are alive.

This is in this world ..

As for the hereafter

al-Hasib is knowledgeable, the watchdog. # The choice # the dispersal of the fourth massacre, the drama of Ramadan

On the day of "Rabaa" Al-Sisi burned innocents alive .. This is the truth, and otherwise, it is the exact lie!

You who blessed, supported and supported the coup in Egypt and defended the positions of your rulers regarding the massacres that followed that coup, and if it were silenced, it would be better for you

* I repeat: “The fourth massacre was the Criterion. Is the balance.

The regime understands very well, that it governs Egypt with the legitimacy of the praises.

The energetic group that decided to revive the ugliest memory that happened in the modern history of Egypt in the form of trivial speeches in the form of serials aimed at transforming the carnage into a great national achievement.

The selection series will go to the dustbin of history and will be taught as a model for falsifying the facts, and its fourth massacre

will remain a model as the largest level of violence practiced by an armed authority against a group of people.

You will prefer your long life mockery, deficient, and little in the eyes of your soul, before the eyes of creation, you will visit history, and those who have witnessed it are still living, O Fajra!

Do you kill them twice?

We are witnessing by God that # Rabaa massacre and that you are murderers, and on the first Thursday after Ramadan we have a first episode entitled # Choice 2 to see billions of falsehood or the simplicity of truth # Rabaa 💕

On the other hand, the pro-regime media praised the series, and said that it documented the events of the Rab'a sit-in dispersal with great craftsmanship, and a number of them confirmed that the series "Choice 2" is a painful and painful blow to the heart of terrorist organizations, and everyone who finances, supports, supports and sympathizes with them.

The journalist Nashat Al-Daihi, who is close to the Egyptian regime, praised the series, and said in his program "Paper and Pen" on the "TeN" satellite channel that those he described as the Brotherhood militia were the ones who fired the first bullet in the Rab'a dispersal in the chest of an Egyptian officer, to fall as a martyr, adding All this destruction and killing were documented in a dramatic context in the fifth episode of the series "Choice 2".

In turn, the journalist, Lamis Al-Hadidi, who is close to the regime, said through her program "Last Word" broadcast on the "Extra News" satellite channel, "All generations must see this historical epic, and it must be taught in schools, as we do not teach what is done." By Hassan Al-Banna (founder of the Muslim Brotherhood), it is imperative to teach what the Brotherhood committed in a fourth crime, and a fourth was a terrorist focus. "

After watching the fifth episode, I

that His Excellency President # Abdel Fattah

humorous hero possesses a tactic of my political intelligence.

May God Almighty send him to our country to save him from the terrorist brothers and its allies and financiers Qatar and Turkey. His

sovereignty did for our country unless a president in the world did. .twitter.com/dSXtqgBujo

The great June 30 revolution exposed you and revealed your shame in front of the Egyptians who deceived them with your lies for more than 80 years, and the reaction of the Egyptians to the episode # Choice 2 is the biggest proof that you have been stripped naked, and all Egyptians see you as mere traitors, dishonest liars, murderers, and religious dealers .. and I do not see that .. Blind with brother eyes # My dream

- The first two martyrs during the dispersal of the fourth sit-in "The sacrifice of the people of Egypt" .. # Long live Egypt ✌️🇪🇬 pic.twitter.com/H0cpzuI4qu

After all that I have seen from 2011 until now,

Egypt, which God protected with His divine self,

then its army, police and intelligence,

At the dawn of August 14, 2013, the Egyptian police backed by army forces dispersed the sit-in of supporters of the ousted President Mohamed Morsi in Rabaa Al-Adawiya Square (east of Cairo), after more than 48 days that the protesters had spent there.

This left large numbers of dead and wounded, and after 14 hours it took the dispersal of the sit-in, estimates of the number of dead were numerous.

The forensic medicine announced, in an official statement, on November 5, 2013, that the total number of victims was 377, including 31 unidentified bodies, while the National Council for Human Rights (governmental) issued a report in which he said that the number of people killed in the Rabaa Al-Adawiya sit-in was 632. 8 policemen were killed.

On the other hand, unofficial sources presented much higher numbers than those circulated by official circles, as the coalition in support of the late President Mohamed Morsi announced on August 15, 2013 that the total number of deaths in the dispersal of the Rab'a sit-in alone amounted to 2,600 people, which is the same number that the field hospital issued. In a fourth time.

The sit-in was dispersed about a month and a half after a coup led by current President Abdel Fattah El-Sisi when he was Minister of Defense on July 3, 2013, when the constitution was suspended, and Morsi was dismissed after one year in power as the first elected civilian president in modern Egypt.