Navalny spokesman: he is dying, a matter of days

Biden: Navalny situation totally unfair&nbsp; Navalny in prison threatened with force-feeding Facebook blocks Alexei Navalny's mother account for posting about her son's health Share April 17, 2021Aleksei Navalny risks cardiac arrest "at any moment": his health is rapidly deteriorating, his doctors warn, asking for immediate access to the dissident, the most famous prisoner in Russia. Since March 31, President Putin's opponent has been on h 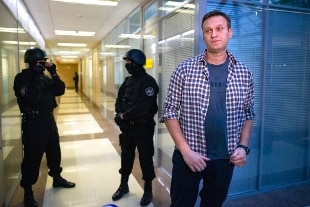 April 17, 2021Aleksei Navalny risks cardiac arrest "at any moment": his health is rapidly deteriorating, his doctors warn, asking for immediate access to the dissident, the most famous prisoner in Russia. Since March 31, President Putin's opponent has been on hunger strike to demand adequate medical treatment for the back pain and numbness of hands and legs that plague him in prison.

The situation of the Russian opponent Alexiei Navalny is "totally unfair": the president of the United States of America, Joe Biden, told reporters in response to a question about the worsening conditions of Navalny in prison.

Navalny, 44, was jailed in February and is serving two and a half years on old embezzlement charges in a penal colony in the city of Pokrov, some 100 kilometers east of Moscow.

"Our patient can die at any time," Ashikhmin wrote on Facebook, pointing to the opposition politician's high potassium levels and saying Navalny should be moved to intensive care. "Fatal arrhythmia can develop at any time."

Navalny barely survived a poisoning with the nerve agent Novichok in August, for which he blamed the Kremlin. His doctors say his hunger strike may have exacerbated his condition. Having blood potassium levels above 6.0 mmol (millimole) per liter usually requires immediate treatment. Navalny's are at 7.1, doctors said.

"This means both impaired kidney function and severe heart rhythm problems can happen at any time," Vasilyeva's Twitter account reads. Doctors said he must be examined immediately "taking into account the blood tests and his recent poisoning."

Navalny's spokeswoman Kira Yarmysh, who accompanied him when he collapsed on a plane after the poisoning in August, said the situation was critical again. "Alexei is dying," he says on Facebook. "With his conditions it's a matter of days". The spokesperson added that she felt as if he was "back on that plane, only this time he is landing in slow motion", noting that access to Navalny is limited and few Russians know what happens to him in prison.

About 70 artists, writers and actors, including Nobel Prize winners Svetlana Alexievitch and Salman Rushdie, have issued an appeal to Vladimir Putin for urgent medical treatment to the opponent Alexei Navalny who is on a hunger strike in prison. The opponent's state of health "is deteriorating rapidly and needs urgent medical attention", reads the document published on the Le Monde website. "We appeal to you, Mr. President, so that Navalny will immediately receive adequate medical attention and the urgent care he needs and to which he is entitled like all Russian citizens". Among the signatories also JM Coetzee, Jude Law, Vanessa Redgrave, JK Rowling, Arundhati Roy.

Navalny's team previously announced plans to stage what they said would be "the biggest protest in modern Russia". Navalny's allies said they would set a date for the protest once 500,000 supporters registered on a website. As of Saturday, more than 440,000 people had signed up. Yarmysh on Saturday urged more Russians to sign up, saying a large rally could help save Navalny's life. "Putin only reacts to mass protests," he added.

Earlier in the week, Navalny's wife Yulia, who visited him in the penal colony, said that her husband now weighs 76 kilograms: he has lost 9 kilograms since the start of the hunger strike.