Wall Street opens its doors to Coinbase, the cryptocurrency platform

Debut on Nasdaq Coinbase Global, the group that controls the cryptocurrency exchange platform: it is the official entry of digital currencies into the 'good living room' of finance. The global digital currency market now exceeds the Italian GDP 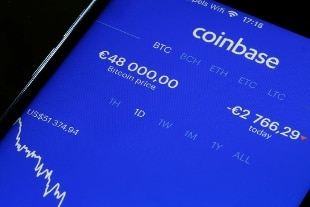 April 14, 2021Coinbase Global Inc., the largest cryptocurrency exchange platform in the United States, debuts on Nasdaq and marks a

in the history of virtual currencies: from niche technology to mainstream assets.

per share, for an overall valuation of the company of approximately 65.3 billion dollars.

The listing is by far the largest ever attributed to a cryptocurrency company.

Coinbase, founded in 2012, headquartered in San Francisco, had announced a volume of transactions on the private market last March that brought the company to a market value of

, a notable leap from $ 5.8 billion in September 2020. The platform claims 56 million users worldwide and approximately $ 223 billion in assets, or 11.3% of the cryptocurrency market share.

Coinbase's listing on the New York Stock Exchange marks a turning point for cryptocurrencies to enter the parlor of traditional finance, which only a few years ago feared or snubbed them, according to most of the opinions of investors, analysts and monetary authorities.

Now everything has changed: "The listing is significant as it marks the growth of the industry and its

Prices of Bitcoin (BTC), the first cryptocurrency and the largest by market value,

on Tuesday, reaching $ 63,661 on Tuesday afternoon, based on data from CoinDesk. 20. Ether, the native cryptocurrency of the Ethereum blockchain and the second largest ever, also set a new record of $ 2,271.

With the jump of almost 6% in the last 24 hours, pushed by the umpteenth record of Bitcoin, a new high has been reached for the

which has reached a capitalization close to 2.250 billion dollars,

The Coingecko observatory - which follows the prices of almost 7 thousand cryptocurrencies - has recorded a series of dizzying leaps even for lesser-known cryptocurrencies such as the Renewable Electronic Energy Coin, which grew by almost 25,000% in a single session, transforming an investment $ 100 in a yield of $ 25,000 in just 24 hours).

There have been huge increases for the best known as XRP, which has a market capitalization of nearly $ 84 billion and jumped 33% in one day.

In the background, Coinbase's expected debut on the stock exchange, which marks, despite years of skepticism, the definitive affirmation of these instruments, still awaiting official regulation.