China News Service, April 10th. The reporter learned from China National Railway Group Co., Ltd. (hereinafter referred to as "National Railway Group") that from 0:00 on April 10, a new train operation map will be implemented across the country. The new map actively adapts to the reality of the increasing demand for passenger and cargo, accurately provides transportation products, greatly reduces 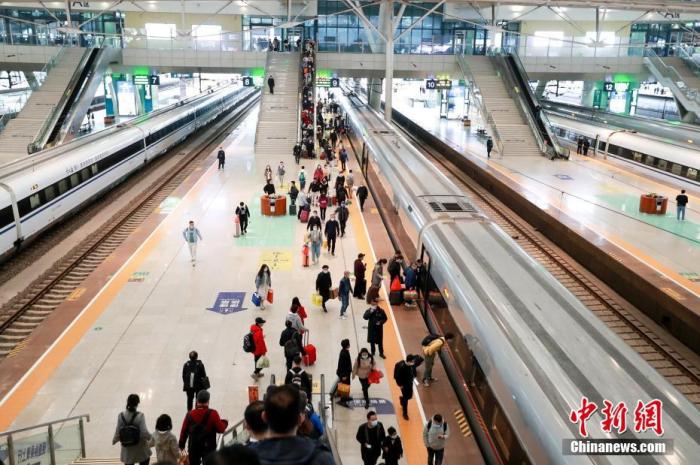 The new map actively adapts to the reality of the increasing demand for passenger and cargo, accurately provides transportation products, greatly reduces the travel time between some cities, adds direct trains for bulk cargo across bureaus, expands the scale of new land and sea corridors, and improves the quality of passenger and cargo transportation services for the people. The stable operation of the economy and the production and life of the people provide reliable transportation guarantee, and also make more contributions to "carbon peak and carbon neutrality".

Data map: On April 5th, passengers were preparing to take a high-speed train on the platform of Wuhan Railway Station.

The first is to give full play to the advantages of the high-speed rail network, and travel time between some cities has been greatly reduced.

Second, some high-speed railways have implemented quality improvement projects, and the travel experience of passengers has been further improved.

The Xiamen-Shenzhen high-speed rail will run at a speed of 250 kilometers per hour, and 7 pairs of Shenzhen-Xiamen express trains will be added. The fastest time between the two places will be 2 hours and 30 minutes, and 43 minutes will be reduced.

At the same time, 3 pairs of high-quality cross-line intercity trains will be arranged from Chaoshan area to Shenzhen and Guangzhou.

The Xiamen-Shenzhen and Nanguang high-speed railways simultaneously launched new flexible, convenient and economical ticketing products such as ticket counting, further optimizing the equipment and facilities of stations along the line, and making passenger travel more convenient and comfortable.

The third is to operate buses according to the "one map per day" to accurately meet market demand.

Strengthen the dynamic analysis of the implementation of the basic operation diagram, increase the transportation capacity in popular directions in time, organize the operation of red tourist trains, and optimize the passenger car operation plan according to the "one map per day".

The fourth is to optimize the train operation structure and increase the number of direct trains for bulk cargo across the bureau.

Make full use of the large-scale transportation capacity of ordinary railways released after the high-speed rail network is formed, and combine the transportation volume of “road to railway” and the needs of flood prevention, optimize and adjust the structure of ordinary railway passenger and freight trains, arrange for the opening of 294 inter-administrative bulk cargo direct trains, and expand There are more than 200 freight trains in large coal transportation corridors such as Hohhot, Haoji, and Wari, making more contributions to "carbon peak and carbon neutrality".

At the same time, we will further optimize the China-Europe train operation plan, expand the scale of the new land-sea route, improve the quality and efficiency of train operation, and ensure the stability and smooth flow of the international supply chain.

The railway department reminded that after the adjustment of the map, the service information of passenger trains and freight trains, passengers and cargo owners can inquire on the railway 12306, 95306 website, client, WeChat and other channels, or pay attention to the dynamic information released by the railway departments and major trains. Station announcement, so that reasonable arrangements for the itinerary and cargo transportation matters.