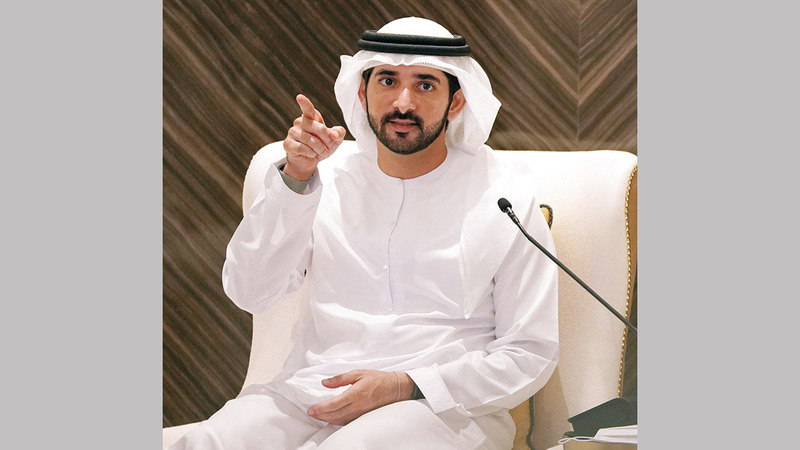 The Crown Prince of Dubai hands the flag to "Dubai Electricity"

His Highness Sheikh Hamdan bin Mohammed bin Rashid Al Maktoum, Crown Prince of Dubai and Chairman of the Executive Council, affirmed that the changes the world is witnessing require strengthening efforts to provide innovative ways to improve services and develop government work performance, leading to translating the insightful vision of His Highness Sheikh Mohammed bin Rashid Al Maktoum, Vice President and Prime Minister of the State and Ruler of Dubai, which aims to enhance performance and improve the services provided to customers, keep pace with future requirements, and harness all necessary ingredients to meet the expectations of customers and community members, and consolidate Dubai's position within the ranks of the most pioneering cities in the field of government services, appreciating the efforts of the work teams Government agencies and their proactive initiatives to achieve public happiness, which is the true indicator of the quality of government services, directing His Highness the government agencies to continue work on developing services, to keep pace with the aspirations of customers in accordance with the highest international standards and practices, and to strengthen the spirit of one team.

This came during the handing over of His Highness "the banner of the Hamdan Bin Mohammed Program for Government Services 2020" to the Dubai Electricity and Water Authority, as the government agency that won the best government initiative for the "Smart Life" initiative, during the ceremony of "Hamdan Forum 2020" organized by the "Dubai Model" center. Affiliated to the General Secretariat of the Executive Council.

His Highness Sheikh Hamdan bin Mohammed bin Rashid Al Maktoum said that the world lived under exceptional circumstances during the past year that left great challenges and left clear effects, and Dubai was able to turn these challenges into opportunities, and government agencies showed great flexibility in their response to these repercussions, to form A model to be emulated in the ability to conduct business and provide services according to the highest standards.

His Highness added: "Whatever challenges, our aspirations will touch the sky. Our ambitions are without limits, and our endeavor is continuous for development and improvement, and we have no end line."

His Highness directed his speech to the representatives of the nominated government agencies, saying: “With your sincere efforts and proactive ideas, Dubai continues its flight in the sky of leadership, and no challenge will prevent it from achieving its plans to reach its desired goals and achieve its development goals.”

His Highness congratulated the winning government initiative that sets new standards for leadership and innovation in government work, thanking His Highness the leading government agencies that continue their absolute commitment to the happiness, positivity, transparency and team spirit approach to achieve ambitious aspirations for customer happiness.

His Highness presented the banner to the Dubai Electricity and Water Authority, appreciating the sincere efforts made by the authority's team, and his Highness blessed its deserved victory for the flag for this year, and its obtaining the largest number of votes from the public, expressing his happiness with the active participation of the community, stressing that he is a key partner in developing Government services.

In turn, the Secretary-General of the Executive Council of the Emirate of Dubai, Abdullah Al-Basti, affirmed that winning the banner of the Hamdan Bin Mohammed Program for Government Services is the culmination of a year-long efforts of diligent work by government agencies with the Dubai Model Center to improve services in accordance with international best practices, and in a way that exceeds the expectations of customers. .

It is noteworthy that eight initiatives were nominated for the final stage of the evaluation to compete for the "banner of the Hamdan Bin Mohammed Program for Government Services 2020", the first "Smart Life" from the Dubai Electricity and Water Authority, and aim to promote a smart and sustainable energy lifestyle among citizens and residents of Dubai, and empower customers. From monitoring and controlling proactively their use of electricity and water, it contributed to reducing the cost of service by 20%, canceling the waiting time, reducing the time to complete the service to less than three minutes, and improving the quality of service to 94% instead of 88%, and 618 thousand and 913 customers benefited from its application.

The second is “Criminal Status Research”, provided by Dubai Police, and aims to employ qualified human resources, systematic processes for services, and digital transformation that encompasses the latest technologies, channels and digital platforms, in order to upgrade the criminal case search service to be 100% digital that enables the customer to complete the service in simple steps. It contributes to achieving the highest level of quality and global leadership, reducing service delivery time from five days to five minutes, reducing its cost by 65% ​​to reach 200 dirhams, targeting 93% with the customer satisfaction index, and 100,000 customers benefited from it last year.

The third is "Tarabet", presented by the Roads and Transport Authority in Dubai, and concerned with planning public transport, service and information channels, public transport infrastructure, and adding new integrated transport routes. The initiative achieved an improvement in the efficiency of the Suhail application’s response by 96%, and reduced the response time from six seconds. To 0.2 seconds, and contributed to raising customer satisfaction to 90%, and 112,392 merchant trips were affected by the initiative in the third quarter of last year.

The fourth is "smart evaluation" provided by the Land Department, which focused on increasing the speed of the evaluation process from the time the request was received to its completion without submitting any documents through the integration of local databases and external systems, and reduced the time for service completion from 14 days to less than 24 hours. It achieved 100% by the customer satisfaction index, and 100% on the quality of service, and 763 transactions were submitted through the initiative during the third quarter of last year.

And the fifth, "Smart Salem Center", provided by the Dubai Health Authority, provides a unique facility for medical fitness and occupational health services, where clients can take their medical tests in a seamless, paperless environment.

The initiative contributed to reducing the procedures time from 25 to 15 minutes, and aims to achieve 92% of the customer happiness index instead of 78%, and 150 customers benefited from it during the third quarter of last year.

And sixth, "automatic renewal" provided by the Department of Economic Development, to facilitate and simplify the renewal of the commercial license, so that the renewal is in one step within two minutes to meet the needs of the current and potential business community by receiving a text message to renew the license and pay electronically. The initiative reduced the renewal cost by about 60%, and obtained 90% in the customer satisfaction index, and 829,94 licenses benefited from the initiative over five days.

The seventh is the “Guidance Service and Virtual Tours for Museums” provided by the Dubai Culture and Arts Authority. The initiative includes direct virtual guided tours that allow school groups and the general public to reserve virtual sessions to tour in six museums. The service received 97% in the customer satisfaction index, and 295,687 benefited from it. Traded over a period of three days.

The "Qout" initiative, presented by Dubai Municipality, focuses on conducting a high-precision test for ready-to-eat foods to detect foodborne pathogens, reducing the time required to release shipments, and has contributed to increasing the percentage of samples that conform to specifications to 93%, canceling paperwork, and raising satisfaction Dealers reached 100%, and 823,747 transactions were affected by the initiative last year.

Findings of the International Committee of Experts

The banner of "Hamdan Bin Mohammed Program for Government Services" is delivered to the government agency that gets the highest total in the results of the international experts committee and the results of customer evaluation, and for a whole year, so that it is raised in front of the entity's main building, and it is kept for a year and delivered to the party that wins the banner. In the following year.

The list of government initiatives nominated for the program went through a series of evaluations prior to the audience evaluation stage, where the primary axes for evaluating services included a set of criteria that measure the results of efficiency, effectiveness, sustainability, and the extent of adherence to the government's entrepreneurial approach, which was held this year remotely by the jury that included International and local assessors, with the aim of developing comprehensive perceptions about the extent of the impact of these services in the short and long terms, and measuring performance indicators for each initiative, according to the Dubai Model methodology for improving government services.

The “Hamdan Bin Mohammed Program for Government Services” seminar was previously organized remotely, to learn more about the nominated initiatives from the authorities, appreciate the efforts made to improve government services, and learn about the achievements through the initiatives launched by government departments and agencies.

During the meeting, a large number of customers were selected from the target audience, and they shared their evaluation, opinions and suggestions on the importance of the nominated initiatives.

She congratulated the first director of the Dubai Model Center, Eman Al-Suwaidi, of the Dubai Electricity and Water Authority, for obtaining the "banner of the Hamdan Bin Mohammed Program for Government Services 2020", noting her happiness with the active participation of the public in voting on the best initiative.

She stressed that the efforts of the Dubai Model Center focus on improving government performance towards new prospects for the future, and enhancing the readiness of government agencies to continue their work at the same level of competence in various circumstances and challenges, and in accordance with the highest standards, noting that these efforts resulted in ensuring the continuity of the work of government agencies in the emirate. Despite the repercussions left by the global pandemic.

She explained that the center aims, by working during the year on the improvement cycle for government services, to raise the level of public services in the emirate to unprecedented levels, to be among the best in the world. Its services are made with innovative initiatives to impress its customers.