EU, still controversy on the 'sofagate'. Ankara: "Protocol was followed"

Unjust accusations against Turkey, says the foreign minister, while the spokesman for President von der Leyen specifies: incident not to be repeated 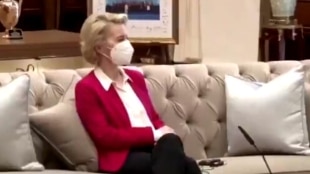 08 April 2021After the controversy over the so-called 'sofagate', Turkish government sources specified that during the visit to Ankara by the presidents of the Commission and the EU Council, Ursula von der Leyen and Charles Michel, "the standard protocol was followed".

This was stated by the Turkish Foreign Minister, Mevlut Cavusoglu, about the case that opened during the talks in Ankara between Turkish President Recep Tayyip Erdogan, Charles Michel, one next to the other on golden chairs, and Ursula von der Leyen , remained standing waiting to find a place on a sofa in front of Cavusoglu.

"It is not the first time that Turkey has received guests - said the head of Turkish diplomacy in statements reported by the Daily Sabah - The protocol that is followed during the meetings in Turkey is the international protocol".

Cavusoglu insisted on "Turkish hospitality", which - he claimed during a press conference with his Kuwait counterpart, Sheikh Ahmad Nasser Al Mohammad Al Sabah - "is known throughout the world" and claimed that "requests have been accepted of the European part ".

"This means that the seating arrangement was defined on the basis of their indications," he added, referring to a meeting between "our protocol officers".

EU spokesperson: episode that must not repeat

"The president asked her team to take all precautions to ensure that this type of visit can soon take place without this type of episode happening again", said the spokesman of the European Commission, Eric Mamer, about the

Mamer specified that "the message we conveyed to the Turkish authorities was very clear and detailed: the fact that an episode occurred during this visit does not mean that it was not a successful visit" as far as the European Union is concerned. relations with Turkey.

`` Unfortunately a message of disunity was sent as the presidents were unable to be together when needed, '' reads the tweet about the distance between von der Leyen and Michel during the meeting with the president. Recep Tayyip Erdogan.

For this reason, the EPP asks for "a plenary debate on the recent visit of von der Leyen and Michel to Ankara".

The president of the EPP group Manfred Weber then stated that '' the visit to Ankara by presidents von der Leyen and Michel should have been a message of firmness and unity in Europe's approach to Turkey.

Unfortunately it translated into a symbol of disunity as the presidents were unable to be together when needed.