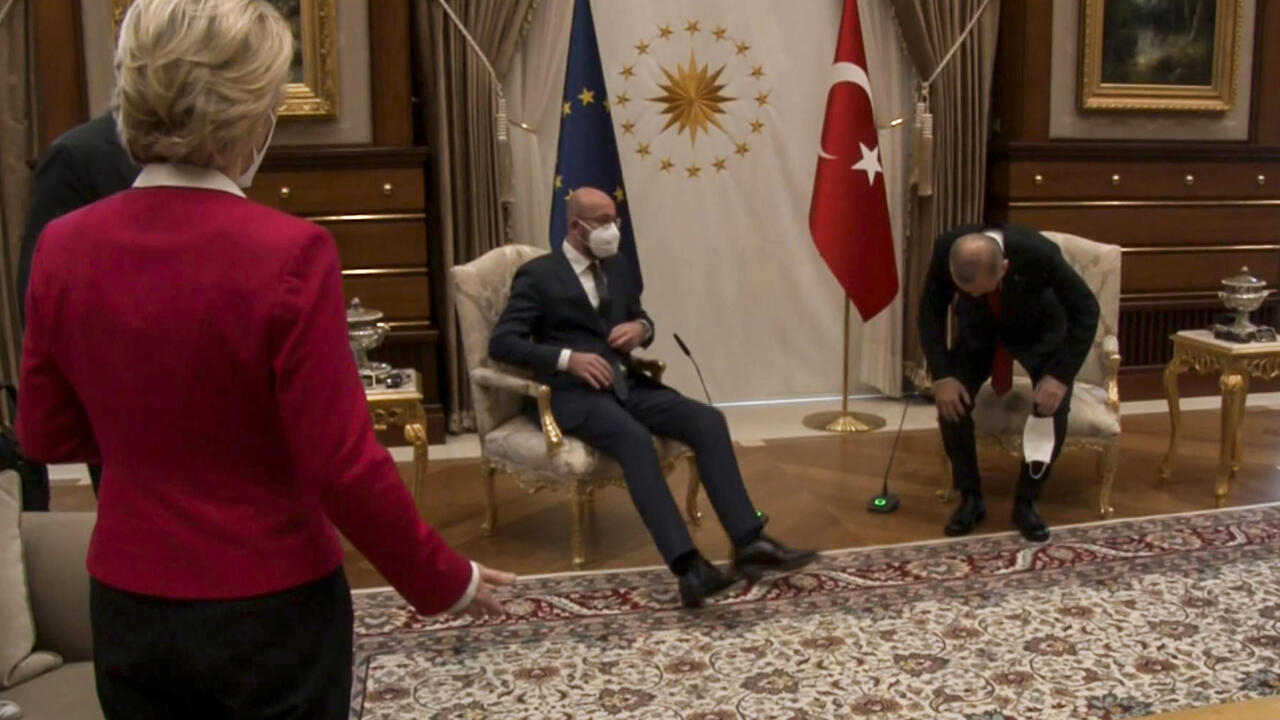 Brussels has already nicknamed this episode "the sofagate".

On Tuesday April 6, an affront was inflicted on the President of the European Commission, the German Ursula von der Leyen, during a meeting between the presidents of the institutions of the European Union and the Turkish leader Recep Tayyip Erdogan organized in Ankara .

She had to sit back on a couch, while the two men sat down on two armchairs side by side.

The scene, which was filmed, sparked controversy in Brussels.

"Ehm", murmurs the former Minister of Defense, apparently distraught, at the beginning of a video widely distributed on social networks.

She does not seem to know where to settle as European Council President Charles Michel and Turkish President settle into the two seats prepared for the meeting.

She finally opts for a slightly recessed sofa, in front of the Turkish Minister of Foreign Affairs, whose function is inferior to her in the protocol hierarchy.

"President von der Leyen was surprised. She decided to go ahead and prioritize the substance. But that does not imply that she does not attach importance to the incident," said Wednesday. April 7 his spokesperson, Eric Mamer.

"The presidents of the two institutions have the same protocol rank," he said, while the European Council let it be known that its president takes precedence over the Commission for international protocol.

"Ursula von der Leyen is waiting to be treated according to the rules of protocol and she has asked her services to ensure that this kind of incident does not repeat itself in the future," announced her spokesperson.

"It is up to the Turkish authorities, in charge of the meeting, to explain why this type of seat was offered to Ursula von der Leyen".

"No arrangements have been made other than those requested by an EU delegation which prepared for the visit," a Turkish official told AFP at the end of the day.

The rebuff comes at a delicate diplomatic moment, as the EU and Turkey seek to renew relations after a year of tension.

Europeans do not hide their concerns about violations of fundamental rights in Turkey and in particular the decision of President Erdogan to leave the Istanbul Convention on the prevention of violence against women and children.

At the end of the meeting, Ursula von der Leyen did not mince words during the press conference.

"I am deeply concerned that Turkey has withdrawn from the Istanbul Convention," she said.

"It's about protecting women, and protecting children from violence, and that's clearly the wrong signal right now," she added.

"Human rights issues are not negotiable".

The affront to the first woman to occupy one of the two highest posts in the EU has aroused the anger of several European elected officials in Brussels, who see it as a desire by the Turkish president to take over from Ursula Von der Leyen because of his gender.

"First they are withdrawing from the Istanbul Convention and now they are leaving the President of the European Commission without a seat on an official visit. It is shameful. #WomensRights", protested the president of the group. socialist in the European Parliament, the Spaniard Iratxe Garcia Perez, in a message on her Twitter account.

First they withdraw from the Istambul Convention and now they leave the President of European Commission without a seat in an official visit.

"Ursula von der Leyen's expression 'Ehm' is the new term for 'this is not how the EU-Turkey relationship should be conducted'," commented German environmental MEP Sergei Lagodinsky.

Charles Michel was not spared by the critics.

Dutch liberal MEP Sophie in 't Veld wondered why the President of the Council had remained "silent" while his colleague found himself without a seat.

In France, the rebellious French MEP Manon Aubry denounced the "incomprehensible passivity of Charles Michel who legitimizes this affront by not reacting".

Shameful staging of Erdogan who shows his contempt for women by humiliating @vonderleyen as Turkey leaves the Istanbul Convention against gender-based violence.

Incomprehensible passivity of @CharlesMichel who legitimizes this affront by not reacting.