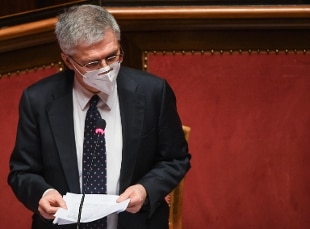 "We expect a recovery in the second quarter, which should gradually increase in the third and fourth quarters".

Thus the Minister of Economy Daniele Franco during the press conference at the end of the meeting of the finance ministers and governors of the G20.

Meanwhile, work continues to complete the Def which should be ready in the coming weeks.

"We will ask Parliament for a budget gap that will be used for a new decree aimed at giving further support to the economy and citizens," explained the Minister, adding that these interventions will also be linked to more structural measures, envisaged by the Recovery Plan and Resilience that the government intends to hand over to the EU by the end of the month.

While the evolution of the epidemic with a continuous swing, which creates uncertainty, has undermined the economy and for this reason the Government "is adopting measures to support economic growth", reiterated Franco.

Franco and Visco: Maintain aid to respond to financial uncertainty

In this phase "the recovery is full of uncertainties and with strong inequalities between countries. The G20 has renewed its commitment to delay the withdrawal of support measures", said the Minister of the Economy Franco.

Also for the governor of the Bank of Italy, Ignazio Visco, it is necessary that "most of the support measures remain in force, the withdrawal is not imminent, potential risks of instability linked to the removal are foreseen. The ministers and governors shared the uncertainty. on the evolution of the pandemic and the recovery of countries ".

So the withdrawal of the measures will be gradual and "unlike past recessions in this case the support measures have been effective. We must avoid that the weakest are hit".

The Minister of Economy, responding to a question about the requests of the US Treasury Secretary, Janet Yellen regarding multinational taxation, said: "it is consistent with the work that is going on in the G20 on two pillars, regarding global taxation, multinationals and fair distribution of revenue between countries.

The issue has been on the table for several years and what we are seeing this year is an acceleration. "

Debt suspension for poor countries extended to the end of 2021

it was decided to suspend interest payments on the debt of the neediest countries at the end. 2021. Franco explained that solutions are being sought to "fill financial needs in the health system globally." And to support the most vulnerable countries, the G20 then asks the Monetary Fund to present a proposal to assign new special drawing rights for 650 billion dollars in order to improve global liquidity and promote global recovery.