The highest EU leaders visit the Turkish President. In addition to restarting relations, it is also about the future of the controversial refugee deal. But in the negotiations, Ankara now needs the EU more than before on one central point. 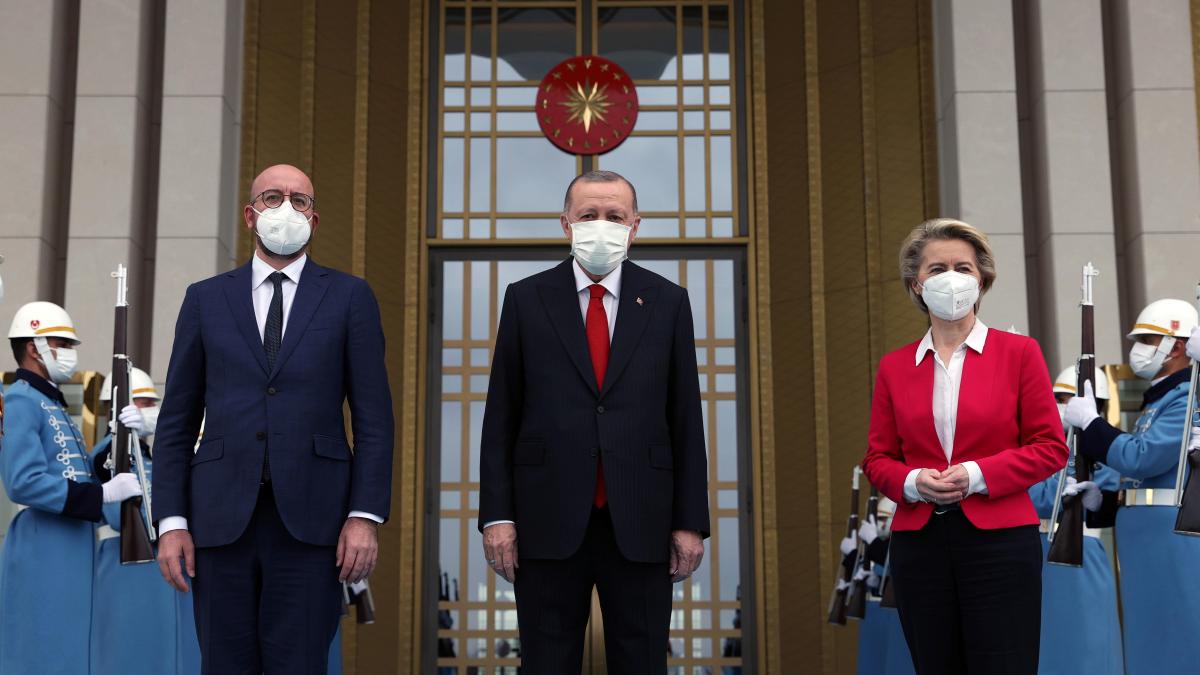 For the first time in years, top EU representatives traveled to Ankara on Tuesday and met with Turkish President Recep Tayyip Erdogan.

WELT answers the most important questions.

Why did von der Leyen and Michel travel to Ankara?

With the refugee agreement between the EU and Turkey of March 2016, both sides wanted to significantly improve their relations.

Expectations have only been partially met and tensions increased significantly again in the past year.

In November 2020, the Turkish President suddenly turned around: he whispered that Turkey “sees its future in Europe” and that relations with Moscow could never replace “the friendship with the USA that has grown over many years”.

There were various reasons for Erdogan's change of course.

First: The new US President Joe Biden is significantly more critical of Erdogan's antics than his predecessor Donald Trump, who always held his hand over him.

Second: Erdogan doesn't know how long he can rely on Russia for the wars in Syria and Libya.

Moscow and Ankara deeply distrust each other, even if they partially cooperate.

His country is more dependent than ever on investment and tourism income from Europe.

During a visit to Brussels at the end of January, Foreign Minister Cavusoglu made it clear once again: Ankara means business.

The background to this is the Europeans' distrust of Erdogan.

They basically consider him unreliable and unpredictable.

But after Ankara withdrew its ships in the gas dispute with Greece and Cyprus in January, the EU was ready to stretch out its hand.

Part of the planned gradual rapprochement is now also the visit of the EU leaders in Ankara.

Erdogan's most important advocate in the EU is Chancellor Angela Merkel.

What does Erdogan want from the EU?

He wants to ensure that European companies significantly increase their direct investments in Turkey as a result of more stable mutual relations.

He also wants to ensure under all circumstances that his country remains formally a candidate for EU membership - if the EU were to withdraw its candidate status, which is now often demanded, major international investors would immediately flee from Turkey.

Ankara also wants to intensify economic relations by expanding the so-called customs union and at the same time is striving to eliminate the visa requirement when Turks enter the EU.

The lifting of the visa requirement would strengthen Erdogan's position domestically, especially among young urban Turks.

The demands for visa-free travel and a modernization of the customs union are not new - but Europeans have remained tough for years in response to Erdogan's anti-democratic policies towards the opposition and his role in international conflicts.

What does the EU want from Erdogan?

The “positive agenda” that Europeans expect from Turkey includes the following points: Turkey continues to prevent uncontrolled migration from the Bosporus to the EU through rigorous border controls.

In Libya and Syria, Turkey is playing a constructive role in finding a peaceful solution to the conflicts - from Brussels' point of view it is particularly important that Turkey helps to ensure that no more migrants from Libya come to the EU in the future.

Ankara is also actively working on a solution to the so-called Cyprus question - the country has been divided since a Greek coup and a Turkish military intervention since 1974.

Turkey is not escalating further in the dispute over natural gas reserves in the eastern Mediterranean and is quickly clarifying sovereign rights with Cyprus and Greece.

In addition, Erdogan should reverse the "deterioration in democratic standards in Turkey".

What tactics is Brussels pursuing?

The EU is fundamentally ready for a fresh start in relations.

In Brussels, however, Erdogan is not trusted.

That is why the EU is choosing a two-pronged strategy: Should Ankara pursue a “positive agenda” in accordance with international law and actually abide by the agreements, Turkey will ultimately be able to obtain visa-free travel and much closer economic relations.

At least that is what it says diplomatically in the final declaration of the EU summit on March 25th.

Should Erdogan resume his confrontational course in the Mediterranean, economic sanctions could also threaten, which could further weaken the president domestically.

What do the critics say?

The FDP parliamentary deputy in the Bundestag, Alexander Graf Lambsdorff, said that this was not the time to reward Erdogan with “PR images”.

The second largest opposition party in Turkey, the HDP - which is currently threatened with a ban - is demanding that the EU take Erdogan to court.

The fact is: Erdogan has his back to the wall like never before.

The Europeans should take advantage of that and put him under pressure.

Recently, however, it seems that the EU is primarily interested in concessions from the Turkish government in foreign policy and domestic political conditions seem less important at first. Such a course would be fatal and would indirectly further strengthen Erdogan's anti-democratic policy.