MotoGp. At Losail it is still Yamaha, Quartararo lines up Zarco and Martin

Ducati Pramac passed in the final laps after a race in the lead. Vinales, penalized by a bad start, is fifth. Bagnaia makes a comeback but makes a mistake and has to settle for sixth place 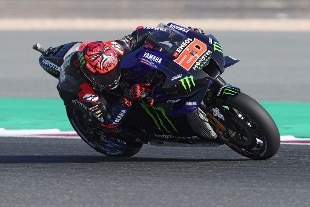 04 April 2021 Yamaha always comes out in Losail, but this time it is Fabio Quartararo who wins in the GP named in Doha and raced a week after the traditional one in Qatar.

On the podium Zarco and Martin, with the Frenchman who overtakes his teammate (for a long time in the lead) in the final sprint and guarantees himself the top of the world rankings by repeating the second place seven days ago.

Fourth was Rins' Suzuki ahead of Vinales (the winner of Qatar was penalized by a handicap start).

Sesto Bagnaia, who cherished a chance for the podium before making a mistake.

Race to forget for Valentino Rossi, only 16th.

Unfortunate departure of Vinales, who ends up in the belly of the group.

On the other hand, Aleix Espargaro was amazing, taking his Aprilia to third place, close to the Ducati Pramacs of Martin and Zarco (excellent start for the two leaders of qualifying).

After five laps and Rins' Suzuki begins to show up, passing Espargaro and then engaging in a wheel-to-wheel battle with Zarco.

Meanwhile, the official Ducatis of Bagnaia and Miller begin their ascent.

While Espargaro loses ground, the Turinese on lap 13 catches third place against Rins, who also passed by Quartararo.

Fighting with the French, Bagnaia makes a mistake in turn 1 and falls to seventh place.

Miller tries to fight for the podium, but Vinales arrives, very fast as he did last week in the final laps.

Four laps from the flag Quartararo takes the lead by jumping over the two Pramacs.

Vinales fights for the podium, but ends up losing position to the detriment of an attentive and regular Rins.